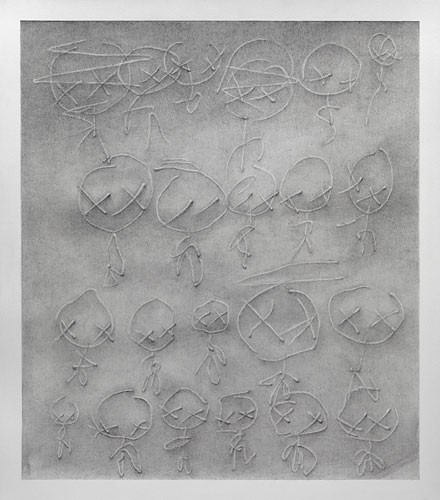 Luhring Augustine is pleased to present David Musgrave's first solo exhibition in New York. Through drawings and sculptures created over the past two years, the artist explores his ongoing preoccupation with the abstraction inherent in representation and the transformative capacity of materials.
Musgrave's work examines the relation between thoughts and things, ideas and objects. He produces images and forms that unsettle distinctions between inner and outer realms. The apparent accessibility of the simple human or animal schema that underpins much of his imagery forms a counterpoint to Musgrave's many-layered approach. His drawings often resemble documents of artifacts that hint at the primitive or the paranormal. Close viewing reveals a highly detailed evocation of fictive but perfectly plausible surfaces created with graphite.
Rope animal is a meticulous rendering of an imaginary sculpture depicted as an image on a folded sheet of paper. The bulky and tactile character of the conjured object is made almost immaterial by its passage through layers of representation. Musgrave achieves a similar effect by different means in Film, a multi-part aluminum sculpture of a figure that appears to be made of tape. He sculpts the same figure in 35 poses, ultimately creating a progression in which the figure turns over twice. The 'film' unfolds in the mind rather than in literal time and space.
Musgrave draws on what might appear to be opposed positions, fusing a pleasure in inventing form with rigorous, sometimes alienated processes of replication. His elusive imagery combined with his technical precision imbues the work with complex tensions, testing our notions of perception and subjective reality.
David Musgrave was born in Stockton-on-Tees, England, and lives and works in London. Recent exhibitions of his work include solo shows at Marc Foxx, Los Angeles and Sorcha Dallas, Glasgow. Musgrave's work was first exhibited at Luhring Augustine in 2007 during Counterfacture, a group show of British artists that also included William Daniels, Rupert Norfolk, and Alex Pollard. David Musgrave is represented by greengrassi, London, Marc Foxx, Los Angeles, and Luhring Augustine, New York.
www.luhringaugustine.com