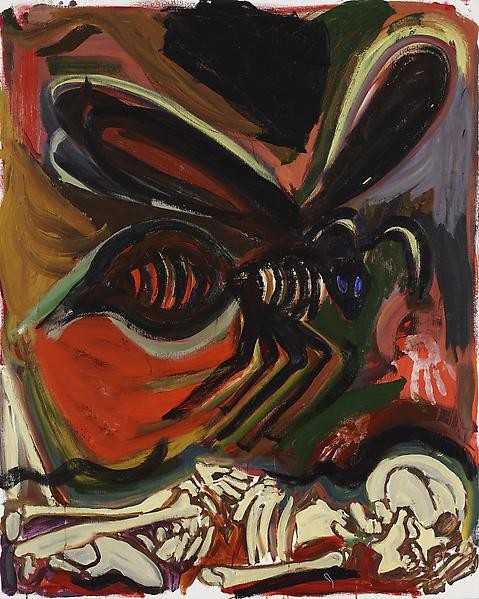 Luhring Augustine is pleased to announce an exhibition of new work by Josh Smith. This will mark his third solo show with the gallery and will present a selection of paintings and collages. Smith is perhaps best known for paintings featuring his name writ large, the letters of which fluctuate between signifiers of the name and abstracted forms. In recent years, he has experimented with more figurative subjects such as fish and leaves, and his newest works include depictions of skeletons and insects. Each motif is chosen not as a subject to be precisely rendered, but rather as a point of departure in his ongoing exploration of abstraction. In forcing the painted subject to be somewhat arbitrary, Smith strives to take the act of painting beyond aesthetics.

In his collages, common found materials such as newspapers are combined with reproductions of Smith’s own works as well as silk-screen and painting. Some recent collages have consisted entirely of printed images of his existing works; by adjusting scale and modulating the colors of his printer, he can achieve innumerable variations of the original images. Smith likens each panel or canvas to a page in a book in that each work informs the next as well as implies a predecessor. Collectively, they represent an exhaustive exploration of technical and compositional possibilities.

Born in 1976, Josh Smith is from Knoxville, Tennessee and currently lives and works in New York. He has had numerous solo exhibitions in the United States and abroad, most notably Who Am I at De Hallen Haarlem in 2009 and Hidden Darts at Museum Moderner Kunst in Vienna in 2008. He has also participated in several important group exhibitions, including Uncertain States of America at the Serpentine Gallery in London and Astrup Fearnley Museet in Oslo, USA Today at Saatchi Gallery, the 2007 Lyon Biennial curated by Hans Ulrich Obrist, Book/Shelf at the Museum of Modern Art in New York, and The Generational: Younger Than Jesus at the New Museum in New York.
www.luhringaugustine.com