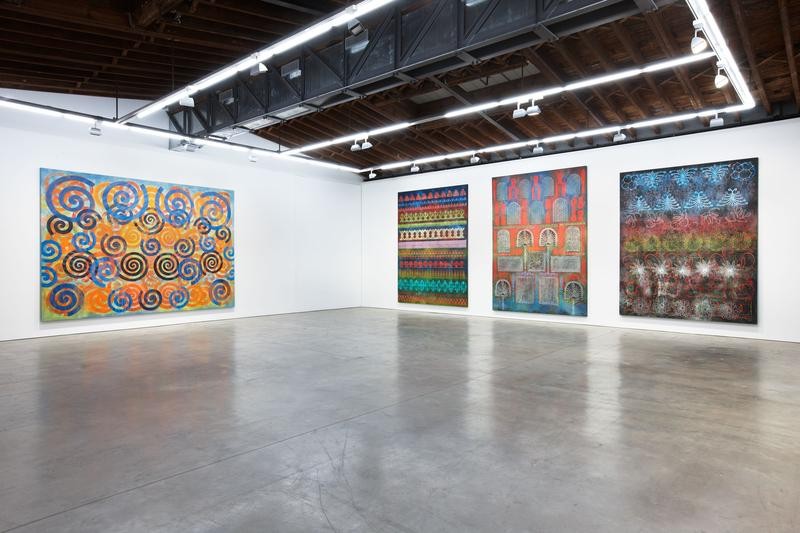 Luhring Augustine is pleased to announce an exhibition of recent work by Philip Taaffe. The exhibition, the artist’s second solo show with the gallery, continues to reveal Taaffe as an alchemist of form, process, and imagery, while remaining a thoroughly modern painter of complex and thought-provoking paintings.

Taaffe’s work is known for its masterful synthesis of processes and techniques; silkscreens, stencils, collage, marbling, staining, and many other modes of picture-making are all interwoven by Taaffe into richly complex and highly meditative canvases. Similarly, his employment of an encyclopedic range of imagery results in works that, while resolved, are impossible for the viewer to pin down and decode. Taaffe strives for an optical vibrancy and visual energy that integrate the decorative with the narrative, the natural with the man-made, the ancient with the modern – entwining cultural lineages and histories to create something authentically new from these interwoven sources.

The upcoming exhibition at Luhring Augustine Bushwick is comprised of a select number of new paintings on a large scale.

Philip Taaffe was born in Elizabeth, New Jersey in 1955 and studied at the Cooper Union under Hans Haacke and Dore Ashton. His first solo exhibition was held in New York in 1982. He has traveled widely in the Middle East, India, South America, and Morocco. He has been included in numerous important museum exhibitions, including the Carnegie International, two Sydney Biennials, and three Whitney Biennials. His work has been the subject of several museum surveys, including IVAM Centre del Carme, Valencia (2000), the Galleria Civica, Trento (2001), the Kunstmuseum Wolfsburg (2008), and the Irish Museum of Modern Art, Dublin (2011). His work is in numerous public collections, including the Museum of Modern Art, New York; the Philadelphia Museum of Art; The Whitney Museum of American Art, New York; the Solomon R. Guggenheim Museum, New York; the San Francisco Museum of Art; the Kemper Museum of Art, Kansas City; and the Reina Sofia, Madrid. Taaffe presently resides and works in New York City.

In 2016, Rizzoli will publish a major monograph on Taaffe’s work.
www.luhringaugustine.com