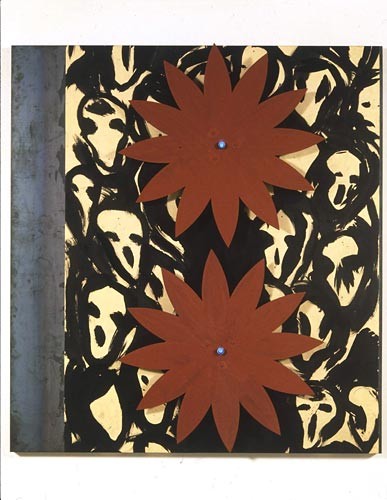 The term arte povera translates to poor art, but the movement as a whole encompassed far more than the use of humble materials. During the sixties and seventies, several young artists based in Italy strove to create work in aspirit of experimentation and openness. The loosely defined movement was coined Arte Povera by the prominent art critic and curator Germano Celant in 1967. In response to art historical tradition and the slick commercialism of the day, these artists turned instead to organic and industrial materials and employed unconventional methods of art-making. Recurrent themes include metamorphosis, alchemy, entropy and relational aesthetics resulting in works which emphasize the metaphysical, the symbolic and the poetic.

Alighiero e Boetti's work is often defined by systematic mark-making reflecting his interest in order and logic. For example, uno2due3tre4quattroecc is rendered on graph paper and the multiplication of black squares appears to follow a precise mathematical formula. The works of Gilberto Zorio include his trademark motifs of star and javelin, both of which are archetypal symbols suggestive of purity, energy and movement.

Pier Paolo Calzolari's Untitled installation involves a metallic grid frozen over time and is characteristic of Calzolari's use of machinery, neon and freezing elements to explore the notion of transformation. Merz also employed technology to present literary and political phrases in his signature neon works. His Tincta Purpura Tegit Fuco Roseo Conchyli features a verse by Catullus and the use of neon imbues the ancient text with a kind of modernmonumentality.

Luciano Fabro utilizes the traditional material of marble in his Volare, but creates a contrast in his juxtaposition of large and small elements. The balance of the composition lends the piece levity, thus transforming a weighty object into a symbol of flight. The practice of Giulio Paolini takes its cue from art history and Intervallo (Torsi) is an inspired variation on a classical plaster cast of a torso. Paolini transforms these traditionally staid objects into a dynamic and humorous installation.Known for his use of diverse materials, Jannis Kounellis blurs boundaries between art and life, nature and culture. His Untitled painting includes fire and his Untitled sculpture is comprised of copper and salt, and the use of natural elements attests to his ongoing interest in alchemy. Michelangelo Pistoletto also merges art and its environment through his iconic stainless steel paintings. By working with a reflective surface, the viewer becomes an integral part of the piece while the subject of the work is drawn into the activity of the gallery space, prompting one to contemplate questions of self, representation and reality.Each of the artists included here have exhibited widely in prestigious museums and festivals worldwide. As key figures associated with the Arte Povera movement, all were featured in the seminal exhibitions Zero to Infinity: Arte Povera 1962-1972 (co-organized 2001 in by the Walker Art Museum & Tate Modern) and Arte Povera: Art from Italy 1967-2002 (co-organized in 2002 by Castello di Rivoli and the Museum of Contemporary Art, Sydney).
www.luhringaugustine.com