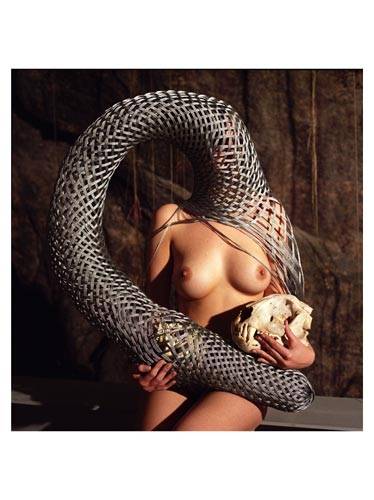 Luhring Augustine is pleased to present an exhibition of new work by Brazilian artist Tunga. Using poetry, sculpture, performance, installation and video, Tunga's work brings dreamlike forms to life. Inspired by his own mythology, the artist creates artworks that recall the ancient ritualistic practices of lost civilizations. Using nude performers to hypnotically interact with the objects, Tunga's work always relates to performance. In this way, his work follows in the tradition of Joseph Beuys' ceremonial environments and repeated use of symbolic materials.

Tunga's installations and sculptures utilize a repertoire of motifs, some of his own invention, which are recycled and interlaced throughout his body of work. The recurring iconography includes braided hair, nets, glass goblets, skulls, canes and the female form, which are imbued with a psychological resonance. Using raw and elemental materials such as iron, copper and lead, Tunga's fabrications evoke a primal force laden with symbols and codes. Recalling Surrealism, contrasting elements are placed together in a visceral manner: a gooey liquid drips down the side of cathedral-like bells; human and animal skulls are placed side by side in a suspended mesh net.

In this new body of work, Tunga continues to engage the viewer at the border between the real and the imaginary. Investigating ideas of rebirth, transformation and metamorphosis, the artist probes the delicate balance between life and death in a scientific and experimental way. The tension between order and chaos is communicated through the fusion of opposing elements, such as the repetition of oversized insect wings next to suspended skulls. This juxtaposition between the sacred and the profane is a recurring theme in Tunga's work.

Born in 1952, Tunga lives and works in Rio de Janeiro. He has exhibited internationally since the 1970s with solo shows at museums in New York, Paris, London, Chicago, Miami and Toronto. Tunga has participated in the Venice Bienale, two Documenta Xs and four Sao Paulo Biennials with major installations. In 2006 a monumental installation by Tunga entitled A la Lumiere des Deux Mondes occupied the area beneath the glass pyramid at the Louvre in Paris. A performance by Tunga will take place at the Museum of Fine Arts in Houston on March 9, 2007. A recently produced installation entitled Laminated Souls will be on view at PS1 in the late spring of 2007.