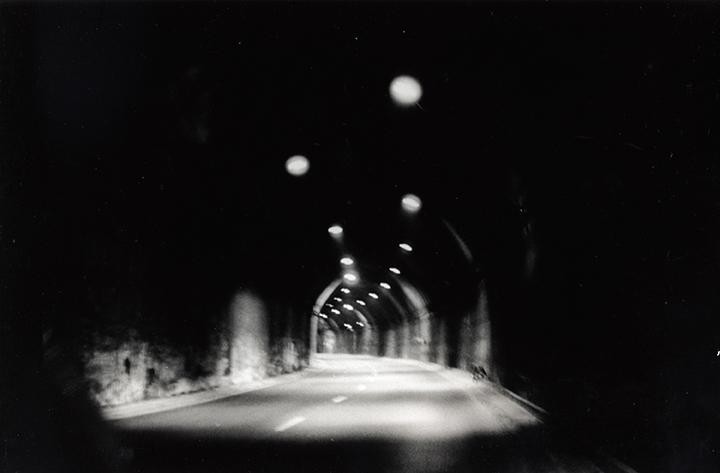 
Luhring Augustine is pleased to present Tunga’s seminal 1981 film installation, Ão, in the gallery’s Bushwick location. The work is comprised of a 16mm filmstrip that moves through a projector and around the exhibition space on a series of roller bearings. The projected image shows the interior of a curved segment of the Dois Irmãos Tunnel in Rio de Janeiro; it is looped to appear as though the camera moves along a continuous, ring-shaped path, as if traveling through a particle accelerator. The unending loop, or torus, is an important recurring motif throughout Tunga’s body of work and is duplicated in the structural form of the installation: the rollers that allow the filmstrip to traverse the space are arranged in a large circular configuration. The audio component of the piece, a looped excerpt from Night and Day sung by Frank Sinatra, emphasizes the installation’s endless nature, creating a sense of space and time as cyclical.

Tunga was born in Palmares in 1952 and is one of the leading Brazilian artists of his generation. His principal mediums – sculpture, installation, and performance – are customarily presented as a single integrated body of work that underscores a complex relationship between the individual pieces. His oeuvre's subversive psychological force includes constructivist and surrealist influences, which delineate his original and sensual territory. Tunga lives and works in Rio de Janeiro and has exhibited extensively internationally. His work is included in the permanent collections of several institutions, including the Museum of Modern Art, New York; the Museum of Contemporary Art, Los Angeles; the Museo Nacional Centro de Arte Reina Sofia, Madrid; and the Moderna Museet, Stockholm. In September 2012 a major permanent pavilion dedicated to Tunga’s work opened at the Instituto de Arte Contemporânea Inhotim in Brumadinho, Brazil.
www.luhringaugustine.com