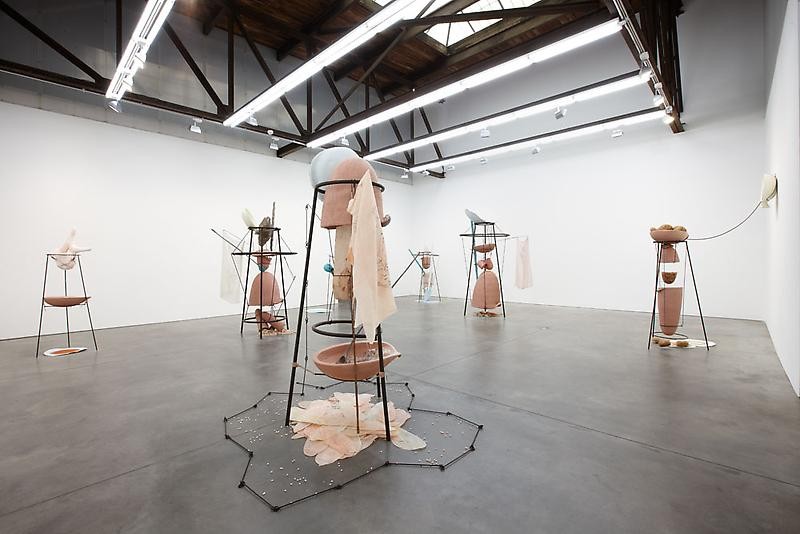 Luhring Augustine is pleased to announce an exhibition of new work by Tunga. This marks the artist’s fifth solo exhibition with the gallery and includes sculptures and drawings conceived over the past few years. For four decades Tunga has created a complex personal mythology through his integrated and evocative body of work, which includes sculpture, installation, performance, film, drawing, and writing. His practice is a synthesis of multifarious interests in poetry, psychology, physics, alchemy, and metaphysics, and is expressed with a distinctive sensual and poetic sensibility.

Following in the tradition of Joseph Beuys’s ceremonial environments, Tunga relies on a repeated use of symbolic materials such as crystals, sponges, rubber, wood, bronze, glass vessels, and ceramics. The tripod is a recurring structural component in his new sculptures, which incorporate such variety of media and resemble monumental totemic objects resulting from an enigmatic ritual. Tunga’s new ink drawings made on diaphanous handmade paper address similar concerns as those developed in his sculptures; each features a continuous line, linking disparate bodily forms that overlap to create larger anthropomorphic images, which emerge and recede. For Tunga, the drawings bring to mind “formulas, recipes, concoctions,” and “evoke scenes from pre-scientific iconography where an image can be translated into an element of transmutation.” As art historian Michael Asbury has noted, at the heart of Tunga’s practice lies a “desire to uncover the mystical undercurrents of modernity.”

Born in 1952, Tunga lives and works in Rio de Janeiro and is widely considered one of the leading Brazilian artists of his generation. He has had numerous solo exhibitions at museums internationally, and has presented major installations at the Venice Biennale, Documenta X, and four iterations of the São Paulo Biennial, in which he will be featured for a fifth time later this year. His work is included in the permanent collections of several institutions, including the Museum of Modern Art, New York; the Museum of Fine Arts, Houston; the Museum of Contemporary Art, Los Angeles; the Museo Nacional Centro de Arte Reina Sofia, Madrid; and the Moderna Museet, Stockholm. In September 2012 a second major permanent pavilion dedicated to Tunga opened at the Instituto de Arte Contemporânea Inhotim in Brumadinho, Brazil. Most recently, Tunga was included in Brasiliana: Installations from 1960 to the Present at the Schirn Kunsthalle in Frankfurt am Main, and in Imagine Brazil, which originated at the Astrup Fearnley Museet in Oslo and will be traveling to several institutions throughout Europe, Russia, and Brazil.
www.luhringaugustine.com