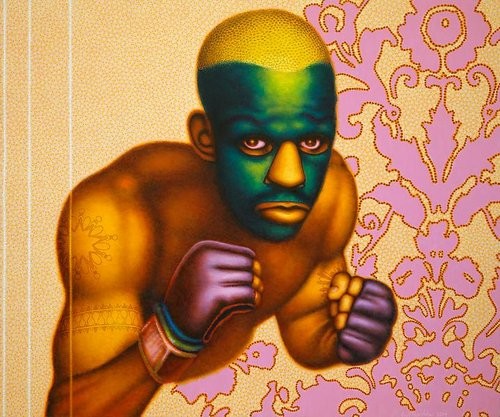 Founded in 1985 by Lawrence Luhring and Roland Augustine, the gallery's history has been characterized by its commitment to a singular roster of international artists and a rigorous contemporary program punctuated by the inclusion of historical exhibitions. From its inception in midtown Manhattan through its ten years in Soho to its current incarnation on 24th Street in Chelsea, as well as other project spaces in New York and Los Angeles, Luhring Augustine has a history resonant with many "firsts"; notably, the debuts of important works of art by Larry Clark, Pipilotti Rist, and Christopher Wool, as well as the first U.S. solo exhibitions of Janet Cardiff and George Bures Miller, Günther Förg, Johannes Kahrs, Albert Oehlen, Yasumasa Morimura, Reinhard Mucha, and Rachel Whiteread. Other significant exhibitions with artists outside the gallery's representation include Remembering Marcel in 1987; Gerhard Richter in 1995; Donald Judd, Stacks in 2000; Red Sky: Arte Povera in 2008 with works by Alighiero e Boetti, Luciano Fabro, Jannis Kounellis, Giulio Paolini, and Michelangelo Pistoletto among others; and The Irreverent Object in 2009 which included Joseph Beuys, Louise Bourgeois, Marcel Broodthaers, Lucio Fontana, Piero Manzoni, Reinhard Mucha, and Franz West.

Among the works included in TWENTY FIVE are Janine Antoni's Lick and Lather, 1993, a series of two self-portrait busts made of chocolate and soap; Joel Sternfeld's iconic McLean, Virginia, December, 1978, from his American Prospects series; Rachel Whiteread's Untitled (Black Bed), 1991; Cady Noland's Crate of Beer, 1989; Christopher Wool's Minor Mishap II, 2001; and the cover of Larry Clark's 1983 book Teenage Lust. Many of the works in the exhibition are emblematic of milestones in the artists' careers. For example, a meticulously-staged large-scale photograph by Gregory Crewdson referencing the Shakespearean character Ophelia, which later became the cover of his book Twilight in 2003; Yasumasa Morimura's Angels Descending a Staircase, 1991, which illustrates the artist's pioneering use of photographic manipulation; and a 1992 self-portrait by Martin Kippenberger, with whom the gallery maintained a long relationship and who was featured in solo shows at Luhring Augustine in New York and Los Angeles.

Throughout the course of its history, Luhring Augustine has published numerous catalogues to accompany its exhibitions and serve as historic documentation. In conjunction with TWENTY FIVE, the artist Josh Smith has created an artist book comprised of images of each of the gallery's exhibition announcement cards since 1985, installation photographs, and archival documents. A history of the gallery written by art critic and curator Allan Schwartzman will preface the book.
www.luhringaugustine.com