Untitled (Painting) and Tulsa, 1968: A film by Larry Clark 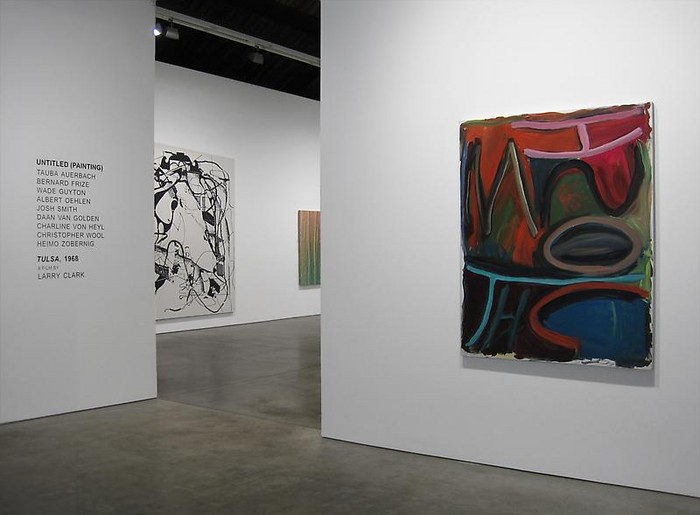 These artists and their works have in common an approach to painting that is conceptual and process driven. They are contemporaries who have contributed to the evolution of the medium of painting by using traditional and nontraditional methods of paint application to explore the many variations of the abstract mark. This exhibition is a snapshot of this moment in art making and offers an opportunity to contemplate their work together.

In the third gallery Tulsa (64 min, silent), a film by Larry Clark which was recently found by the artist, will be exhibited for the first time in the US. Made in Tulsa in 1968, Billy Mann and others from Clark’s seminal 1971 book, Tulsa, come to life in this 16mm black and white film footage. Much like the iconic photographs, the footage offers a glimpse into the group’s daily drug rituals. Clark shot the film on a rented Bolex camera and the film demonstrates his early interest in narrative filmmaking and directing.

The film was first exhibited in a retrospective exhibition of Clark’s work Larry Clark Kiss the past hello at the Musée d’Art moderne de la Ville de Paris / ARC (October 2010 - 2 January 2011). On the occasion of the retrospective, an artist's book of work from 1962 to 2010 has been published by Luhring Augustine with Simon Lee Gallery, London. The publication is comprised of two soft cover books and poster in box with texts in both French and English (192 pages, 131 full color illustrations, $60).
www.luhringaugustine.com