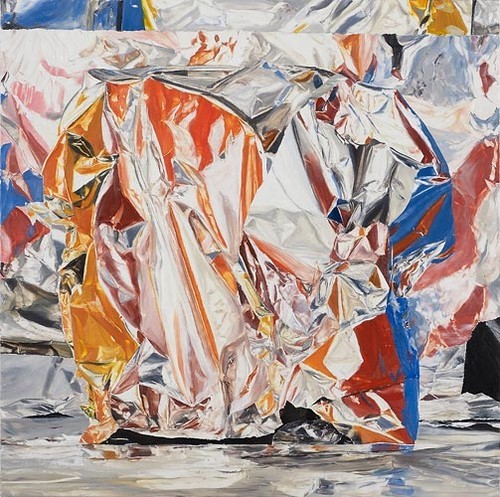 Luhring Augustine is pleased to present Paintings by William Daniels. This exhibition of new oil paintings on board marks Daniels' first solo exhibition in New York and with the gallery.

Daniels is best known for his meticulous trompe l'oeil works depicting famous art historical paintings. He creates maquettes of the source paintings out of simple materials such as paper, cardboard or aluminum foil which are then photographed to serve as models for painstaking detailed facsimiles in oil paint. Recognizable, but pared down and muted in tone, the small-scale works are at once a still-life and a rendering of the original artwork, and call into question issues of representation, documentation and authenticity.

With his new series of paintings, Daniels eschews source imagery and creates dioramas out of reflective foil which are entirely abstract. Each model is lit differently to achieve variations in palette and the resulting paintings are complex compositions of brilliant color and pure form. The surface of the silver foil is juxtaposed with both cast light and reflected light to create a multiplicity of beautiful, shimmering surfaces.

Just as Daniels' referencing of known works presents a kind of homage to artists such as Mantegna, Cezanne and Morandi, these new works instill a reverence for the abstract objects depicted here. In spite of the small scale of the paintings themselves, these sculptures have a monumental quality to them - akin to primitive totems or enormous rock formations. Daniels places the sculptural object in the central foreground to assert its significance, and every plane, fold and crease is so precisely rendered as to suggest a certain precious quality to the models themselves. Yet in reality, the represented objects are merely fragile constructions of no economic or cultural value. Daniels' embraces such contradictions - the real and the reflected, the modest and the monumental, the meticulous and the expressive - and in doing so, encourages the viewer to question his own notions of originality and value.