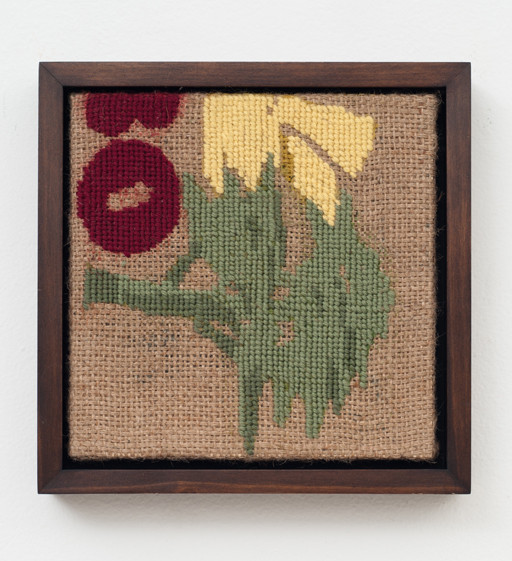 The artist will exhibit embroideries made in collaboration with Luisa Strina and a series of new sculptures. The exhibition takes place in the new space of the gallery: Rua Padre João Manuel, 755

In his work, Alexandre da Cunha appropriates objects, material and citations from traditionally distinct registers in order to transform them through a process of collage of different elements. This operation usually begins with ordinary objects found in any day-to-day existence, which are appropriated, recombined and finally inserted into a new hierarchy of value. By bringing these objects into the universe of art, the artist removes their original function, whilst at the same time raising questions related to value, circulation, intentionality, among others. In many cases, he also alludes to specific styles or movements recognised by official Western Art History, thus creating – with (self)-critical humour - a hierarchical short-circuit.

In the embroideries presented at the Fair trade exhibition, we find this very collage procedure, which includes elements from the show title right to the complex network of references which these works activate. Fair trade is a type of certification that has been increasingly used in so-called developed countries to designate the products acquired from emerging countries at sustainable prices, in which the producer receives adequate remuneration, with the aim of correcting the exploitation promoted by conventional international trade. In this case, the artist casts his own dealer, Luisa Strina, in the role of producer: it was she who, one by one, stitched the embroideries shown in this exhibition over a period of two years, by hand. However, this is not merely an attempt to reverse a certain power relationship or to underscore a supposed relationship of exploitation between dealer and artist, – as this would be a very simplistic way of addressing the intricate network of relationships that permeates the contemporary art circuit today - but a much more complex operation which promotes an oscillation between the many roles she assumes: artisan, artist, dealer, artist’s assistant.

An activity such as embroidery is normally associated with women who engage in housekeeping tasks and do not have a professional occupation; an image which greatly contrasts with the figure of an entrepreneurial dealer and independent woman. These objects therefore promote the encounter of two profoundly distinct worlds.

There is also another aspect at stake in this series of works, which is also related to a process of appropriating a historical art style, taking place precisely in the incorporation of a feminine skill, giving it another dimension in relation to previous works. This something is present in Mira Schendel’s Droguinhas, in Eva Hesse’s malleable pieces, in Louise Bourgeois’ fabric works and even in Lina Bo Bardi with her appropriation of popular knowledge from the Brazilian Northeastern handicraft, configuring a kind of non-linear genealogy of a certain appreciation on the part of these female artists, of the smallness (not in a derogatory sense) and impermanence of ordinary things as well as their incorporation of techniques conveyed mainly within a feminine universe.

The logic of embroidery is taken to a larger scale, thus becoming tapestry, and determining the constructive procedure of the concrete sculptures that are shown in the exhibition. The construction made up of industrial concrete bricks employs the artisanal method in which they are laid out one by one over the gallery floor. These pieces create a rigid structure, a kind of canvas or grid which is woven by the contrasting softness of other materials such as foam.

In Fair trade, Alexandre da Cunha once again uses the mundane and the popular, this time in the form of female craftsmanship and its developments in art history, bringing these into the universe of contemporary art in a kind of tribute combined with the critical humour of someone who recognises how the revolutionary potential of this production has already been exhaustively co-opted by the art circuit.

In addition to embroideries, the exhibition will include new works made of cement, leather and foam.