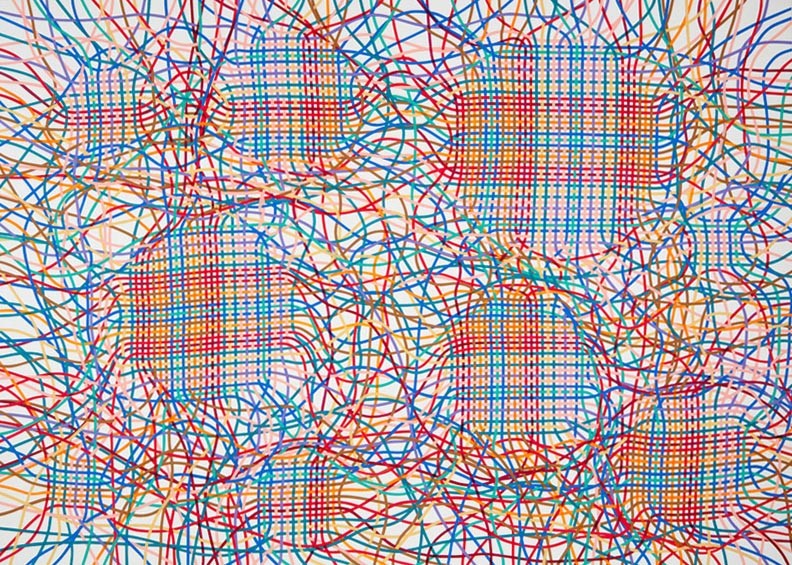 There are imbeciles who call my work abstract;
that which they call abstract is the most realistic,
because what is real is not the exterior form but
the idea, the essence of things.

Galeria Luisa Strina: This is your 9th show at Galeria Luisa Strina, which has been hosting exhibitions of your work since 1990. For example, there was the show "Exposição de Quadros" [Exhibition of Paintings] (1997), where you repainted works by artists such as Poussin and Turner, and "Mundo Plano" [Flat World] (2003), with a series of abstract canvases that can be approximated with Volpi, Oiticica, Clark, Burle Marx, Fontana, Pollock and Mondrian. How do you relate this path with the work you are presenting currently?

Caetano de Almeida: When I presented the exhibition "Mundo Plano" (2003) – which is related with my trip to India and France – I discovered an entire repertoire of fabric patterns and the process of their reproduction. Prints arose there, sometimes associated with the popular realm, and can even be crossed with a range of images from other orders, or even images that move into a more abstract field. I was not intentionally headed toward abstraction, but the very concept of the work wound up arriving at this refinement. At "Exposição de Quadros" (1997), it was possible to see the stereotyped work of art, for example a painting with a layer of thick paint, which protected an image and distanced it from the viewer. For this exhibition in 2012, I substantially reduced my palette, resorting to the pots of paint offered on the market, following the orientation of color scale given by the manufacturer. Therefore with this series of colors I try to organize a certain chaos. It provides a contrast between organization and disorganization, which approximates tension between the synchronous and the anachronistic.

GLS: The canvas "803" (2011) presented at the exhibition makes use of a geometric pattern similar to decorative fabrics, printed industrially. With this appropriation are you trying to intercross the refined plane with the popular, through painting?

CA: From the moment I appropriate images, I wind up facing many contrasts, including the one between the refined and the popular. I don’t think that it is this specific contrast that interests me. I am interested in a contrast with a wider incidence. With time I gradually perceived that it exists more in the essence of the work than at its fringe. These popular images are always linked to a pattern, which could be a print, or even an encyclopedia. When I make these images, of more abstract paintings, I am only using a pattern, whether in terms of shape or color.

GLS: We are experiencing a moment in which the reproduction of the image is carried out in an increasingly accelerated and instantaneous way, such as video, proliferating through YouTube or Facebook. In your work we find the opposite. Could you talk a little about your work process, and how you arrive at these images?

CA: The painting "Tarde de São João" [Afternoon of São João] (2012) took nearly two years to complete. The performative action of the piece’s making is also important for me and this translates into these paintings. The tools used to apply the paint, the choice of colors, the lighting of that particular day – all of this influences the work. I try to act in the most mechanical way, for example; the lines of these paintings were all constructed based on a procedure of continuous repetition, covering determined areas with masking tape.

GLS: It is a controlled procedure, but it presents a dialectic, since the final result is uncontrolled.

CA: I think you hit the nail on the head. For the making of "Aquarela Lírica" [Lyrical Watercolor] (2012), which involved placing a sheet of paper on the floor of the studio, and then measuring a specific distance down to it every day from the second floor of the house, to control the size of the spot (since the drops do not hit a random place), and the intensity of the color when it falls on the sheet of paper. When I say “calculate,” I’m referring to an imaginary notion of this measure which is only recognizable with the practice that takes place in the studio. This is all part of an assembly line, where I move from one work to another, giving each its proper space and time during its making.

GLS: There is therefore a simultaneity that is present in the construction and in the process of making this group of paintings.

CA: The time of painting is a different point, it’s clear that photography has a different technical procedure – everything is quicker. I begin to establish this idea of an assembly line when I jump from painting to watercolor, and then to painting, to watercolor, and so forth, which affirms an exercise of simultaneity. The entire work process is characterized by this instability, between chaos and organization.

GLS: How do you see abstraction in your work and in the contemporary visual practices?

CA: I don’t like any sort of classification in relation to any artwork. I am not doing anything abstract. What I find most interesting in contemporary art is this plurality of media, where the artists work on various questions.

Caetano de Almeida was born in 1964, in Campinas, Brazil. He lives and works in São Paulo. His solo shows in museums have most notably included Borda at the Pinacoteca do Estado de São Paulo, Brazil, which traveled to the Museu de Arte Moderna, Rio de Janeiro, in 2007. His solo shows have also included the eight exhibitions he has presented at Galeria Luisa Strina, São Paulo; and others at Eleven Rivington Gallery, New York, USA, (2011 and 2009); Distrito Cu4tro, Madrid, Spain (2007); and Galeria Anna Niemeyer, Rio de Janeiro (2007). His work is part of collections such as that of the Museu de Arte Moderna de Sao Paulo; the Museu de Arte Contemporânea USP, São Paulo; Inhotim – Instituto de Arte Contemporânea, Brumadinho, Minas Gerais, Brazil; the Museu de Arte Moderna de Rio de Janeiro; and the Museum of Fine Arts, Boston.
At this moment, Caetano de Almeida is preparing another solo show in New York, at Eleven Rivington Gallery, which will open in September of this year. In 2013 he will participate in a group exhibition at the North Carolina Museum of Art.
www.galerialuisastrina.com.br