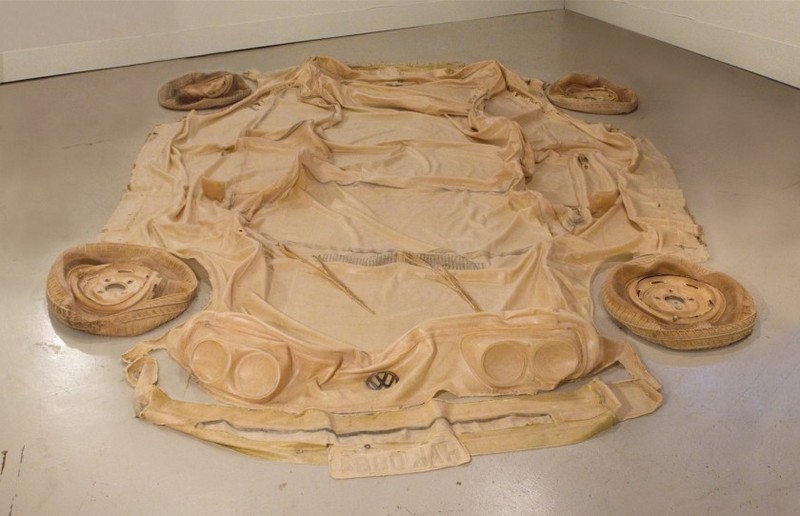 Galeria Luisa Strina is pleased to present Transplanted (VW Brasilia), by Brazil born and US resident Clarissa Tossin. The artist works across video, sculpture, performance, and installation to reflect on the ways the built environment shapes us as subjects. Having grown up in Brasília, Brazil’s modern planned capital, made her aware of the global circulation of modernity images as well as their effects on the national and international psychologies. More recently, she has engaged with spaces and intertwining aesthetics where transnational histories of Brazil and the United States remain imprinted.
Transplanted (VW Brasilia), is a natural latex cast of a Volkswagen Brasilia car. The first model entirely designed and manufactured by Volkswagen in Brazil, and named after the city which urban design emphasizes the usage of the car. A popular car, the Brasilia soon became a national design icon. The car used for the latex cast in Transplanted (VW Brasilia), is the central piece in the installation Brasília, Cars, Pools and Other Modernities, which will be on view at the Hammer Museum’s Los Angeles Biennial, Made in L.A., from June 15 to September 7, 2014.
The skin-like imprint is evocative of mass production processes since casting mimics the idea of endless copies. Transplanted (VW Brasilia), approximates industry and its abstracted processes to the individual body by anthropomorphizing a car. Moreover, the sculpture’s skin-like formal quality provokes considerations about the pursuit of cars as a third skin in consumer society.
The sculpture uses latex as an art material while also considering its cultural and historical background as an industry commodity within the context of Brazil. The titled, Transplanted (VW Brasilia), was inspired by a passage in Brazil’s latex history: Henry Wickham’s successful quest to smuggle seeds from the rubber tree, Hevea brasiliensis, from the area of Santarém, in Brazil to Kew Gardens in London from where seedlings were dispatched to Malaysia thus dooming the Amazonian rubber boom. The word “transplanted” also further emphasizes the sculptural transformation of a hard car-body into a soft, malleable, cast/imprint of it.