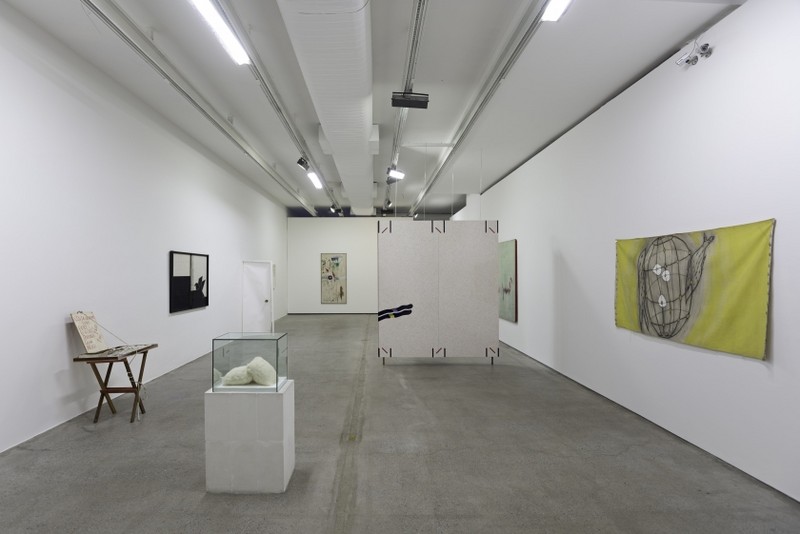 To conclude a year of 40th Anniversary celebrations, Galeria Luisa Strina will present Eu represento os artistas, Revisited, a group show that will trace the gallery’s rich and unique history as the first contemporary art gallery in São Paulo and a cultural catalyst in Brazil for the past 40 years. The year’s program has illustrated the commitment the gallery represents and has nurtured since opening its doors. 2014 began with the group exhibition Secret Codes, followed by solo exhibitions by Renata Lucas, Fernanda Gomes, Muntadas and Cildo Meireles, the first presentation with the gallery by renowned Anna Maria Maiolino, as well as projects by Bernardo Ortiz, Clarissa Tossin, Lawrence Weiner and Magdalena Jitrik.
Eu represento os artistas, Revisited reveals a personal and intimate look at the gallery’s history over the past 40 years. It is not a retrospective, rather a trajectory of the turning points in this history, featuring a diverse group of emerging, mid-career, and established artists engaging in a conceptually-driven ample array of mediums. Since the beginning, the gallery has been renowned for its unconventional approach, creating and empowering multiple communities. The show will examine the many different paths the artists associated with the gallery have taken as a result. Significant old and new works have been chosen to reflect the gallery’s personality and to explore where the lines of time, influence and artistic inspiration could be drawn or where they might ultimately lead.
Key works in the exhibition are a portrait of Luisa Strina by Wesley Duke Lee and a wooden panel by Luiz Paulo Baravelli. These works illustrate the origins of the gallery, which started in Baravelli’s studio in 1974 when a group of artists chose an individual to represent them. This was the beginning of the gallery, a way of opening up to the world and expressing an ecclecticism of taste that has enabled artists to express their own views and, in tough times, maintain a voice.
Each generation of artists has been included in the exhibition. Leonilson, Leda Catunda, Caetano de Almeida and Edgard de Souza illustrates an important transition for the gallery as they all attended FAAP (Fundação Armando Alvares Penteado), the art school where Nelson Leirner, Regina Silveira and Julio Plaza were teachers in the 1980s. This reflects a significant time in Brazil when the beginning of a more endorsed education culminated with the end of the military regime. It was an interesting time in terms of discussion around art, as interest in the non- materialization of art and the use of Ready-Mades contradiced those who supported a comeback of painting. It was these contradictions that allowed for the diversification of contemporary art in Brazil.
Antonio Dias, who was represented by the gallery for almost 30 years, will present a wallpaper installation entitled Quarto de Carne com Anima (Flesh and Soul Room) made for the original gallery space in 1996. Nelson Leirner, a central figure in Brazilian contemporary art and one of the first artists to exhibit in the gallery, will present a work from the series Uma Linha Dura...Não Dura, which was part of an exhibition/performance in 1978. This is a fundamental work in the exhibition, demonstrating the gallery’s commitment to formal mediums, such as drawing and silkscreen, which conclude with an intervention by the artist.
Cildo Meireles will present one of his first works ever shown at the gallery, Obscura Luz (Obscure Light), 1982, a sculpture which explores the idea of perception from a political viewpoint. Meireles is the artist who has been represented by the gallery the longest, from 1983 to the present, making his inclusion in the exhibition essential.
Juan Araujo, a young Venezuelan artist who joined the gallery seven years ago, has created a special series of paintings based on photographs and documentation of the gallery from 1974. Some of these works illustrate the gallery’s first ever exhibition on 17th December 1974. These works perfectly exemplify how the present is stimulated by the past with a respectful, inspired and compelling approach. Araujo has also produced a new version of Leirner’s poster from the series Uma Linha Dura...Não Dura, reinterpreting the work and extending the performative element.
As part of the 40th Anniversary celebration, the exhibition will also present an array of historical documents, archives and memorabilia of the gallery. This part of the exhibition will be organized in collaboration with Luisa Strina and includes artists such as Milton Machado, Waltercio Caldas, Jorge Guinle amongst others.
All artists represented in Eu represento os artistas, Revisited are or were at one time part of the program of the gallery. The full list of artists presented in the main exhibition is: Caetano de Almeida, Juan Araujo, Tonico Lemos Auad, Luiz Paulo Baravelli, Leda Catunda, Alexandre da Cunha, Antonio Dias, Wesley Duke Lee, Marcius Galan, Fernanda Gomes, Nelson Leirner, Leonilson, Dora Longo Bahia, Mateo López, Jorge Macchi, Marepe, Marcellvs L., Cildo Meireles, Antoni Muntadas, Regina Silveira, Mira Schendel, Alan Shields, Edgard de Souza, Tunga.
www.galerialuisastrina.com.br