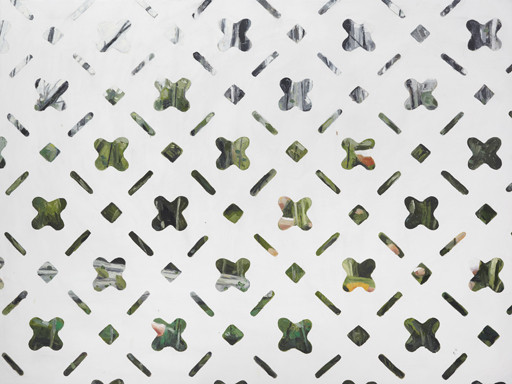 Isla [Island], 200 x 200 cm
In light of its multidisciplinary and multimedia character, it is not surprising that Jorge Macchi’s (b. 1963, Buenos Aires) artistic path is now taking a turn into painting – a sort of missing puzzle piece. This research goes back to the beginning of his practice as an artist in the late 1980s when he dedicated himself exclusively to painting, and to his interest in pictorial representation, as continuously evinced in a series of watercolors realized since the mid 1990s. Drawing, watercolor, text, installation, sculpture, object, music, video, photography, collage, light works, cutout, artist books, printmaking, architecture, landscape, and once again, painting – these are some of the languages that the artist has used throughout his career. With each of them, the artist has tended to explore something specific, avoiding repetition and the artificial adaptation of themes to the new supports.
In his watercolors, Macchi generally situates the theme at the center of the composition, with a clear contrast between figure and background. This device seems to have been transposed into oil painting in Island, featuring the image of a jigsaw puzzle piece, where paint splatters have been maintained to remind us of the material specificity of this medium. The signs of the painter’s work – the mixing of paints, the movement of the brush, the imperfect hand delimiting the outlines of the figure – are also masterfully maintained in this puzzle. It is a painting that seems to contain both the seed and the synthesis of this new painting production (all the works in oil on canvas in this show; American dream and Falling week, 2011; other works, 2010).

Confesión [Confession], 150 x 200 cm
The language game that comprehends and presents painting as a means of simultaneously making visible and concealing appears in a violent and exemplary way in this canvas. Onto a landscape painted with a postimpressionist palette, Macchi overlays a vast white area representing a sheet with small openings. However, the paint does not cover the background – the raw canvas does. At a minimum, this makes us alter our focal point for visualizing the painting and inverts the relation between figure and background.

Sticker, 180 x 200 cm
These paintings share some characteristics in common: they are large-format works, with an eloquent presence of pictorial material, with greater or lesser gestuality, and generally deal with relations between figure and background. This text was specifically commissioned by the artist for the exhibition, and springs from the experience of seeing all of the recently finished paintings gathered in his studio (May, 2011). This publication was created in dialogue with the artist, in such a way that each painting is represented by a previously unpublished text written by the author, composed in a typographic box with the proportions of the respective painting. Among these, Sticker is the most enigmatic, with a character that is hard to interpret. The figures of Mickey and Minnie Mouse appear only as an outline, as if the sticker that contained it was pulled off, and they exist only as an absence, and, once again, an index. We do not know if the painting’s choices – the color, the thickness of the remaining line, and the irregularities of the contour – in fact represent something existing in the world or if the artist arbitrarily determined them. Ultimately, this work speaks of the limits of representation.

Catedral [Cathedral] 2011, 200 x 180 cm
Macchi’s intricately constructed paintings include one that involves weight as a characteristic. This painting seems to speak to us of the weight of seeing, reading and representing. In a dialogue between reading and vision, readers and observers are blinded by the retinal experience itself. The chart used in eye examinations disappears from sight as each successive line of meaningless writing gets smaller and fainter. The quality of depiction suggests a compromise between a brief glance and a prolonged gaze. In this work the artist used an elaborate technique of painting, in which successive, overlaid layers of paint result in a space with depth and a tense surface, showing signs of craquelure, as though it were aged. The black of the figure (paint, letters) blends with the white of the background (paper, paint) and vice versa. A metalinguistic game is taking place as the layers are added to the canvas, resulting in a disappearance. This painting by Macchi speaks to us of an absent presence, a value-subtracted where more material results in less image. We are confronted with the limits of our vision, insofar as we see transparence and glazing, whose result is obliteration. We are reminded of Jorge Luís Borges (“El mundo del ciego no es la noche que la gente supone,” that is, “The blind man’s world is not the night that people imagine”), who said that black was precisely the color he missed in his blindness.1 In Macchi’s intersemiotic framework, it is neither in the writing nor in the painting where the meaning is most poignantly conveyed. Its title brings architecture into play, although the sense of the tower’s verticality is deconstructed by the inverted position of the figure on the canvas (for the artist, it represents the cathedral’s ceiling disappearing, in the direction of the altar). As the figure’s height increases, its presence decreases. And seems to disappear, in the clouds.
1. Conference at the Teatro Coliseo, Buenos Aires, August 3, 1977.

Falling week, 300 x 60 cm
Like the map, the clock is a recurring motif in Macchi’s oeuvre, revealing the artist’s interest in examining, analyzing, dissecting and subverting systems for the representation of data. The clock appears above all in watercolors, videos and installations, which refer to a deconstructed and refunctionalized time. Instead of a clock, in Falling week we see the representation of a one-week fragment of a calendar, with the day-off customarily represented in red (for an analogy with the use of red on the clock, see the watercolor Round midnight, 2008). We are reminded of a series of artists who used numbers in their works – from Jasper Johns to On Kawara, and including Cildo Meireles. Here, however, there is a dragging of the paint that confers a specific action to the numerals (from 7 to 13). As the week advances, the calendar count ascends in the painting, the days appear closer together and the paint gets more blurred, ending at Sunday painted in red, as though it were no longer a calendar but rather a thermometer recording a high temperature.

American dream, 170 x 300 cm
Like the clock, the map is a recurring motif in Macchi’s work, revealing the artist’s interest in examining, analyzing, dissecting and subverting systems for representing data. The map appears mainly in cutouts, collages and installations that refer to the world map, to cities and to geographic features (for example: Paisagem marinha, 2006; La ciudad luz, 2006, La ciudad perfecta, 2003; and 32 morceaux d’eau, 1994). American dream brings this interest to a pictorial representation, based on an appropriated image. The map that we see in this painting of architectural dimensions is like those that appear on video screens aboard airplanes – and this gives rise to the first feeling of strangeness, a violent alteration of scale that works on our normal perception of this image. The original image’s resources of digital imagery are reinterpreted in keeping with this change in scale and with the technique of painting, and the pixels give way to vigorous and masterful brushstrokes made with calculated haste. The use of pictorial resources to represent natural phenomena has appeared in previous works by Macchi (see the watercolor Dilúvio 2 [Deluge 2], 2010), but here the layer of dark paint that covers the American continent with nighttime bears other political, poetic and existential meanings. The American dream can refer either to the dream of each individual who is sleeping at that moment, or to the political dream of transformation. The marked contrast of lighting between the two areas in the painting can refer to a geopolitical duality, a sort of yin yang.
For these paintings by Macchi, we can evoke the gist of Montaigne’s first essay: “By diverse ways we arrive at the same end.”

Tape, 100 X 200 cm
With the exception of Confesión, all of Macchi’s paintings stem from images appropriated from the graphic universe, which appear reprocessed in the pictorial treatment they undergo. Tape resorts to the same procedure, using the text-image printed on adhesive tape that normally accompanies fragile cargoes, such as paintings, when they are shipped from place to place. Instead of their direct presentation (after all, it is a tape and can be configured in various ways), the artists opts for the iconic fragmentation of the word “fragile,” through the truncated framing and the overlaying of layers of tape, actually, paint. This graphic deconstruction is at the same time constructivist and structural, paraphrasing what Augusto de Campos wrote about e. e. cummings.1 It reconstitutes our experience at the sensible and sensorial levels, multiplying our possibilities for the reading of the word, and dialogues with some of painting’s morphological principles, such as the rectangle and the superposition of layers.
1. Augusto de Campos, “e. e. cummings, Sempre jovem,” in E. E. Cummings, Poem(a)s. Rio de Janeiro, Francisco Alves: 1999.