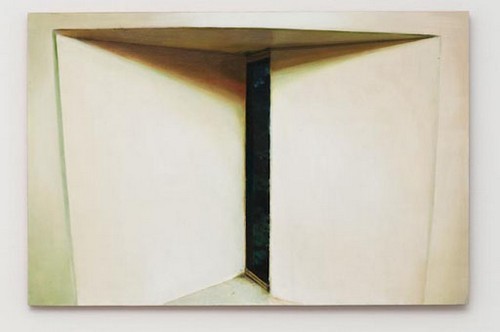 Luisa Strina Gallery presents, from May 26th to July 24th 2009, the Project “Re-Untitled” by Venezuelan artist Juan Araujo at the second floor of the gallery. The project brings together paintings based on Casa das Canoas (House of Canoes) by the architect Oscar Niemeyer (Rio de Janeiro, 1953) which were specifically selected for the exhibition space at Galeria Luisa Strina.

The project, consisting of four paintings, invite the viewer to consider the consequences of the reproduction of an art work; questioning what remains of its essence, argument, texture and technique once reproduced. These questions are present in the pieces: two made from photographs taken by the artist during a visit to the House of Canoes in 2007, and another by the appropriation of a folder, published as a record of an artist residency in Brazil in 2003, by the photographer Luisa Lambri. Araujo’s work also deals with the idea of showing the process of painting in interaction with its texts, for example in “Inacabada – Canoas 6,” where by taking the image of the front façade of the house, the “unfinished” areas are completed by the name of the colors from different parts in the painting.

Technically speaking, the Venezuelan painter follows a long tradition of landscape painting present in South America in the past centuries. His paintings contain utopian and formal qualities that bring to mind Brazilian landscape paintings by the painter Frans Jansz Post (XVII century), follower of Academic Dutch painting. Juan Araujo is a contemporary follower of this tradition. His paintings, conceived in series, do not document places he has visited, rather places that have already been represented by other artists. In this way, Araujo pays homage to and questions contemporary art by presenting new representations connected to the perception of an original work of art.