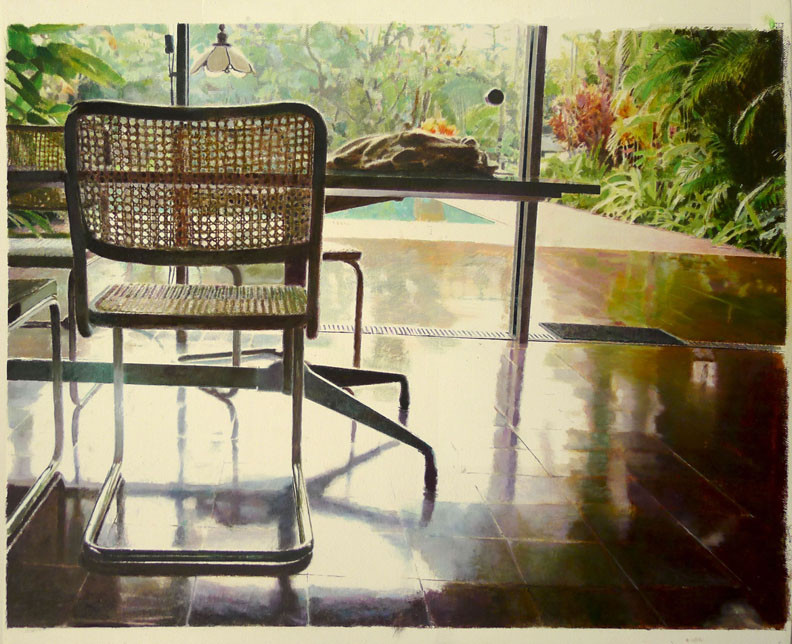 The exhibition fundamentally consists of two groups of paintings. The first group concerns the architecture of Marcos Acayaba, while the second reveals inventions on the tropical landscape. These two groups are articulated with other paintings featured in the exhibition, whose theme is the real or illusionary insertion of an abstract figure in the landscape, an idea that the artist began to develop in the exhibition entitled La Silla del Diablo [The Chair of the Devil], in Lisbon, in 2010.

This theme stems from Araujo’s work in regard to the representation of architecture and from his aim to emphasize the emblematic figure of historical architects such as Lina Bo Bardi, Mies van der Rohe, Carlos Raúl Villanueva, as well as to encounter the links between the modern architectural scene and the reality of its depiction in painting.
This supposed link is what leads Araujo to substitute the building-context relation by that of geometry versus nature, with the aim of highlighting the contrast between the graphic influences of modern abstraction as opposed to the organic density of the tropical plants. This parallelism allowed the artist to draw a series of fictions arising based on a determined architecture reality, thus allowing Oscar Niemeyer’s Casa das Canoas (1953) to serve as an example of a relation between Bauhaus and the atlantic forest [1] . But these inventions are only a rhetorical device or a metaphor of the public works by Burle Marx, who inserted the biomorphic forms, similar to Jean Arp’s figures, within the cities in parks and avenues. Thus, these reflections are not focused on a deviation of reality; rather, they are presented as a fictional illustration of history.

The title of the exhibition, A ilusão da transparência [The Illusion of Transparence], alludes to the title of a chapter in a book by Joseph Albers [2] that refers to the creation of an effect by which the physical experience is transformed into the visualization of an illusory space. This title allows for an association with Juan Araujo’s architectural speculations, with the impression produced by light and translucent structures, which Marcos Acayaba has developed since 1972, and which are present in the paintings presented in the exhibition, depicting the residences of Helio Olga, Baeta and Milan.

-----------------------------------
[1] In October 2007, Juan Araujo presented a series of paintings in the context of his first exhibition at Galeria Luisa Strina. This group of works came about after various visits to São Paulo and Rio de Janeiro, in order to visit specific architectural sites, such as the Casa do Jardim de Cristal, by Lina Bo Bardi, and the Casa das Canoas, by Oscar Niemeyer.
As the artist states: “the constant interaction in all of these spaces of materials like water, stones and glass motivated me to paint a world that is present in the history of depiction: reflections, inert figures, colors on the stones and the shadows of gardens.”

[2] The book referred to here was published in 1963, with the title Interaction of Colour. It can be partially accessed at the link: http://books.google.com.br/books?id=wN9o0OULXjIC&printsec=frontcover&hl=pt-BR&source=gbs_ge_summary_r&cad=0#v=onepage&q&f=false
www.galerialuisastrina.com.br