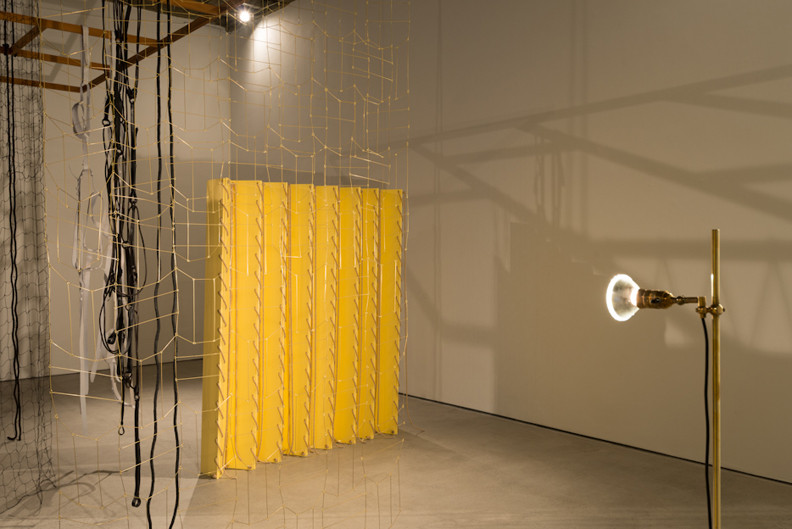 According to Beatriz Colomina it was Ariadne who conceived the first work of architecture, when she gave Theseus a ball of string to help him find his way out of the labyrinth after killing the Minotaur. To achieve this goal he resorted to a representation, making use of a conceptual device ? the ball of string. Ariadne's string is not a mere representation (within the infinities possible) of the labyrinth: "It is a project, an authentic production, a device that winds up instating an imbalance in reality."

This project is based on various stints of research that I have been carrying out since my first trip to Brazil in 2008. I became interested in linking two buildings, which were constructed at the end of the 1940s, one in Lisbon and the other in Rio de Janeiro. Both incorporate the vernacular model in their modernist architectural language.

A structure made of teka wood is suspended by ropes in the gallery room. It is an open structure, whose parts create a division in the space. It is the "mother" sculpture that shelters all the others. This "mesh" made on a 1:1 scale reveals a "window" in a building in Lisbon: the residential, commercial and services building named Bloco das Águas Livres, 1953?1956, designed by architect Nuno Teotónio Pereira. According to Ana Tostões this is perhaps the "only consequential example of a housing unit in Portugal."

This multi-use building proposed great novelties in regard to the then-current concept of residential buildings. Idealized to serve a community and not only to "contain people," it was planned with collective services that evinced a progressive view of society and a desire to introduce modernity into daily life. It arose when an insurance company wanted to invest some of its capital in a high-quality work of architecture for upscale clientele, thus allowing for the construction of this sort of building. Novel construction materials were used, with a "realism" that went beyond the more dogmatic positions of the "modern movement."

From the structure suspended in the gallery space other sculptures "drop down," made of leather, nylon ropes, nylon-line mesh, and brass wire. Some of these pieces work as "walls" and are tied by ropes, referring to parts of the walls of the Bloco das Águas Livres Building.

Other sculptures hanging in this structure continue the series of sculptures called random intersections. They operate as "specters," by the absence of a volume that would give them form and meaning.

Lúcio Costa built three apartments blocks in Rio de Janeiro at Parque Guinle. The three rectangular volumes called, respectively, Nova Cintra, Bristol and Caledónia were built in the years 1948, 1950 and 1954. According to the principles of the European avant-garde and under Le Corbusier's influence, these blocks were the first buildings in Brazil to be constructed on pilotis, and in a certain way they influenced Lúcio Costa's design of the city of Brasilia.

A myriad of fragments of elements existing on both of the façades are reproduced in different materials and different consistencies, containing their own meaning and charge. These elements are juxtaposed in layers, in a fragmented way, filling or emptying the space.