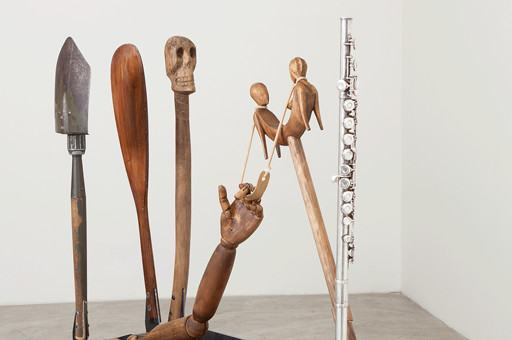 Pedro Reyes, born in 1972 in Mexico City, where he is based, will present a solo show at the gallery featuring five never-before-shown installations.

Suizas Navajas [Jacknives Swiss] is a traditional version of the Swiss jackknife, re-created on the basis of objects bought in flea markets in Mexico City. The jackknives have received new functions and mechanisms, introducing, for example, a flute, a spoon and a telescope. The interaction with the public expands the possibilities of different combinations of each jackknifes’ multiple uses, creating a different tool each time it is used.

Following the same proposal of altering the original functions of everyday objects, the work The Tubular Bells consists of a series of wind chimes manufactured on the basis of rifles, pistols, machine guns and parts of revolvers. The chimes are meant to be hung in trees. The effect of the wind in the chimes establishes an environment of sound that serves as a reminder – an agent of death converted into an agent of life.

This work is the continuation of the artist’s research involving firearms, which has already produced the projects Palas por Pistolas [Shovels for Pistols], where 1,500 firearms were transformed into 1,527 shovels, which in turn were used to plant 1,500 trees, as well as Disarm, where weapons were transformed into musical instruments.

The work Cuerpomatico [Bodymatic] is developed on the basis of a table on which various objects gathered by the artist are arranged, composing a tactile piece to be touched and felt by the public. The objects are pieces of stone, glass and other materials destined to be used for massaging, caressing and rubbing. Each of the materials produces a specific sensation that is not only physical, but also a nostalgic activation of memory.

The installation Colloquium is composed of sheets of translucent marble, cut in the shape of comic-strip speech balloons, structured like a castle of cards. Each sheet contains various voices, languages and contents. In counterpoint to the Latin term “colloquium” whose various senses include “a lecture or assembly focused on a determined subject,” this work presents an architectural and conceptual overlaying of various discursive fragments.

The work Os Terraqueos [The Earthlings] presents an elongated human body hand-woven from wool, with arms that sprout along the torso, like a centipede. Some of the hands are holding tools and weapons, while others make gestures of greeting, adoration or farewell. These objects and gestures serve as allegories for the multiple definitions of the human species: Homo faber, Homo ludens, Homo demens, Homo economicus, Homo reciprocans, Homo necans, and Homo politicus.

In a certain way, this work can provide us with a key for interpreting the exhibition, which is a result of an archaeological game proposed by the artist, comparing man’s discursive practices with his production and use of tools. This game involves irony, when the artist presents various versions of Homo sapiens, as well as playfulness, in the case of the tactile objects, and even redemption, by deactivating weapons and transforming them into sound-producing instruments.