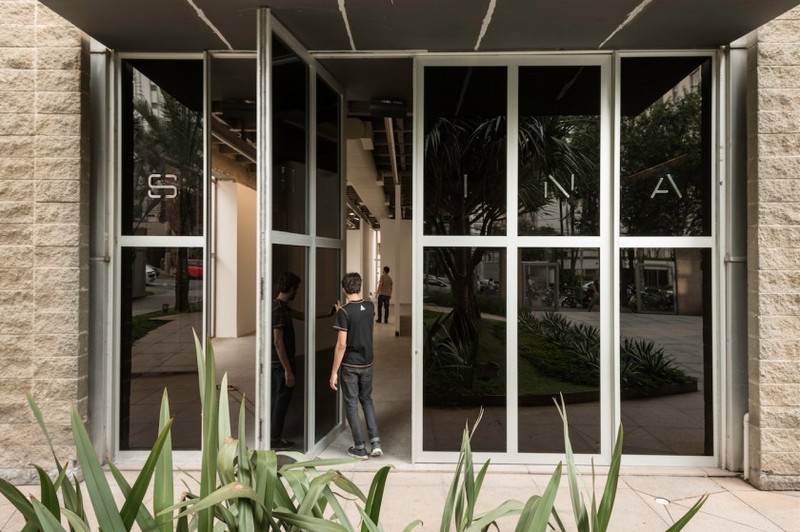 Galeria Luisa Strina is delighted to present an exhibition of new work by Rio de Janeiro-based artist Renata Lucas. Lucas’ work often takes the form of architectural interventions within the gallery environment and its surroundings. These playful displacements refocus the viewer’s mind, breaking up the expected. As a result the audience collectively engages with the environment, creating a new social experience.
Lucas begins each project with personal investigation of the chosen site, subverting the social information embedded within the space and its surroundings. Addressing every-day surfaces and structures, the artist offers an alternative approach to spatiality through the introduction of imagination and play. Often, Lucas implies presence by drawing attention to something absent.
Renata Lucas’ show at Galeria Luisa Strina is divided in two parts. The first one, opening this Saturday 22 March, uses the gallery space as a mock up, splitting it into its basic architectural elements that generate a new dynamic movement through the space. The second part will be the launch of Galpão Luisa Strina (Luisa Strina Warehouse) [ ], which is part of “the museum of the diagonal man”, a program of projects by Renata Lucas that will unfold throughout this whole year, in partnership with the Absolut Art Award.
Renata Lucas was born in Ribeirão Preto, State of São Paulo, in 1971. Lucas got her Bachelor Degree and Master’s Degree at UNICAMP (university of Campinas), and finished her PhD at the University of São Paulo in 2008. Most recently, Lucas was awarded the Absolut Art Award. Previously, she participated in group shows at Inhotim (2012); dOCUMENTA (13), Kassel/Kabul (2012); Istanbul Biennial (2012); la Biennale di Venezia (2009); and Tate Modern (2007). Her solo shows have include Peep-Hole, Milan (2011); the KW Institute for Contemporary Art, Berlin (2010); and Gasworks, London (2007). Since 2007 Lucas has been living in Rio de Janeiro, and sharing her time between Rio, São Paulo and a number of residencies abroad, including London, Stockholm, Berlin and San Francisco.
www.galerialuisastrina.com.br