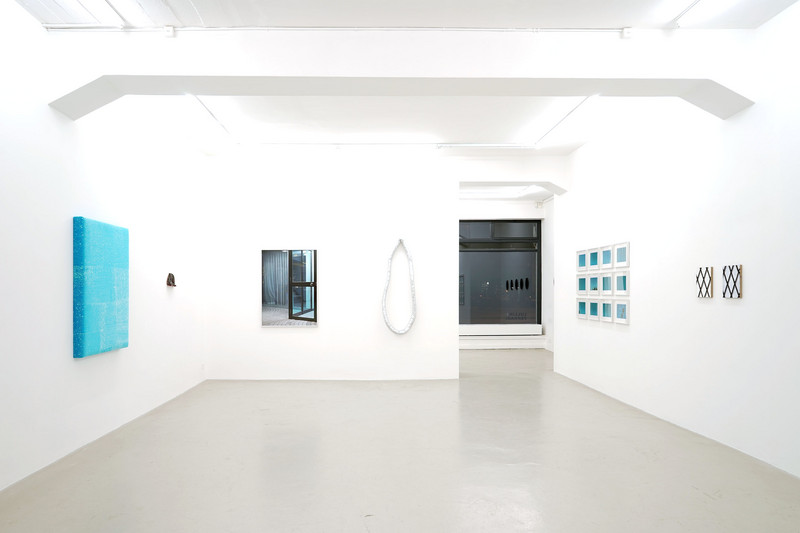 We are very pleased to present a group show with works by artists from the gallery and by some guests. The point of departure and title of the show is part of a quote by the pioneer of conceptual art Marcel Duchamp (1887-1968). The significance of Marcel Duchamp is evident in many of our exhibitions, sometimes in obvious sometimes in more hidden ways.

This autumn the Centre Georges Pompidou in Paris dedicated a fascinating show to Duchamp entitled „la peinture, même“. The exhibition clarified, that Duchamp revolutionized painting by adding grey material (matière grise) to it. With this he understood reflecting mental work. In one of his masterpieces The Bride Stripped Bare by Her Bachelors, Even (La mariée mise à nue par ces célibataires, même (1915-1923) he implemented his considerations. The Large Glass, another name for this painting on glass, is accompanied by 93 notes and scribbles, which Duchamp published as facsimile in the Green Box 1934 in an edition of 320 copies. The complete quote, of which the title of our exhibition is extracted, reads „Painting of precision, and beauty of indifference“. Paintings are included in our show, but beside it contains sculptures, photographs, prints and objects, therefore we renounced to the first part of the quote. Our concern is to show a certain mind-set as it is described with the sentence „beauty of indifference“, and which might have been the trigger to some of the works in our show. In the whole quote by Duchamp seems to lay a contradiction: Does one can be at the same time precise – by the way a description very much in fashion now in the art world – and indifferent? Do the characterisations „painting of precision“ and „beauty of indifference“ to a certain degree not rule out each other? But if one considers, as Duchamp did, art as to make, this apparent contradiction is relativized: In the daily manual self-absorption one can achieve a degree of indifference generating works of precision.

In the paintings by the French artist Lena Hilton one can catch in both group of works the four large format canvases with delicate margins as well as in the smaller colour ovals a dedication and selfabsorption letting appear a beauty of indifference. Her paintings touch central questions of the medium. Notably the relation between figure and ground is constantly questioned anew. The format of the smaller oval paintings implies the challenge of the beholder with the work. Here Lena Hilton inquires mixtures of acrylic paint until she reaches with colour hues a black mixed colour. Also she experiments with the depiction of the stretcher on the canvas. A wonderful, incidental work in iron by Edit Oderbolz completes Hilton’s group of works.

Mamiko Otsubo considers her condensed collages on Mylar as daily exercises and concentrations in finding forms. Often she coquets with known forms from famous designers but questions them at the same time. In the two works shown in the exhibition she refers to features conceived by the design group Memphis around Ettore Sottsas. Her iconic collages are sometimes outlines for later sculptural works. Otsubo sounds out boundaries and questions common beliefs.

By John Baldessari a very early photographic work from 1973 is included in the show: It is called Throwing Three Balls in The Air to Get a Straight Line (Best of Thirty-Six Attempts) and anticipates many of the later works of this important conceptual artist from the West Coast. Alexander Heim is included in the show with two works in two parts called Unlikely Liaison. In these works Heim explores principles of chance. Their unfinished status and their constant change interest the process artist, who also in his videos deals with systems and behaviours. His research touches in this case the flowing speed of glue between acrylic glass and fabric. The works hold a haptic quality and allow an amorphous plurality of interpretation.

wiedemann/mettler contributed two works in different media to the show. In a photograph a door allows the access on a terrace in the borough Minato-ku in Tokyo. The depiction oscillates between the inside and outside view of a room. Through a curtain the sea of lights of the metropolis is visible. In its rigorous order the photograph has the character of a model and shows a stage setting on which dramas seem to unfold. The conception of the photograph simplifies to the beholder the access to the image. The velvety, nearly corporal work Star Flakes 2 seems to reflect the night sky over Tokyo. Colour has been removed from the velvet cloth by simply applying small drops of leach. As a result a sky full of stars in rectangular patterns emanated. The work convinces through the accuracy through which the points of colour have been removed.

By Benedikte Bjerre (*1987 in Copenhagen, studies at the HfBK Städelschule in Francfort) we present two works, a video and a photograph, discovered at Rundgang, the yearly presentation of works by students of the Städelschule. The video has been shot in a train from the mobile device it is shown in the gallery. The sequence shows a train compartment on the journey from Mestre to Venice. Romantically the wind blows through the curtains of the night train just while arriving in the morning in Venice. The nearly abstract photograph combines elements from Cologne (Rinowa) with ones from Hamburg (Montblanc).

The appearance of the show will change as works will be added from other artists and others removed. Amongst them might be small sketches and valuables transporting the idea of “beauty of indifference“ and therefore holding in high esteem the spirit of Marcel Duchamp.

The relaunch takes place 5 February from 6 to 8 pm. Screenings of the movie Richard Hamilton in the Reflection of Marcel Duchamp by Pascal Goblot at 6.10 pm and 7.10 pm.

Alexander Heim, born 1977 in Hamburg, lives and works in London. Studies at Hochschule für bildende Künste in Hamburg, Chelsea College of Art und Goldsmiths College, London (MA). Many group exhibitions in Europa, amongst others in the Aargauer Kunsthaus in the exhibition „Yesterday will be better“, 2010; solo show at Kunstverein Freiburg im Br. „Bonnets nouveaux“, 2012

Mamiko Otsubo, born 1974 in Nishinomiya City, Japan, lives and works in Los Angeles. Gallery exhibitions in New York, Zurich, Berlin and Copenhagen. Institutional group shows, amongst others in the SculptureCenter, New York and in Rønnebaeksholm in Danmark

wiedemann/mettler, Pascale Wiedemann, born 1966, Daniel Mettler born 1965 Many solo shows in Switzerland and abroad; institutional solo shows in the Kunstraum BINZ39, Zürich, and in the Haus für Kunst Uri 2014; Included in group exhibitions, amongst others in "Gastspiel – Schweizer Gegenwartskunst in the Museum Rietberg"
www.lullinferrari.com