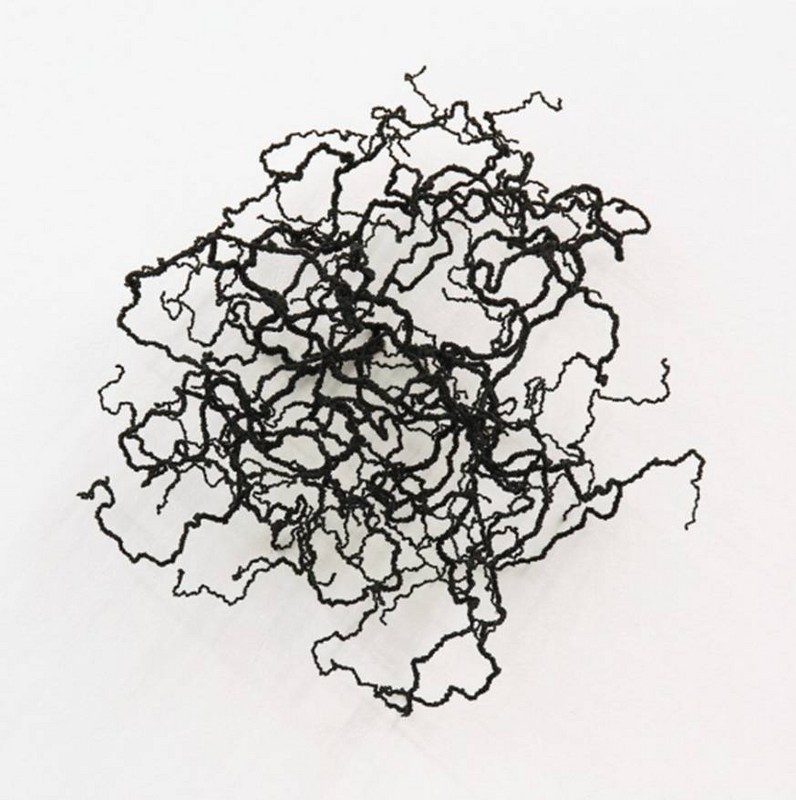 We are pleased to show new works by Franziska Furter (*1972) in her first solo exhibition in our gallery. In 2009 in the gallery group exhibition Traces and Impressions (with Anna Amadio and Edit Oderbolz) we introduced her work for the first time to the public in Zurich by including three series of her new works on paper. Franziska Furter‘s work was shown in many solo and group exhibitions in museums and galleries, in Switzerland and abroad. Last year she had two outstanding exhibitions in institutions: Her intelligent intervention Squall Lines in the Palais de Tokyo in Paris followed a playful handling of the challenging space of the Chapelle St-Quirin in Sélestat, an exhibition space of the FRAC (Fonds Régional d‘Art Contemporain) Alsace.
In her exhibition Hyle in Zurich Franziska Furter further develops ideas and works, which she had for the first time introduced in her two exhibitions in France. From a certain distance in time one can observe a logical consequence and consistency in her precise artistic approach: Franziska Furter creates consequent series of works, which interlink with each other and which are placed under an overall artistic vision.
Hyle, the title of her show, leads the interpretation of her works its way. Hyle means mouldable substantial material, base of all existence. One could say, that Hyle signifies the contrary of shadow, which is not a material, but a depiction of a material model: For its existence the shadow is dependent on matter. The new works by Franziska Furter have to be placed in this phenomenological domain. For her new sculptures and drawings the artist found an important inspiration in the fantastic novel The Other Side (1909) by the draftsman Alfred Kubin.
As most of his drawings also his novel deals with the shady side of existence and dream worlds.
The first room of the exhibition is occupied by Rift, a long row of black pennants. The row of pennants forms a drawing in space; it cuts with its aggressive, dentoid jags the spatial structure and forms simultaneously a lock between inside and outside. The pennants are a reflex of Franziska Furter‘s residency in Cairo last year: During Ramadan are hanging between the houses colourful pennants, which the artist copied and integrated in a black and therefore more abstract variation in her work.
In the second room of the gallery Franziska Furter evokes with precisely placed works a magical atmosphere. In the middle of the exhibition space are positioned on pedestals four shapes called Crystal Silence I-IV. Made with black Swarovski crystals they contain formal qualities similar to the ones seen in the pennants. As the shapes are variations on a theme, it is not surprising that their titles follow the one of a jazz record by Chick Corea and Gary Burton from 1972. The sculptures describe states of materiality and refer to music and the invisible.
On a pedestal next to Crystal Silence I-IV stands the glas tower Alu. The equivocality of the word Alu, known mainly as an abbreviation for Aluminium, fascinated the artist and was the reason why she chose the word as the title of the glass tower. Alu signifies an Ethiopian and a Philippinian volcano, but also a Mesopotamian night demon and an asteroid. Aside from this it is also a word on an old Celtic rune stone, which means in this context presumably salvation and was worshiped as a magical sign. The glass used for Alu has a special background, as it is recycled from Franziska Furters installation Rime in her exhibition Squall Lines in the Palais de Tokyo. The glass was not be seen in her exhibition in Paris as it was covered under a carpet. But you could hear it, as it was scrunched by the hundreds of visitors, walking over the carpet. After the end of the exhibition the elements of glass were sent to Franziska Furter to Berlin and she used it – making it now visible – for the glass tower.
Beside the sculptures in the middle room of the gallery are hanging three large, filigree pencil drawings called Dust I-III. The source material for these drawings derives from detail of images, which in general are not really noticed. This can be a shadow in a corner, a dark background or a light declension – all these images have to do with light and shadow. The title of the series of work Dust indicates that the new group of drawings is a continuation of the drawing series called Draft. The dust is dispersed through a draft. In addition Dust also refers to the trilogy His Dark Materials (1993) by Philipp Pullman. In these novels „Dust“ is a kind of „Dark Matter“, which renders intelligent life or the connection between soul or body or magic possible. In science „Dark Matter“ is a non-verifiable, hypothetical but nevertheless existing form of matter. The meticulous drawing variations Dust I-III are to be placed in this semantic field. In no circumstance are the drawings illustrating the term „Dust“, but they open up in their exact and stringent composition manifold associations. Beside the Dust drawings are positioned smaller works on paper called Fath. These playful doodles are based on the larger wall drawing Fathom conceived by Franziska Furter for her intervention in Sélestat in the Alsace. These drawings visualize the structures of flashing ideas.
All works in the exhibition Hyle are situated in the area of shadow and matter. Franziska Furter generates through her sculptures and drawings moods, which are referring to elements outside of the artworks. Her art is not founded on a philosophical theory or an imposed idea, but is developed out of a grown concept, which relates to earlier series of works. Franziska Furter is not envisaging a recurrent theme in her work, but is unfolding the sediments of visual layers of her densed artistic approach.