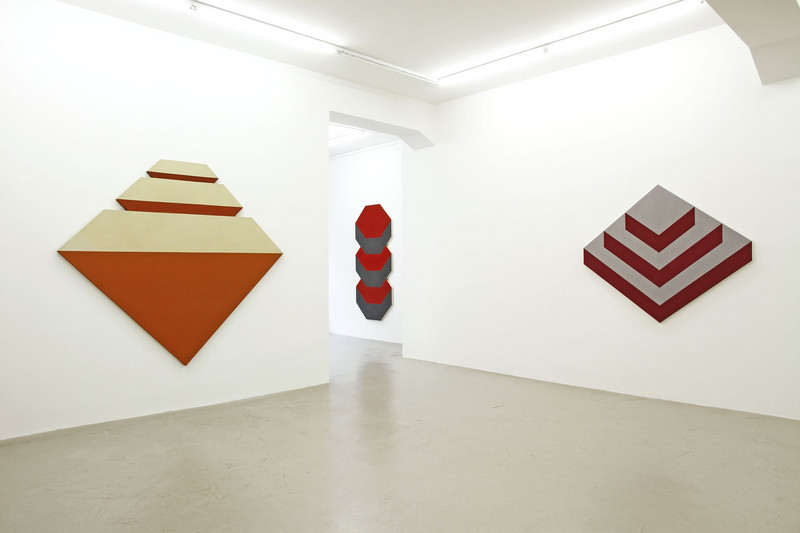 We are delighted to present the third exhibition in the series called "Variety". In this format we are showcasing thematic group exhibitions and individual projects with a short duration. In Variety 3 we are presenting an outstanding group of works by the Swiss artist Pierre Haubensak realized 1967-68.

In the group show Rhythm in it in the Aargauer Kunsthaus last summer a large shaped canvas in complimentary colors green and red titled Paravent (1967) by Pierre Haubensak caught our eye. The work is in every respect exceptional. The large dimensions are extraordinary and the dynamic of the color fields is not only responsible for the rhythm within the painting but is also pivotal for the extension of the field of vision into the space of the beholder. This „shaped canvas“ had a special appeal to us. The work can be related to simultaneous works from the American avant-garde from Donald Judd, Frank Stella, Ellsworth Kelly to Kenneth Noland. Pierre Haubensak was up to date.

Already at the opening of the exhibition Rhythm in it we approached Pierre Haubensak and asked about the origin of this painting. He told us that he had in the 1960s a studio in Ibiza and that he executed there a series of large-sized paintings testing new artistic means. In 1967, by taking off the stretcher, he transported the paintings on the roof of his car to Zurich. In his studio in the Allmend Brunau he complemented the series with few other works in the same spirit, as a photograph of the studio in the winter 1967-68 taken by his brother Jean Haubensak and used for our invitation card, reveals. In the brief conversation in Aarau Pierre Haubensak told us, that the majority of these paintings still exist. We therefore asked him if we could visit him in his studio to see them. In the studio Pierre Haubensak showed us a series of „shaped canvases“ from 1967-68. Their artistic presence is overwhelming and in our mind’s eye a precise alignment for an exhibition immediately unfolded. The real presence and the immediacy of these paintings is amazing. The interior forms of the canvases extend through their geometric and sensual color presence to the space of the beholder. In these works Pierre Haubensak deals with substantial questions of image making: In them he explores the figure-ground-problem, a central concern in the œuvre of Ellsworth Kelly, and sounds out the principles of creation of the simultaneous artistic movements minimalism and color field painting.

We are very grateful to Pierre Haubensak that he was willing to collaborate with us and to show these amazing works to a curious public. We also want to thank him that he repainted two destroyed „shaped canvases“, Zikkurat (1967/2013) and Hexamagneton (1967/2013) for the exhibition anew and restored some of the remaining paintings. Without his enthusiasm and great commitment this show would not have happened. Our thanks go also to Brigitta Rosenberg from the Galerie Rosenberg who supported this project.

Pierre Haubensak (*1935 in Meiringen) is one of the most important contemporary Swiss artists. He overviews a great career with many solo and group exhibitions. Already in 1958 to 1960, immediately after his studies in Basle and Geneva, his big curiosity let him choose Paris as his domicile. In the 1960s he had a studio and a house in Ibiza and from 1969 to 1977 he lived in New York. Since 1978 he lives and works in Zurich.
www.lullinferrari.com