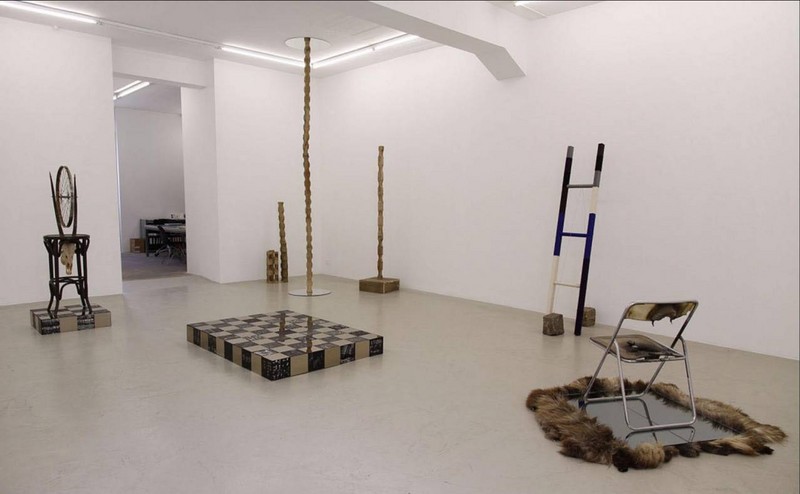 We are very pleased to show new works by the German artist Sebastian Hammwöhner (born 1974 in Frechen) in his second exhibition in our gallery. In his show with the initially enigmatic title Crépuscular Dawn Hammwöhner dedicates himself nearly exclusively to the genre of sculpture; this completely contrary to his first exhibition at Lullin + Ferrari in which he combined batons wrapped with wool with large enigmatic pastell drawings.
The title of the exhibition Crépuscular Dawn shows the interpretation of the sculptures a direction. Crépuscular Dawn means „Dusky Dawn“, but also „Dusk in Dawn“. Hammwöhner designates this contradiction in itself, linguistically speaking an oxymoron, as one of the main principles of the exhibition. Through their materiality the sculptures obtain a sombre patina lending to the whole exhibition a very peculiar „crépuscular“ mood, and giving the show the appearance of a Gesamtkunstwerk.
In the first room the assemblage figure Para Dieswärts greets the visitors. Made of found material, elements of the specific artist‘s perception of his surroundings, the object is placed on a pallet. Recognizable from the invitation card for the show, there altered through its pixelation though, is a bee hive on which a pyrit is positioned. This head of the figure, the bee hive, is decorated with a fur collar. The body of the figure is indicated through a blanket, on which four volcanic stones are positioned. The title of the work Para Dieswärts signifies, that the figures glides away from any interpretation.
The viewer can‘t get hold of the figure. Hammwöhner looks at the world with a double view and let us take part at his very specific vision. He presents the world as an illusion of the world and questions constantly our perception: The materials constituting the figure Para Dieswärts, are each designable as found objects, but are also, in combination with the other elements, noticable as part of a figure. A figure becomes visible which isn‘t one. Movement plays another important part in the exhibition in general and in Para Dieswärts in particular. In Para Dieswärts movement appears manifold: The volcanic stones had been spit out from the interior of the earth; the pallet is associated with transport and therefore movement; simultaneously the pallet is the base on which the assemblage stands.
The designation of time is a further important facet of the exhibition. In the work Be as such made of painted mirror cubicles forming a chess pattern the depiction of time and space is inscribed; the mirrors are enlarging the gallery space and the chess pattern alludes again to movement. The pure base itself is the artwork and the absence of an object is the subject matter. Hammwöhner realised the black colour on the mirror plans by mixing acrylic with ashes. The blackand-white pattern refers to a possible movement of the absent chess pieces and points to the inventor of the readymade Marcel Duchamp, a passionate chess player. An assemblage made from an antelope scull, a bicycle wheel and a barstool, standing on a mirrored base, is a clear reminiscence to one of the famous readymades by Duchamp called Bycicle Wheel.
The wooden steles Chewing Gum Telegram, Isi and Tomorrow‘s Yesterday clamped btetween two mirrors, as well as the mural piece Falter standing on a symmetrical tar board cubicle, contain as well references to art history. The wooden steles are inspired by the monumental sculptures of the Rumanian artist Constantin Brancusi. In the work Falter the act of folding itself is one of the themes; folded pieces thematize in themselves the passing of time in space. Hammwöhner creates a surrealistic mirrored Wunderkammer. The show allows a lot of possible associations and patterns of perception, which opens up to the viewer through his or hers accurate observation. By doing this the public has to keep in mind, that one of the artist‘s inspiration is a sentence by the German philosopher and theologian Jakob Böhme (1575-1624) saying that contradiction is an important moment in all appearances of reality.
www.lullinferrari.com