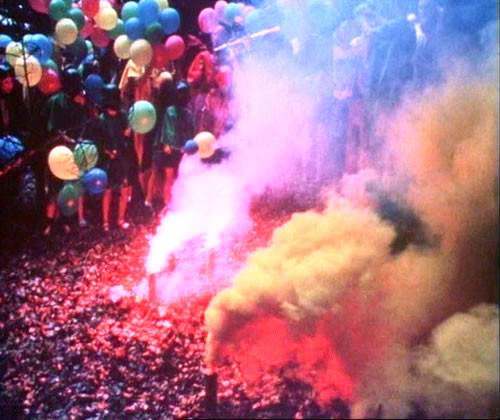 This exhibition devoted to Benet Rossell (Àger, 1937) deals with the large body of work of this versatile artist from two of its aspects, film and calligraphy, which reveal the crossovers that appear constantly in his work. The show traces a fragmented route without interruptions, which shuns the conventional retrospective exhibition and sets out to track down different ways of approaching a work which is constructed like a weft of different languages and media.

Curator: Bartomeu Marí. Organisation and production: Museu d'Art Contemporani de Barcelona (MACBA).
Rossell began to study law, economics and sociology, but was soon drawn to artistic activity, which he deployed in many different disciplines, from drawing and sign writing, painting, tapestry and ceramics, action, experimental and commercial film, poetry and theatre, amongst others, but always with a highly personal style and with unconventional interventions, such as optical objects, cultivated works, notarial deeds, comics without words, film scripts... Throughout his career he has often worked with writers, poets, artists and film-makers. In 1964 he moved to Paris, and made many journeys and sojourns in other countries, among them India and Nepal. In Paris he came into contact Joan Rabascall, Antoni Miralda and Jaume Xifra, all close friends who have worked on a number of common projects. Rossell recorded the ‘Ceremonials', parties and rituals in which Dorothée Selz also took part. In Paris he worked as assistant to sculptors such as Apel·les Fenosa, and studied theatre and film on Jean Rouch's Ethnographic Film Committee.

The exhibition contains over a hundred works, many of them never shown before, and pays special attention to his work in the cinema, closely linked to his sign and calligraphic drawing. It also presents Rambles 24h. (1981), done with Muntadas, a video installation that analyses public and social communication. There is also a project specially developed for this exhibition which takes the old cabaret on Avinguda Paral·lel in Barcelona, El Molino, as the skeleton of a broader work on the district. It is a sentimental, social and political chronicle of the transformation of lowlife Barcelona, the prohibitions of the Franco regime and the present institutional ‘recovery'. Despite its abstract appearance, his work has a story-telling component. Rossell is a tracker in the style of some of his imaginary but very real characters, who appear constantly in his drawings and create micro-worlds: micro-theatre, micro-opera, micro-graphia, micro-action... These small gestures reveal big stories, street characters, events and new roads to explore. The references to the earth (almonds, water, salt, trees...) intermingle with ideas such as the infinite, tracking places, the void, humour and irony.
www.macba.es