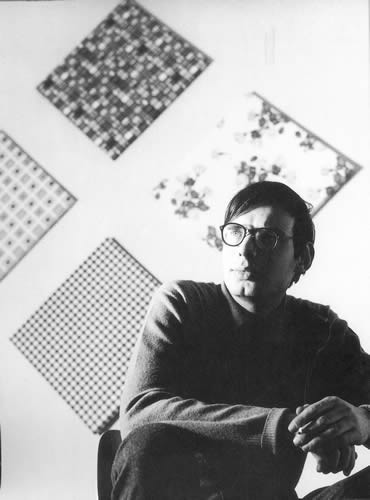 Konrad Lueg, 1967
WITH A PROBABILITY OF BEEING SEEN. DOROTHEE AND KONRAD FISCHER. ARCHIVES OF AN ATTITUDE

Konrad Fischer (1939-1996) was the leading gallery owner in Düsseldorf from 1967 to his early death. The inaugural exhibition on 21 October 1967 presented a specific installation by the American artist Carl Andre, his first show in Europe. Fischer's purpose was to introduce the leading creators of his generation, from Minimalism to Conceptual Art, to the continent of Europe. “Bei Konrad Fischer”, his peculiar way of inviting people to his gallery, was more a way of acting as host to the artists and their works than selling them. Even so, for many artists an exhibition at the famous Neubrückstrasse venue, was the first step over the threshold of European collections, both public and private. Many American artists like Andre, Sol LeWitt, Robert Smithson, Maria Nordman, Dan Flavin, Bruce Nauman, Robert Mangold, Brice Marden and Robert Ryman had their first exhibition thanks to Fischer. He also worked with Daniel Buren, Gilbert and George, Reiner Ruthenbeck, Gerhard Richter, Mario Merz, Richard Long, Jan Dibbets, Giuseppe Penone, On Kawara, Jannis Kounellis, Alan Charlton, Hanne Darboven, Bernd and Hilla Becher, Lothar Baumgarten and Joseph Beuys, as well as the generation after 1982 such as Thomas Schütte, Harald Klingelhöller, Juan Muñoz and Gregor Schneider.

Parallel to the opening of his gallery, Fischer began a series of group exhibitions that were later called Prospect, the first in 1967 and 1968, and later in 1971 and 1974 at the Düsseldorf Kunsthalle. In 1972, he was invited by Harold Szeemann to be curator of part of documenta 5. Before his career as gallery owner, he studied fine arts and painting at the Düsseldorf Art Academy from 1958 to 1962 with Gerhard Richter, Sigmar Polke and Manfred Kuttner. As an artist he used his mother's surname and signed his works Konrad Lueg. His performance (with Richter) Leben mit Pop-Eine Demonstration für den kapitalistischen Realismus, which was given between 11 and 25 October 1963 in the showroom of a furniture store, has been famous ever since. But Konrad Lueg brought his activity as an artist to a halt when he opened his gallery in 1967. His heirs have conserved several of his works, among them paintings in Pop style, drawings and objects, which have rarely been exhibited.

The exhibition at the Museu d'Art Contemporani de Barcelona (MACBA) will be divided into three sections that will explore the following periods: Konrad Lueg (Fischer), the artist; Konrad Fischer, the curator, and Dorothee and Konrad Fischer, the archives. On the occasion of the exhibition a catalogue will be published with texts by Thomas Kellein, Catrin Lorch, Friedrich Meschede and Guido de Werd, designed by Walter Nikkels.