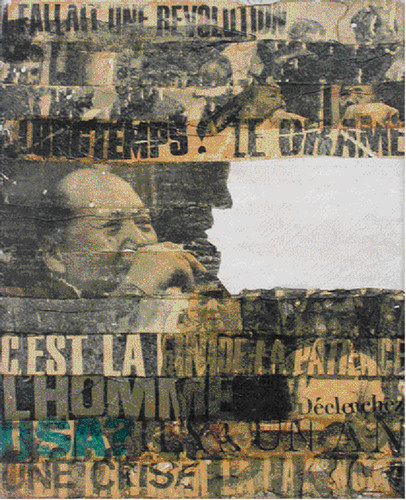 “A genius is someone who denies having talent”, said Gil J Wolman, one of the most enigmatic and discreet artists of the 20th century, whose successful transversality (poetry, film and visual arts) is proof of his infinite contemporariness. This monographic exhibition, the first to be devoted to the artist in Spain, brings together 200 works and documents. It will be preceded in May 2010 by a course on Lettrism and Situationism, which will lay the ground for its reception. Wolman was born in Paris on 7 September 1929. In 1950, after engaging in a motley array of activities including knitter, he joined Isidore Isou and the Lettrist movement with Jean-Louis Brau, Gabriel Pomerand, François Dufrêne, Maurice Lemaître and Guy Debord. As a poet, he invented the megapneumie, a poem of breath and pure sound which he belched at his legendary recitals at the Tabou (1950), the Musée d’art moderne (1961), the Théâtre National Populaire (1963) and the Théâtre de l'Odéon (1964), in Paris.

In response to Isou’s challenge and his film Traité de bave et d’éternité (1951), in the same year Wolman made L'Anticoncept, a censored 'atochrone' film which would influence Guy Debord’s film Hurlements en faveur de Sade (1952), he paid tribute to him by including one of Wolman's Lettrist poems at the beginning. With Debord, but also with Brau and Berna, he founded a dissident Lettrist International (IL, 1952-1957), the antechamber of the future Situationist International (IS, 1957-1972). Debord excluded him from the IL before the creation of the IS, even though Wolman had prepared its spirit and content. With Debord he signed the Mode d’emploi du détournement, which he would put into practice (some years before Brion Gysin and William Burroughs's cut-ups) with J'écris propre (1956).

In 1959, Wolman resumed his rare art experiments with Brau before associating himself with certain Lettrist events from 1961 at Galerie Weiller, and at Galerie Valérie Schmidt (1963), where he showed his masterly Lettrist paintings and his brilliant Art Scotch compositions for the first time. In 1964, during an exhibition by the group at Galerie Stadler, he broke with the Lettrists and created the almost virtual Second Lettrist International with Brau and Dufrêne. Continuing his art work with surprising originality, particularly the Art Scotch, until the mid seventies, in 1977 he created the Separatist Movement, being its only member, and after that worked in Wolman’s Land, bringing about "a space on a surface that has been reached through its limits" (L'arbre séparé, Les mannequins séparés, Duhring Duhring, Déchets d’oeuvres, etc). In the 1980s and until his death in 1995, Wolman published a score of books, most of them in small print runs, through his Éditions Inconnues. He also made a dozen videos and worked increasingly from an (anti)conceptual stance through notable series.