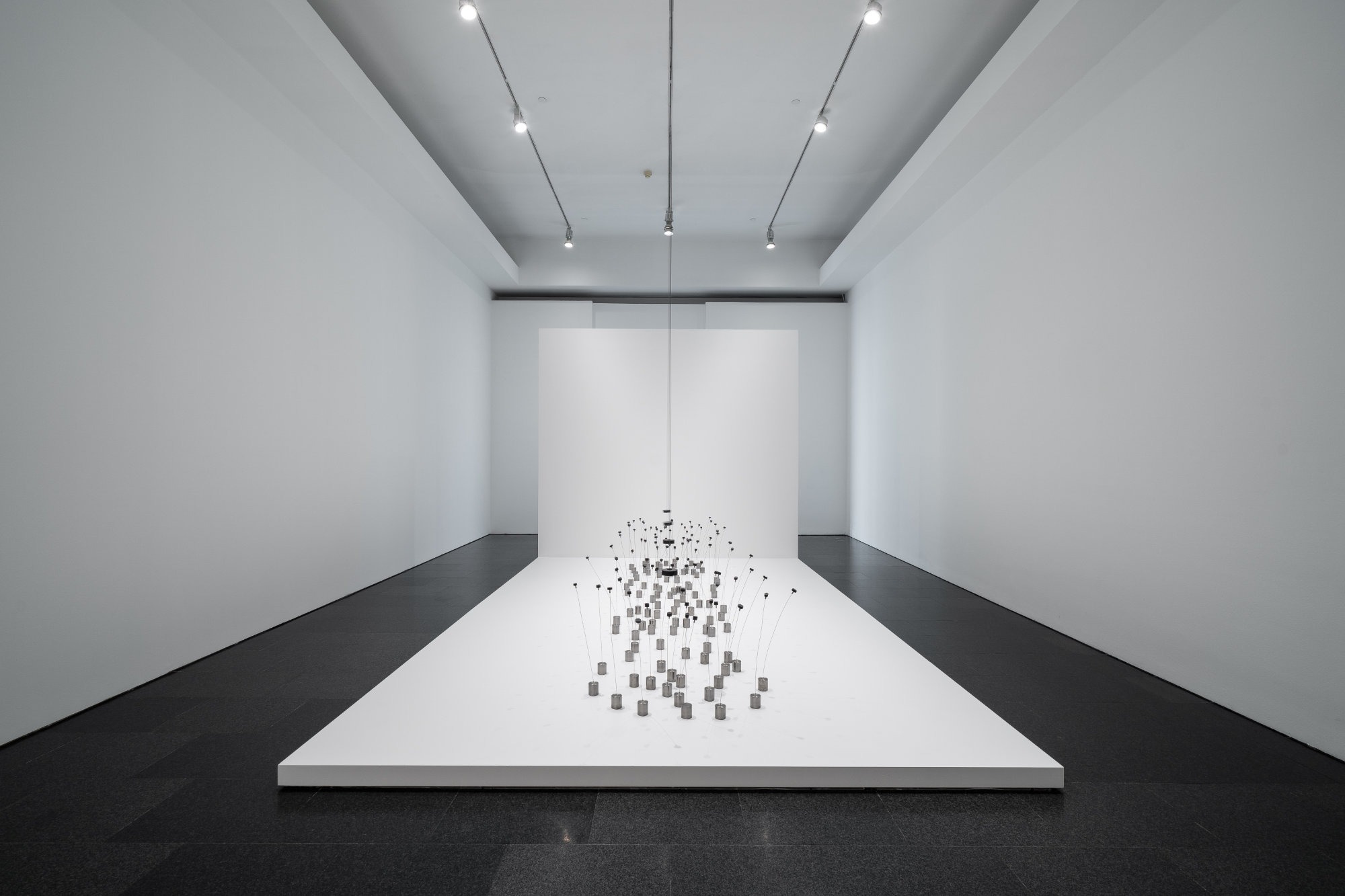 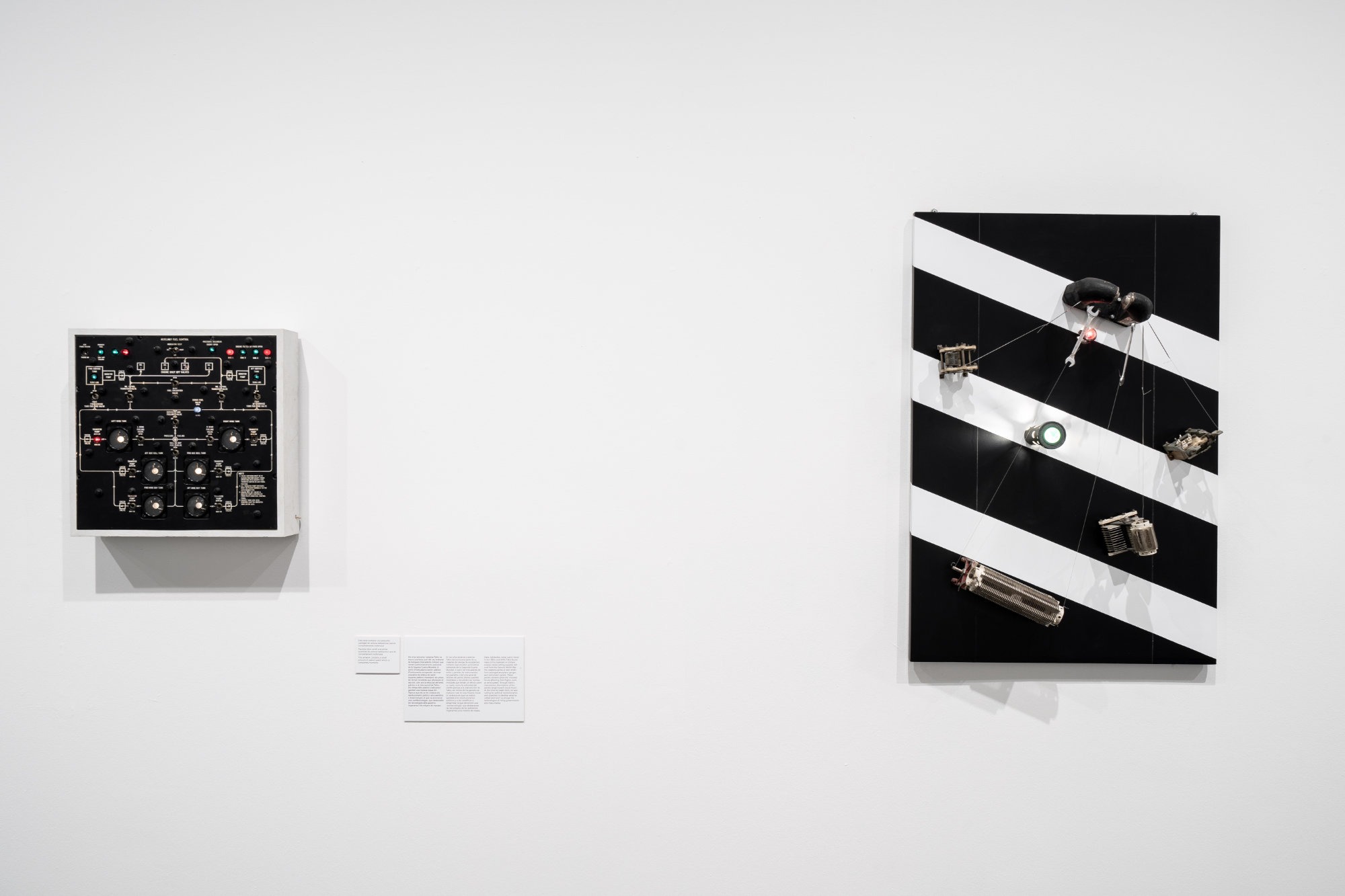 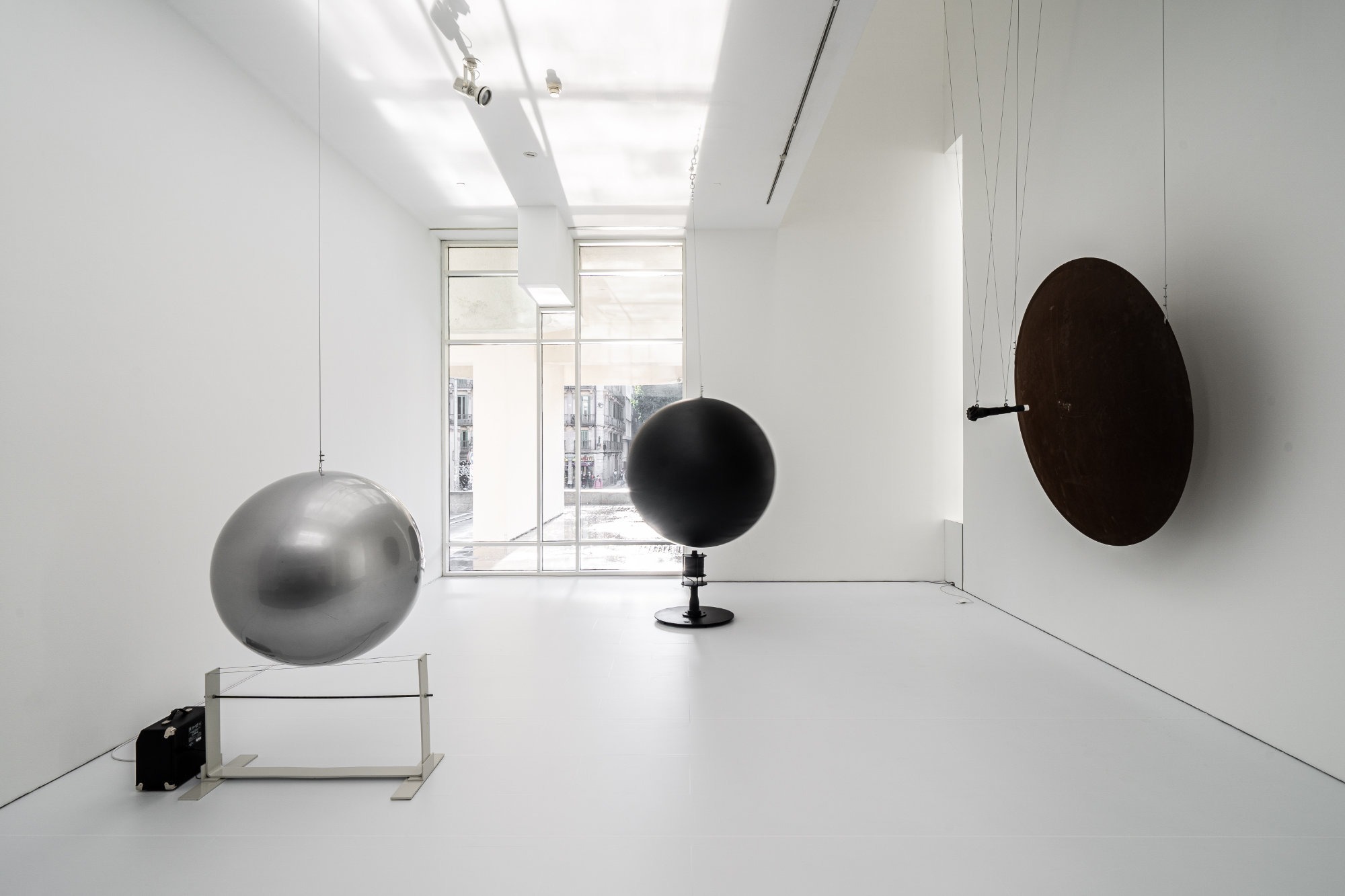 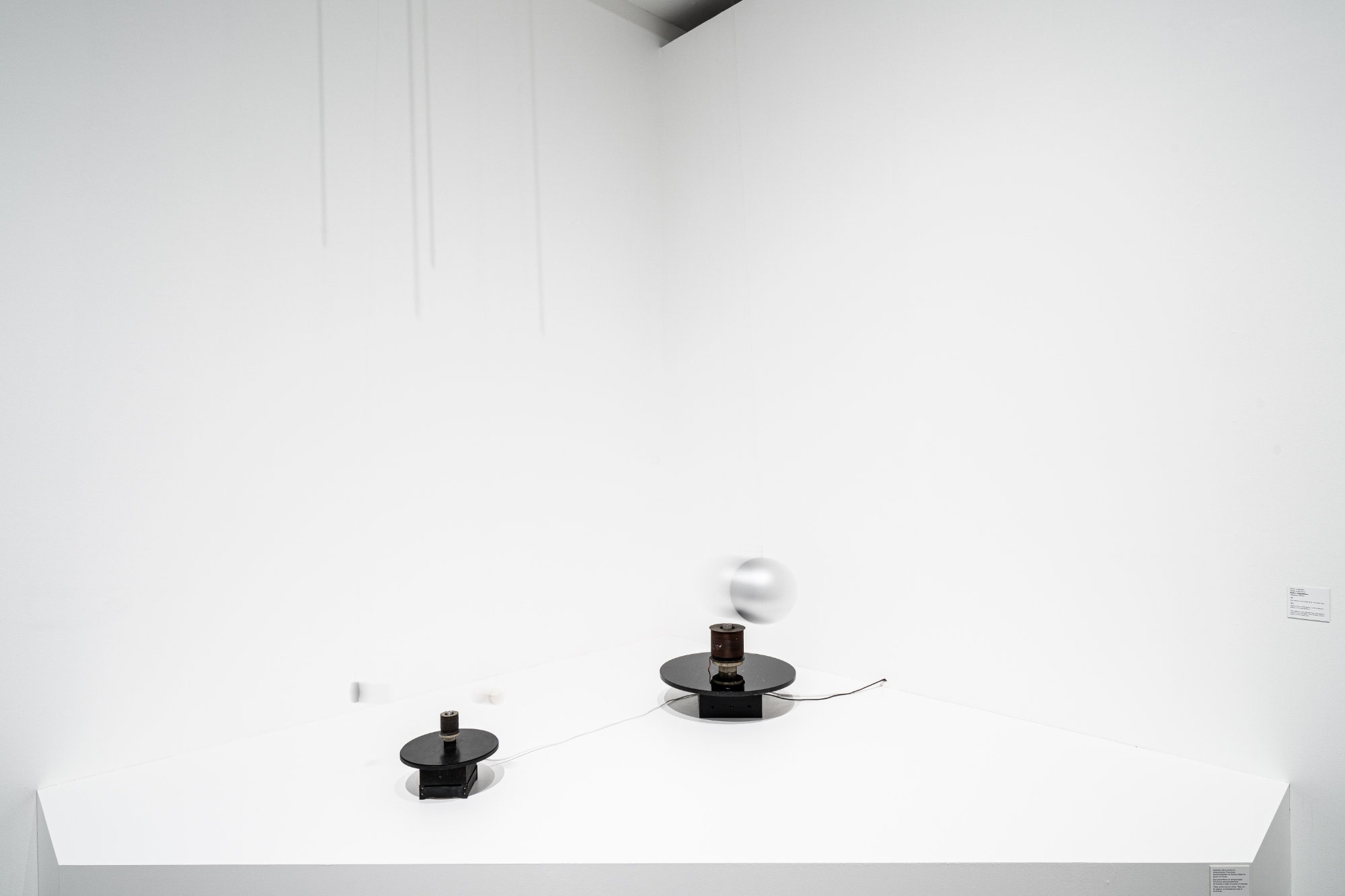 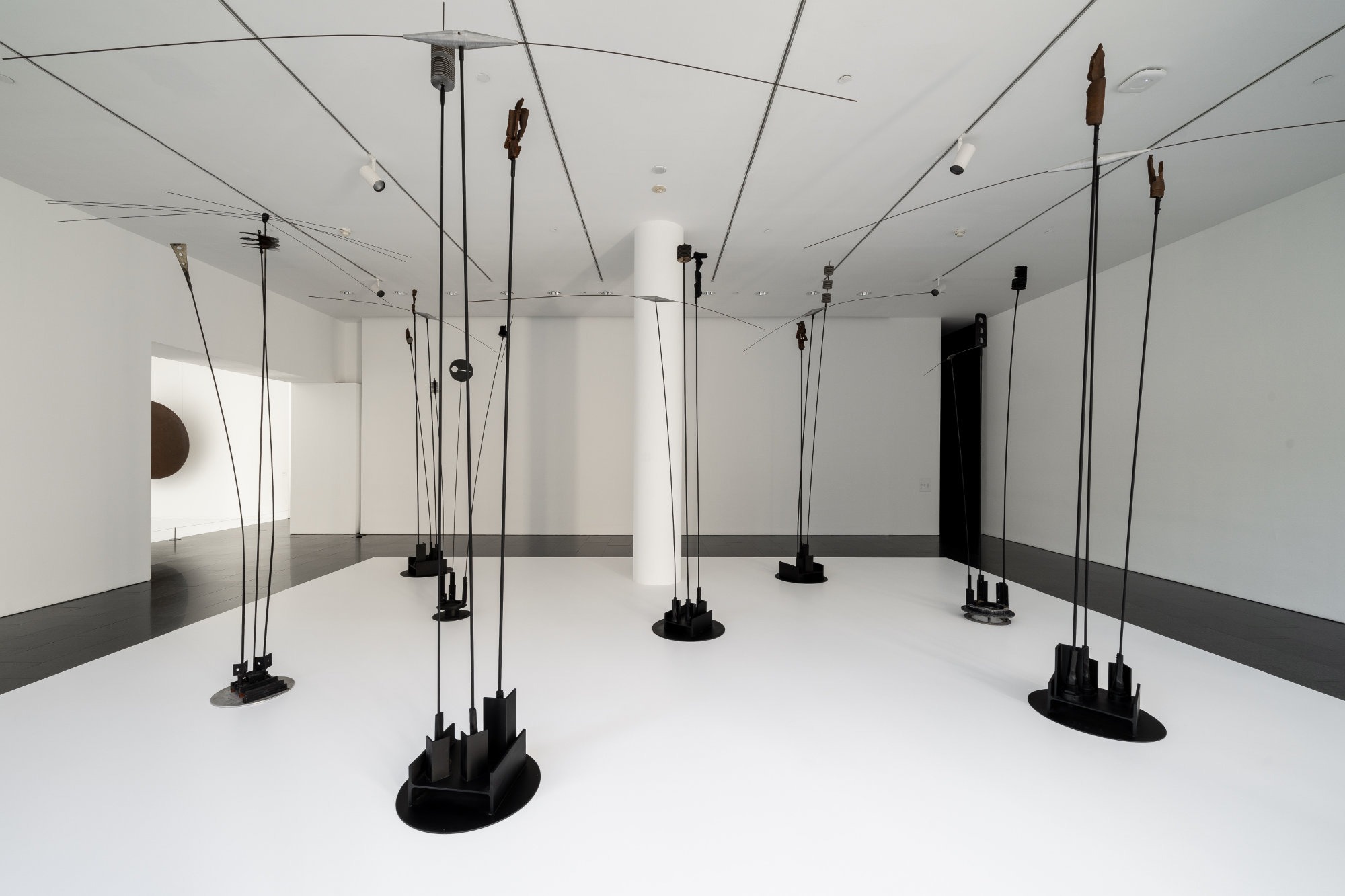 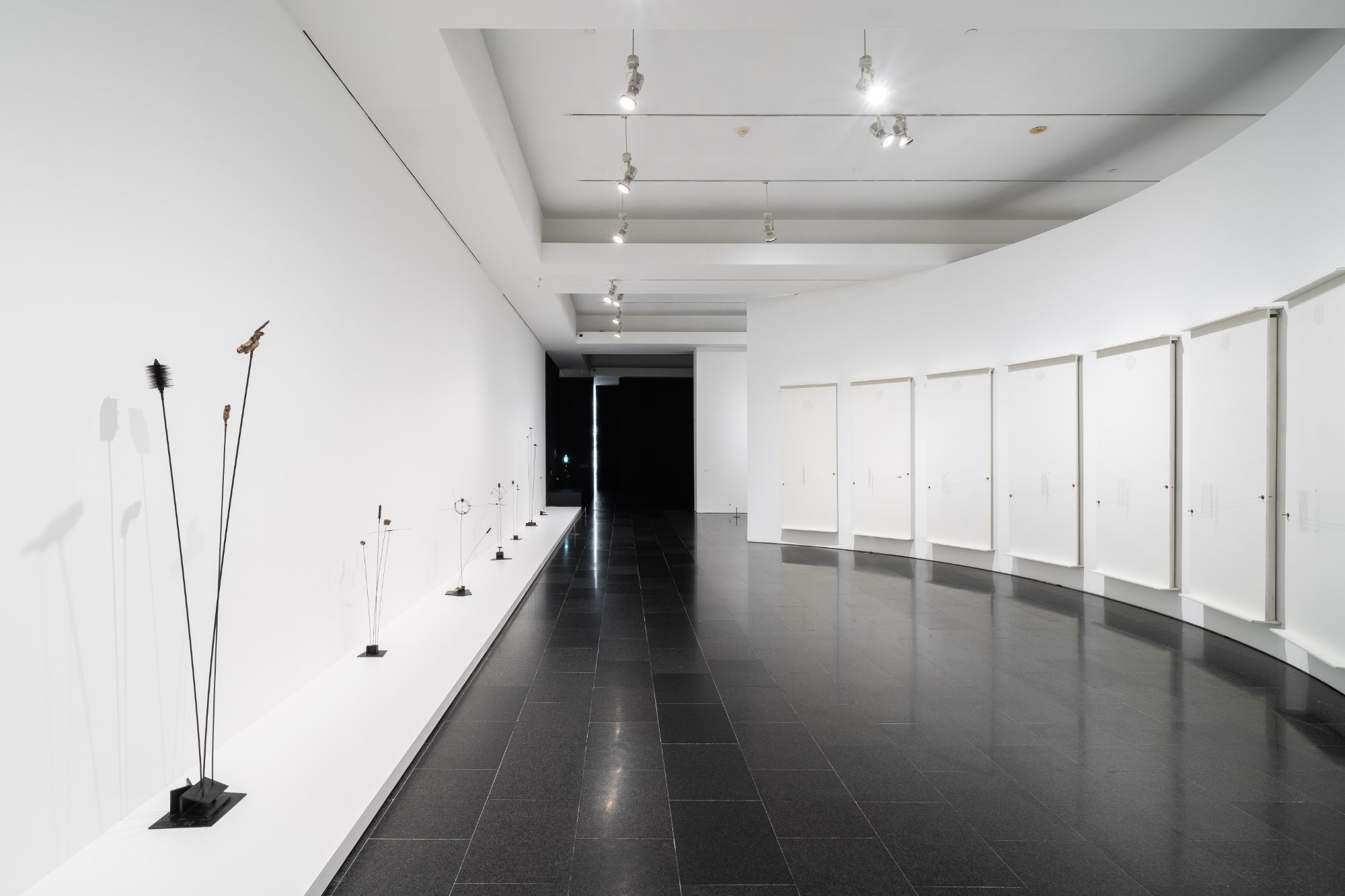 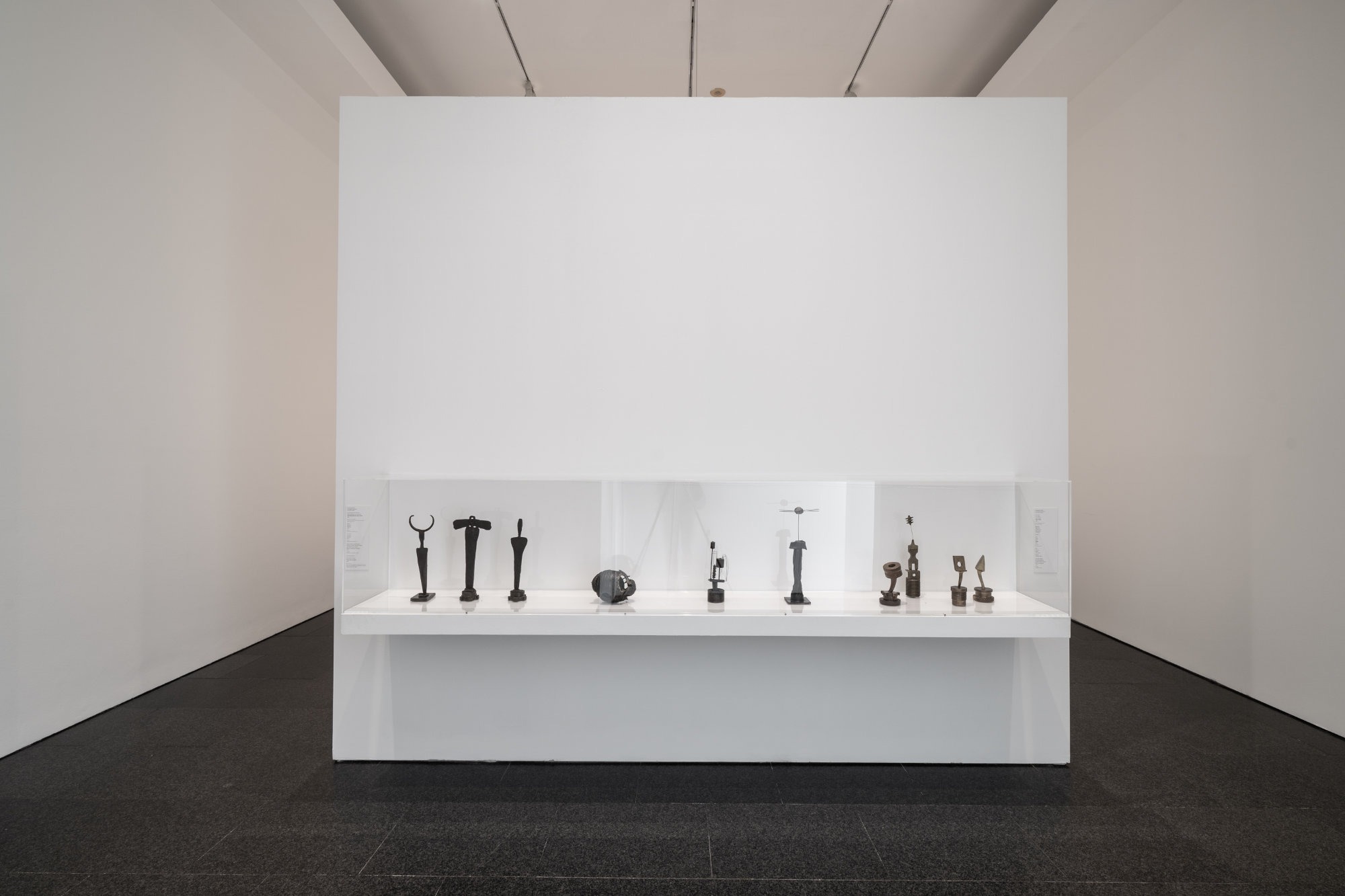 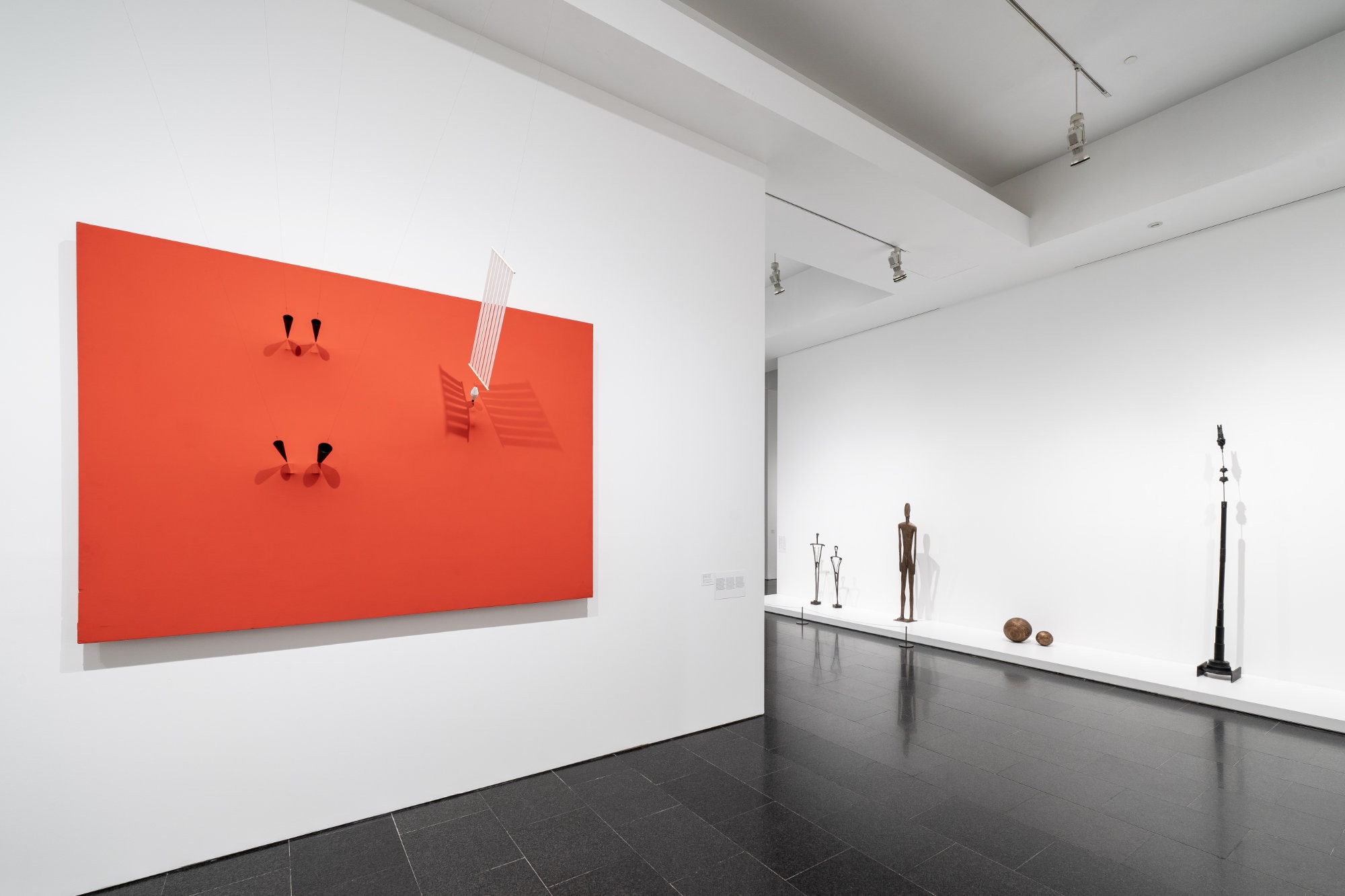 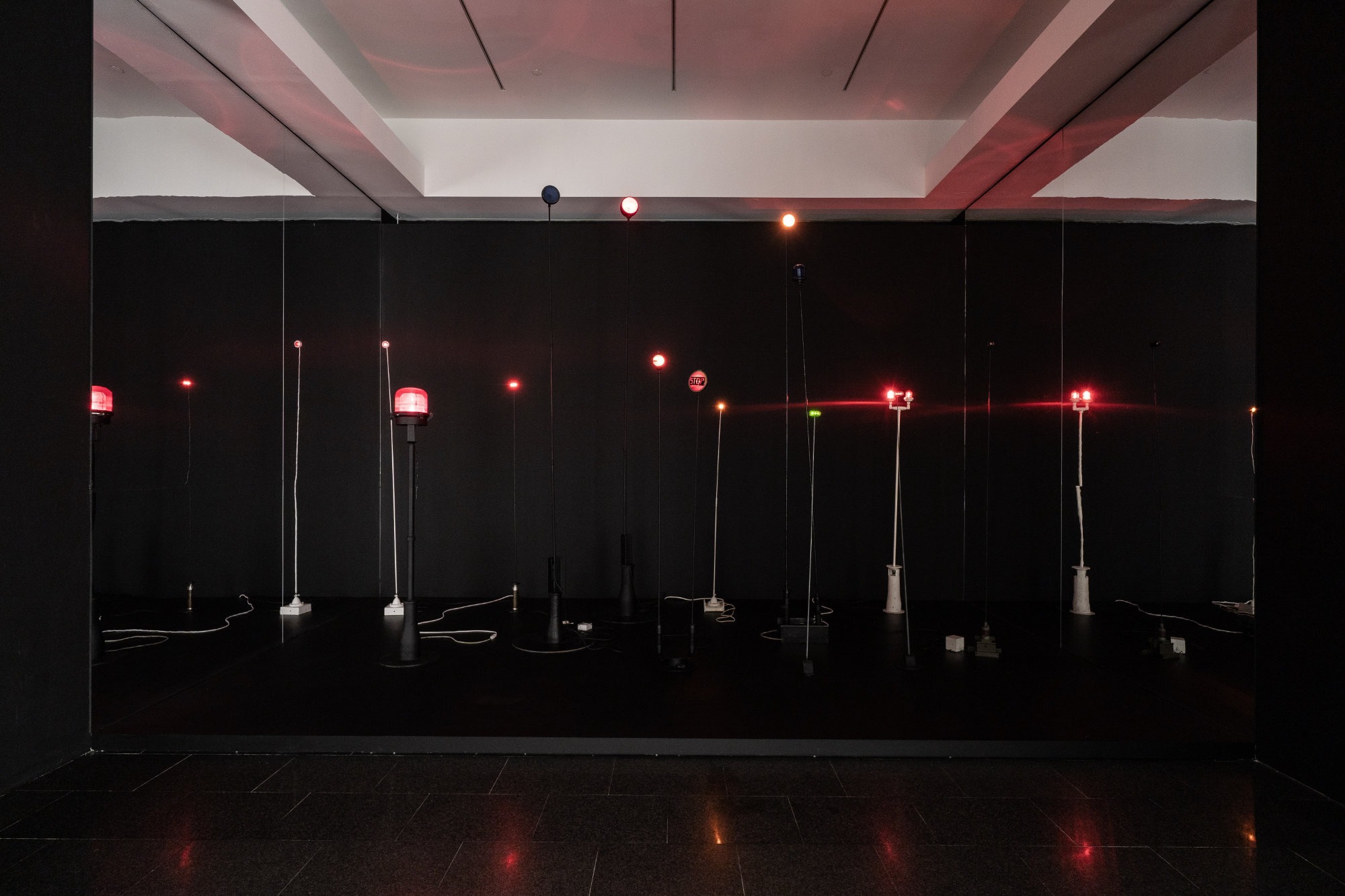 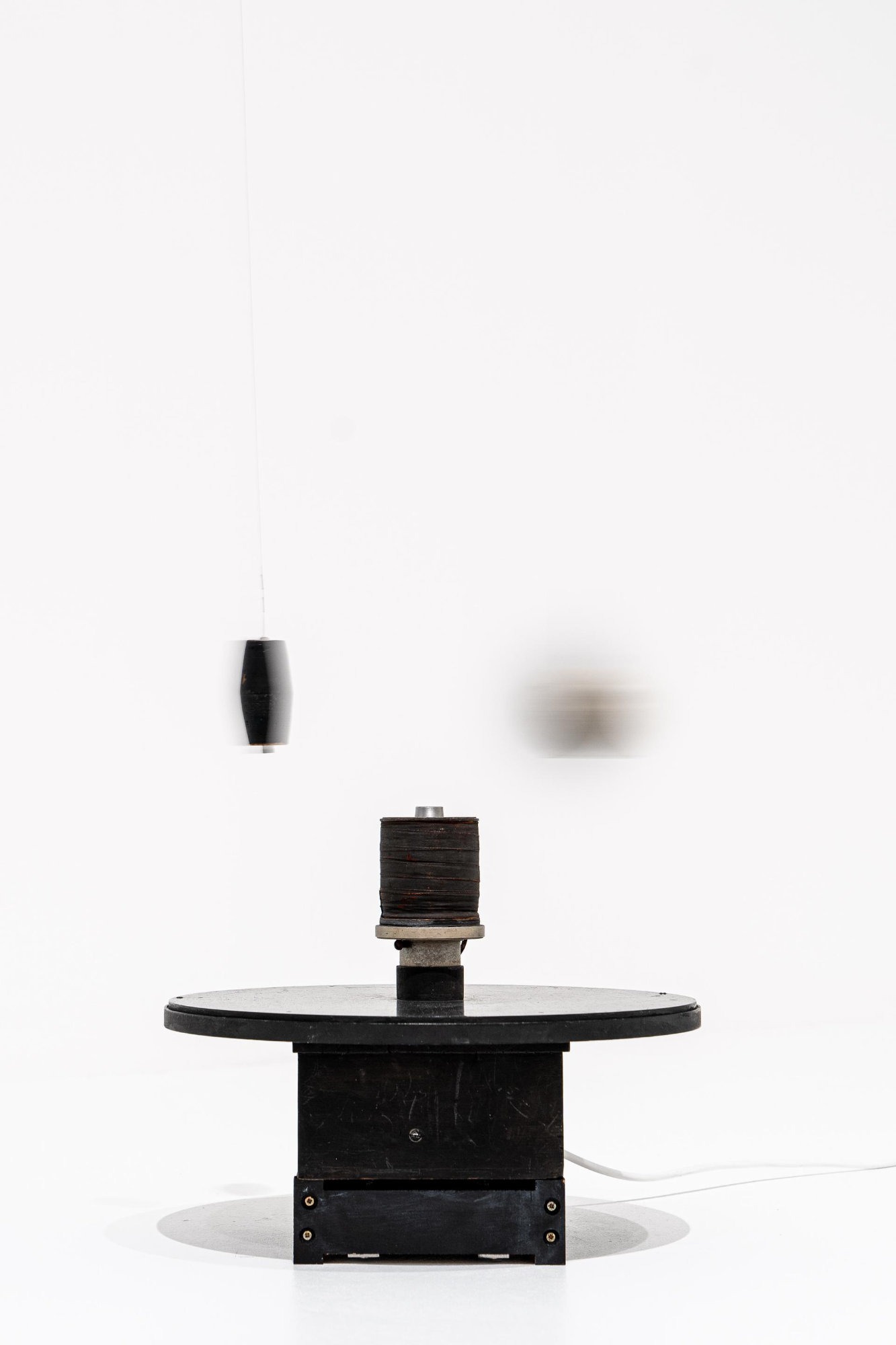 Takis, exhibition views at MACBA, Barcelona, 2019, photo: Miquel Coll
The Greek artist Takis (Panagiotis Vassilakis; 25.10.1925-9.08.2019) pioneered new art forms using magnetism, light and sound. Takis was born in Athens in 1925, where he died on August 9, 2019. Much of his artistic career and activity was focused in Paris, London and New York, between 1950 and 1970, and then he has been living in Athens. This exhibition is the first solo presentation of his work in Barcelona.

Over a 70-year career, Takis has created some of the most powerful, innovative – as well as playful – works of twentieth-century art. With these, he reinvented the formats of sculpture, painting and music in relation to energy. Takis was one of the pioneers of advanced, experimental art of the 1960s and in particular, his work investigated the relation between artistic, scientific and philosophical research. While his earliest sculptures make explicit reference to ancient Greek culture, he later became an innovator in incorporating natural forces into his work, most centrally magnetism, light 3 and electricity, in sculptures and paintings as well as in actions. Similarly, he moved from figuration to work that was more closely allied to experimental abstraction.

Among his most significant contributions, are the sculptures he called Signals, inspired by railway signals and often displaying flashing lights, and the tele-magnetic sculptures, which were begun at the end of the fifties and first exhibited at Galerie Iris Clert in Paris, involving metal objects suspended in space by means of magnets. In 1964, his work was the source of the name for the gallery Signals London; in 1968 he was among the first artists invited to the Center for Advanced Visual Studies, founded by György Kepes at MIT; and in 1969, his removal of one of his works of art from the Museum of Modern Art in New York was the catalyst for the creation of the activist group, the Art Workers Coalition. Sound, light, electrical and magnetic energy are the main elements of a rich and very personal language, which is presented through a selection of the most significant works of his trajectory.

This exhibition seeks out the essential poetry and beauty of the electro-magnetic universe explored by an artist, who was interested in making the viewer recognise the power of the invisible forces that animate the world. Embracing technology, Takis used industrial debris and scientific technologies in his work, which he invested with an existential meaning. Throughout his career, he produced the antenna-like Signals that could be imagined to be receiving and transmitting messages of far-off, cosmic events, and musical devices using magnets, electricity and viewer participation to generate resonant and random sounds. Such inventions earned Takis the admiration of the international avant-garde, ranging from the American Beat poets to artists such as Marcel Duchamp.

At MACBA visitors will encounter forests of Signal sculptures, works incorporating salvaged aircraft dials and magnetic objects inspired by radar. The sounds of Takis’s Musicales, his slow-moving Silver Musical Sphere and his Gong will complete the presentation. The exhibition in Barcelona also includes an important documentation section with the relation between Takis and Signals, MIT, AWC, among others.