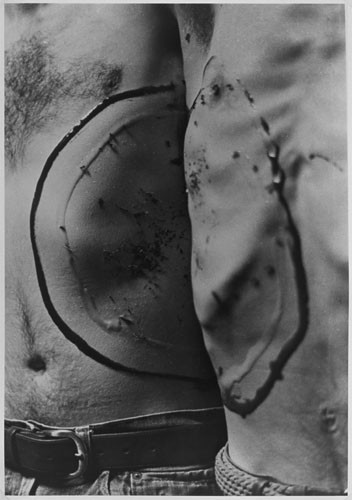 This transnational platform was set up in order to share the collections of its five member institutions in order to collectively challenge the dominant narratives in art history and the common canons that have been established for western art and to question the phenomena of inclusion and exclusion that take place within the unified territory of Europe. To this end, the partners will each present different exhibitions devoted to the development and reception of postwar art with the aim of generating awareness about the real construction of time through the works, about concepts of the place, identity and the political and economic context. The International also seeks to encourage the formulation of a new vocabulary and a new chronology to rewrite the history of contemporary art from contexts outside those established by common canons.

La exhibition presented by MACBA is the first organised by L’Internationale since the initiative was first launched in June 2009. It features around one hundred works by key artists from the collection of the Moderna Galerija in Ljubljana (Marina Abramović, Gorgona, Ion Grigorescu, Sanja Iveković and IRWIN, amongst many others), which has acquired more than 20,000 works since it was established in the 1990s. This is one of the most important collections of artworks produced in Eastern European countries since the 1960s. Geopolitically located on the border between the “two “Europes”, the Moderna Galerija Collection seeks to transcend the traditional isolation of countries from each other and to establish a dialogue between art from the east and the west. Later, in autumn 2011, the MACBA Collection will be presented at the Moderna Galerija of Ljubljana as part of a more ambitious exhibition project. Parallel to this, L’Internationale is organising a series of conferences and seminars in cooperation with the MACBA Independent Studies Programme (PEI). As part of this initiative, a conference took place in Vienna in May 2010, and this was followed by seminars in Bratislava and Barcelona, in October and December respectively. Finally, Warsaw will host another seminar in this series in February 2011.