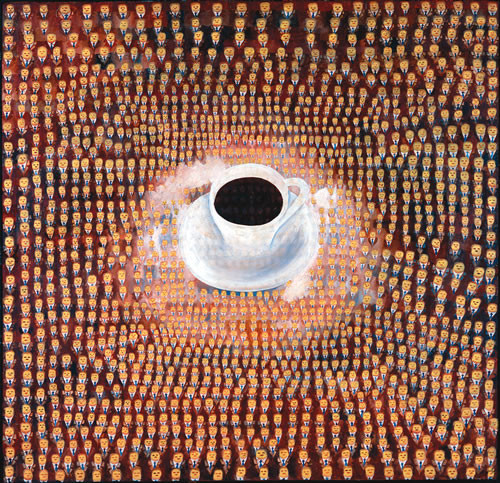 Thomas Bayrle (Berlin, 1937) is considered one of the leading representatives of the reception of the Pop movement in Germany. Active since the late sixties, his work explores how the process of production, repetition and reading of an image is linked to a certain assumption of the Modern project, at the same time as it highlights the latter's difficulties in coping with two of the fundamental concepts of today's society: the notions of difference and error.

Using a highly diverse range of mediums including prints on paper, models, sculptures and films, the work of Thomas Bayrle interprets a theory into images portraying the difference between receiving and consuming an image. From Mao to La Vaca que Ríe and including motorways, airports, telephones and food cans, anything can become a versatile material with possibilities of appearing in a thousand different ways in his graphic artwork, his collages, or in one of his many films. The relationship between industrial reproduction and an insatiable, somewhat mystical, repetitive vibration appears in the work as a method of the real as a resource with which to explore our relationship with tradition, with what we already know, while at the same time producing the possibility of error, the fortuitous, all that, strangely, escapes the desire for everything to stay the same as before, entropically.

In Bayrle's work questions of memory and the mechanisms of representation constitute the keys to the construction of the present and, by extension, determine our vision of the future. Under the influence of Pop art and concrete poetry, to name but a few affiliations, his work maintains confidence in the possibility of a specific subjectivity brought about by a concrete historicity, while at the same time subject to the variables imposed by the conception of the world as a social, political and aesthetic substance in constant expansion.

The importance of formulating a new phenomenology of the experience of historical time is the core of Thomas Bayrle's work, as well as of this project, especially created for the MACBA. This is a fundamental subject in the context of an institution in which the interest in the temporary, in the history of art and the collective memory coexist with the desire to maintain the currency of a commitment to understand and seize the meaning of living in and from the present. Bayrle's work unfolds from what we could call a "conceptual enthusiasm": the belief that the real can be as susceptible to being mythified as the mythical is to generating strong effects of reality. In this sense the exhibition, a retrospective (the first in a museum in Spain), should be considered as the effect of a production in constant expansion.
www.macba.es