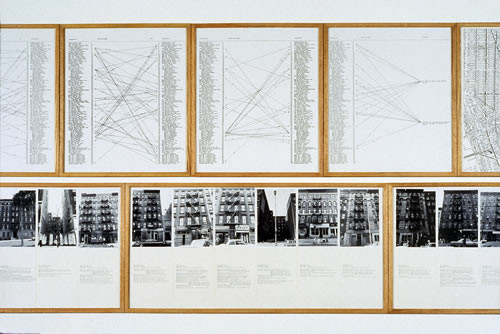 With a view to showing the works acquired by the MACBA Collection in the last two years, as yet unseen in that context, the Barcelona Museum of Contemporary Art will devote all of its exhibition space to its collections: the three floors of the Museum, the Capella dels Àngels and the exhibition hall in the Studies and Documentation Centre. The MACBA Collection has not been shown in its entirety since 2005, when some 160 works tracing a chronological reading of the Museum's own collections from the nineteen-fifties to the present day were exhibited on its three floors. Now, the Meyer building joins the two new spaces incorporated in recent years: the Capella (September 2006) and the Documentation Centre (December 2007).

Outstanding among the new works acquired by the Collection which will be shown in the exhibition is a key piece in recent art history: Shapolsky et al. Manhattan Real Estate Holdings, a Real-Time Social System, as of May 1, 1971, by Hans Haacke, acquired jointly with the Whitney Museum of American Art, New York. With this new addition, the MACBA initiates a new system of joint acquisitions and common policies with other institutions. Moreover, the exhibition will bring together significant groups of works by Pablo Palazuelo and Gego, deposited in the MACBA by the Pablo Palazuelo Foundation of Madrid and the Gego Foundation, in Caracas.
Important donations will also be included, such as that made by León Ferrari, who has presented the MACBA with five works from the eighties which were exhibited at the 2007 Documenta exhibition in Kassel, as were the magnificent photographic murals Shipwreckand Workers (2005-07), a donation from Alan Sekula.

The exhibition will also feature presentation of the priority lines of interest and research at the MACBA in this new stage, initiated in 2008. While over recent years the Collection has started to gather together documents that function as works of art (Grup de Treball, Tucumán Arde (Tucuman is Burning), works by collectives of artists and activists and so on), this has not implied forgoing the collection of great works by significant artists of our time. Alongside the abundance of fragments, it is important to consolidate nuclei of singular and complementary works that can express discourses on the nature of artistic creation and the historical moment in which we live. The MACBA is ideally placed to build a collection which explains the passing from the 20th to the 21st century, which begins with formulations of the final utopias of the last century and speaks of its crises, and then follows the present century, with its complexities and contradictions.