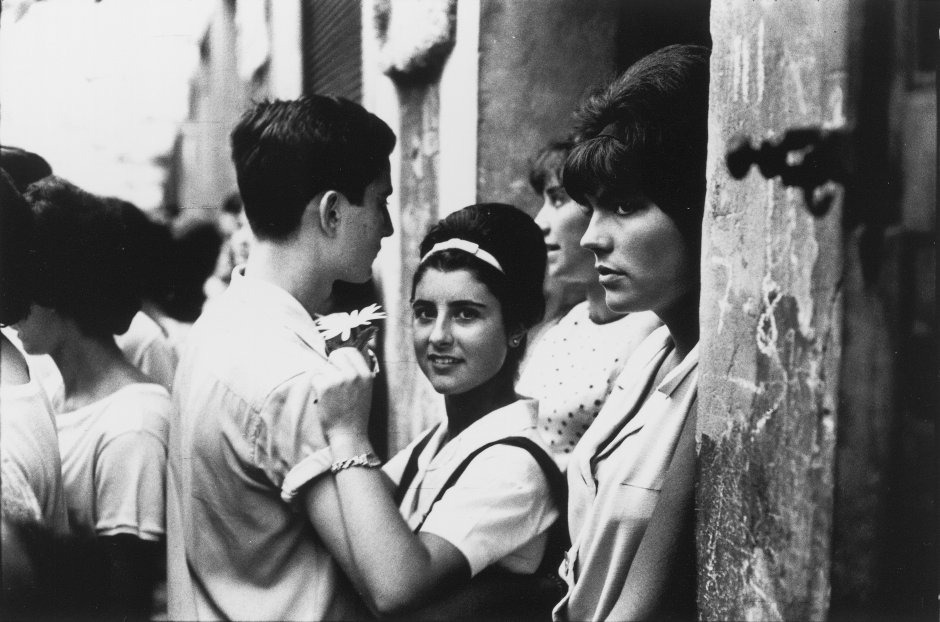 Miserachs Barcelona presents an exciting journey through time, an adventure in which the phantasmagorical character of the photographs is sometimes pure archaeology and at other times the present day. In the exhibition the images of Barcelona, blanc i negre come alive, constantly changing like the continual transformative energy of the city and its people. As with the photobook, the exhibition Miserachs Barcelona presents urban experiences that are as fluid and instantaneous as the photos, forever incomplete and imperfect, yet retaining the ephemeral and resisting oblivion.

In September 1964 the photographer Xavier Miserachs, a native of Barcelona, published his major work, Barcelona, blanc i negre, a photobook bringing together nearly four hundred of his photographs. At the age of only 27, he was already a veteran photographer, a member of the Agrupació Fotogràfica de Catalunya (Photographic Association of Catalonia) since 1952, who had exhibited and won prizes as an amateur photographer. From 1961, Miserachs worked professionally in advertising, photojournalism and, above all, street photography, ‘the pleasure of wandering around trying to represent what to me seemed distinctive and significant about the place’.

Miserachs participated in some exhibitions, but believed the best place for photos was in the pages of magazines and books. He wanted to make ‘a strictly photographic book of free style and content’, composed of images forming a set that can be read and watched like a film or novel. That is a photobook, the model that at that time defined the history of photography, marked by the publication of masterpieces such as Life is Good & Good for You in New York by William Klein (1956) and The Americans by Robert Frank (1958).

Photobooks construct photography’s own story, distinct from that told by the market and by museums. A story closer to life than to art, where we don’t encounter photos in museums, but in advertisements, commercial brochures, family albums, magazines, photobooks and virtual clouds where computer files are stored. Luckily, as the concept of the artistic constantly changes, the best photobooks are increasingly considered artworks in their own right, for their unique combination of high and low culture, and their ability to build complex narratives in the manner of film or literature.

Barcelona, blanc i negre draws on two models. The first is a travelling exhibition initiated by the Museum of Modern Art in New York in 1955, The Family of Man. It was here that Miserachs realised his true vocation and discovered that the photography that is often called ‘humanistic’ and refers to abstract concepts can also serve to ‘tell, communicate, explain and increase the knowledge of others through our own experience’. The second is identified with the urban photobooks of William Klein, whom Miserachs admired for his ‘highly original way of portraying cities by focusing on the signs provided by their people and spaces’. In the pictures that follow ‘the Klein pattern’ (which dominates in Barcelona, blanc i negre) there is no theme, ‘nothing happens, the image seems taken at random’. The photos are not valid in themselves, as individual images, but only work in the context of the book, which demands that the active reader interpret in their own way these texts without words, these visual stories.

Barcelona, blanc i negre begins with a carefully disordered sequence that bursts into the city one morning. Later, you discover the city through its inhabitants, with stories of work and celebration, newly-arrived migrants and the bourgeoisie of good families, slums, the Gothic quarter and Eixample, shop windows, advertisements and grafitti... And always people in the streets, of all ages and classes.

The photobook seems to follow a classic maxim, often quoted by Manuel Vázquez Montalbán: ‘The city is its people.’ The architecture is just the scenario where the everyday life of people takes place. Miserachs avoids tourist and historical clichés. He avoids as much as possible the typical motifs, preferring to delve into the theme of modern culture, the urban experience and its space, the city.

The great narratives of literature, film and photography of the last century are urban, and their heroes are waylaid walkers such as Eugène Atget, the pioneer of street photography, the active equivalent of the flâneur described by Charles Baudelaire and studied by Walter Benjamin. Like ‘the painter of modern life’ of the Parisian poet, Miserachs is a curious passerby, an indefatigable pedestrian who walks the streets, markets and parks, browsing in shop windows and pavement cafes, stopping by the factories at knocking-off time and in station waiting rooms, and who ends the day on the dance floors and in the night bars.

Photobooks invite us to look and read. To adapt these actions to the museum, the exhibition Miserachs Barcelona proposes several ways of looking at and reading photos in the art space, the abstract and cold white cube of the museum. On this occasion there are no frames containing photographic prints, the older the better, the conventional format of museum photographic displays. Photography is a mechanical means that has been reproduced in many different media, beginning with the metal plates of the nineteenth-century daguerreotypes and ending, for the time being, with transparencies backlit by today’s technological devices.

In Miserachs Barcelona, the viewer encounters the photos of Barcelona, blanc i negre arranged in the form of large murals, shop-windows, enlargements and projections. It opens with a twilight panorama, both unreal and documentary, that refers to the distant horizons of the cinema. Next, you enter the city, recreated in a Meccano-like construction that evokes the style of exhibition displays during the years in which Miserachs prepared his photobook. It is a model that began in the lecture halls of the Bauhaus and reached its photographic zenith with the portable structures used for The Family of Man. Later, you can literally walk through the pages of Miserachs’ photobook and the crowded streets and squares of a Barcelona without tourists, thanks to large three-dimensional enlargements that transform the space into a stage design in which the viewer becomes an active participant. A further space is dominated by changing projections, in which the viewer is immersed in a past and present that constantly merge. Finally, Barcelona, blanc i negre is displayed on a screen in full detail. Here we also find copies of the photobook and the meandering itineraries followed by Miserachs during its preparation.