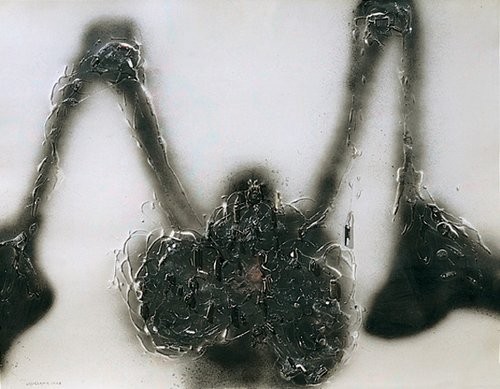 What a pity, dear children (and what horrors you missed, you
youngsters), that you never saw your grandfather, with his cobbler's
chest, tremble and rave, as if tombe', en enfance, kissing the doctors'
hands:
and as for his last
words, it wasn't him who pronounced them, but Carol, on the telephone,
talking about her by now comatose mother, when she said she was a woman
of such exquisite politeness:
and when she then added: good manners are all"
- Eduardo Sanguineti, Sept. 1972

Maccarone Gallery proudly announces an exhibition of seminal works by CAROL RAMA, on view October 25th - December 20th, 2008.
The self-taught artist's current presentation encompasses practices ranging from figurative drawings confronting sexual identity to intense abstractions and collage. With works spanning the years 1943 - 2005, much of the iconography found in Rama's first compositions lingers in her most recent. Sharing numerous qualities with the Surrealists or those of Arte Povera, Rama always remains far too outside the periphery to be wholly absorbed into any one subscribed ideology. The result is a life's work as veritable innovator, never succumbing to one style, yet always depicting a concrete narrative.
In Italy (where Rama has resided most of her life), her early career began controversially, wrought with depictions of salacious scenes charged with erotic symbolism, as posed in Dorina (1943). Assuming this radical taboo-breaking position within the rigid sociopolitical environment that enveloped 1940's Italy, Rama soon strayed from this iconography into a more abstract realm, sparking a dialogue with Movimento per l'Arte Concreta (MAC) concurrently ensuing in Milan.
The artist's conversion to this monochromatic abstraction amends in the 1950's. Moving away from margins of MAC, these works known as bricolage reinstate discerning self-narrative via body-specific materials; animal claws, strips of torn tires, glass doll eyes, fur or stilettos all are tossed into the tactile mix. In the artist's hands, these industrial world relics remain devoid of any potential nostalgic weakness. As viewers we confront an everlasting restitution of the object, recognizing defective symbols of man's history with an assigned value of use and implied emotion: Rama always leaves us with the impression that an object has lived.
In the most recent work Rama revisits her early subject matter with a sense of energized irony and expands into the environment of contemporary society as evidenced through series like 2001's La Mucca Pazza (The Mad Cow). Once more exploring iconographic self-awareness, the artist explains, "I like the cow because it's mad... so it has some remarkable similarities to us...for me these are extraordinary self-portraits." The narrative Rama has told throughout the various stages of her career, virtually calls us all to feel mired in her natural terrain. Disintegration and transformation always linger at the heart of the story. The extensive itinerary she has traveled in an effort to unearth the forms of her beginnings attest to Rama's irrefutably unrivaled singular position among artists spanning generations, both past and present.
CAROL RAMA was born in Turino, Italy in 1918. In June 2003 she was awarded the Golden Lion for Lifetime Achievement on the occasion of the fiftieth Venice Biennale. Survey exhibitions of her work include Palazzo Ducale (Genoa, 2008), The Sandretto Re Rebaudengo Foundation (Turino, 2004), The City Museum of Ulm (Germany) and The Galerie im Taxispalais in Innsbruck (Austria) (2004).
The exhibition has been organized in cooperation with Franco Masoero and Alexandra Wetzel, Gallery Franco Masoero, Turin, and will be accompanied by a full-color catalog published later this year. For further information, please contact maccarone, 212 431 4977.
www.maccarone.net