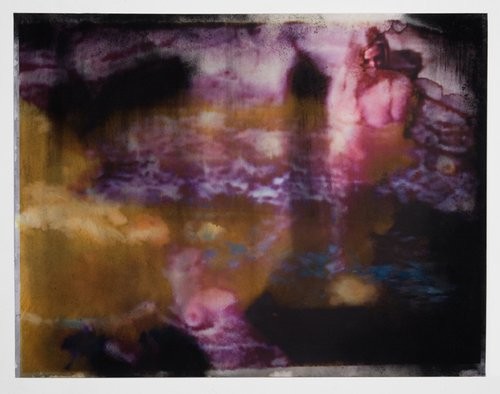 © Kaari Upson
KAARI UPSON
"I am bound to have some anxiety about this so please if I say stop, don't stop"

There is a man at the center of a story. He is a character created from real information and forensic methods traced and described by a narrator, a woman, who is a persona of a self, playing the role of his obsessed lover in a self-reflexive fantasy. He seems to embody all the clichés of a former time she has never known. This woman becomes a detective, sleuthing out all the details of the object of her desire, a man she has never met. The story subverts further as the woman begins to intertwine their lives.

This woman as the narrator is similarly as mutable as her story: investigator, artist, lover, psychoanalyst, historian, and at times, even assumes the voice of the man. This man and woman, this "couple" is a figment of the woman's creative device. Her intention is to merge with this man, using various artistic conceits, routed in performances utilizing the man's "surrogate" as a sexualized partner, making that surrogate the subject of videos. Revealing the obsessive conjoining between the man and the woman, she paints portraits of the two - she and he on separate panels, and while the heavy paint is still wet, they are pressed together and "kiss", then separated to reveal two blurred faces. The objective reality of the man she constructs collapses into this created subjective fiction, until they merge, and she is more him than he.

The story's second part plays out in a structure the woman has built. In this shrine, she interprets a mythical and infamous grotto she has never been to, privately videotaping performances unraveling a psychological progress. As the man and woman have now merged as one, the woman embarks on another relationship - the doubling of her own coupling. The act of love between the created self(the woman) and the merged self(the couple) plays out through the video series shot within this lovingly assembled set. Now projected within that same space, the blurring of the overlapping images and sounds takes the original man as protagonist, burying him beneath the new surrogate - a subject that is naked, and adorned with female perfection. The woman desires a self who is more fragmented and abstracted, a projected self. The sexualized roles are only revealed to a voyeur through cracks and peepholes, giving clues that there is a depraved love story which debases the traditional heterosexual male gaze upon the woman's body. In fact, the action and recorded action shows the man is gone - the woman uses the tropes of male fantasies to destroy the erotic narrative that one would expect in this womblike space of distortion. The woman further activates and overlaps the story, mutating photographs into drawings, merging the planes of portrait and landscape.

The subject, the fused male/female surrogate of these performance-driven videos, emerges one final time, a last incarnation of the coupling. It is a body cast, a doll made of charcoal, charred en route to its final death, ending in the rubbing out of this body, captured on film. Its erasure and annihilation is only evident via markings and dust. The man, once s a physical substitute now exists in a space of representation. The doll's dust imbeds itself on all the surfaces for which it comes into contact. The story is undone - what remains is a smoke vapor, a memorial, this relationship's ghost - one enters through the end, making their way backward through the layers, experiencing the story as though it was a memory.