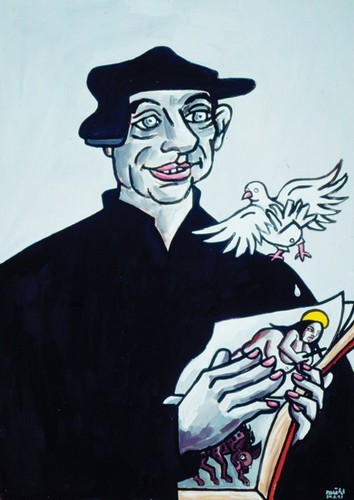 Otto Muehl is primarily known in the US for films and photographs of his 1960s' actions in which he attacked abstract painting and the picture surface. Over a period of ten years, from around 1961 to the early 1970s, we observe in his work a struggle to find innovative visual forms that also create a relevant socio-political statement. This neo-avant-garde phase of Vienna Actionism attempted to rehabilitate human depiction by emphasizing the political significance of the body. This view takes on a new significance and power in the performances of Muehl and the other Actionists, never before formulating an art practice of such radicality. Yet around 1970, this iconoclastic approach transforms before the backdrop of a fundamental reorientation. Temple Destroyer, on view at maccarone, exhibits works from several series that essentially conform to the 1960s slogan of Muehl's "destroyed picture", yielding less of a direct attack against the picture itself and more upon an entire art system.
At issue was not much a basic questioning of the pictorials' possibilities but rather the prospect of analyzing and expanding an artwork's position as activist tool - redefining and exploring its social functions, as well as those of the artist. This is all the more apparent when considering the artworks that Muehl, parallel to the actions and action films, continued to produce throughout the 1960s: the collages of the years 1965-66, the painted "media quotes" from the series Persönlichkeiten (1967- 1978), and the series 12 Aktionen (1970-2), through which he ultimately, and once again, came to enjoy painting.
Evidenced via Muehl's immensely prolific practice oscillating among varying themes and styles, the artist revises his role of painter, consequently breaking free from the concept of avant-garde high art, assigning both painting and drawing a quite particular, close-to-life role within the closed Aktionsanalytische Kommune society he founded during this period. Indeed, the role of the body, its potential for liberation and sexual emancipation stand at the core of the artist's visual world. In a certain sense, Muehl becomes the archivist of the self-presentation sessions carried out regularly in the group, where highest value was placed upon individual freedom of expression. The significance of movement, gesture, acting-out and play remain central to these group dynamics experiments, thus becoming a leitmotif in his artistic work from the time of Kommune Friedrichshof until today.
Concentrating on mostly iconographical work that harkens to explicit political and sexual themes, Temple Destroyer is wrought with subject matter revealing the artist's extremist views on society as a whole. For Muehl, the utilization of the sexually explicit was, and is still, a means to mimic the perversity he has found within a lifetime confronted by the paradigms and rituals of politics and religion, operating in a childlike state endowed with recognizing the world's contradictions and inconsistencies, thereby using them for his own ends 1.
Otto Muehl was born in Grodnau, Austria in 1925. Major retrospective exhibitions include "Otto Muehl Summlung Hummel", MUMOK, Vienna (2006) and "Jenseits von Zucht und Ordnung: 1960-2005", Kultursftung Phoenix Art, Falckenberg Collection, Hamburg (2005) as well as solo exhibitions at MC Kunst, Los Angeles (2006), "Otto Muehl Leben/Kunst/Werk", MAK Museum, Vienna (2004), and "Otto Muehl: 7, MAK Museum, Vienna" (1998). Recent group exhibitions include" Out of Europe", The Museum of Modern Art (2006), "Of Mice and Men: The Fourth Berlin Biennial" (2005) and "Le peinture comme crime", Musee du Louvres, Paris (2001). The artist currently lives and works in Algarve, Portugal.

1) Harald Falckenberg. "Otto Muhl. Beyond Discipline and Order. The Story of People Who Refuse to Grow Up. At the Same Time Being a Contribution to an Improved Understanding of Central Europe", in Otto MÃ1⁄4hl. Retrospktive (Revolver, 2005) p.206.