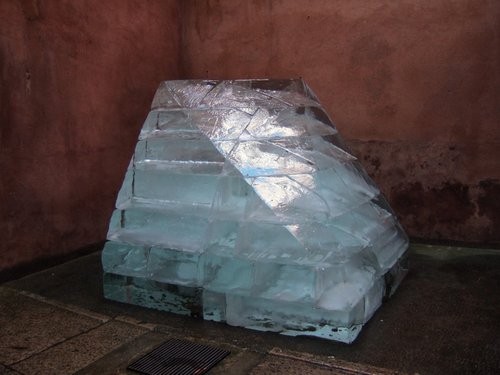 In 1987, after a series of meetings and conversations, macLYON invited Olivier Mosset to exhibit his new works. In a way, this decision was triggered by his exhibition in Geneva (Centre d’Art Contemporain, 27 January–15 March 1986), for which the artist had conceived a set of paintings featuring geometrical motifs that seemed to elude the question of the monochrome and offer a humorous, lively examination of abstract painting.
For the 800 square-metre space assigned to him in Lyon, Mosset devised a new project that was a mix of humour and provocation, featuring specially created paintings all based on the superposition of two colours. The Museum, known in those days as Saint Pierre Art Contemporain, acted as producer of these pieces. Held from 13 March to 4 May 1987, the exhibition featured A Step Backwards (1986), Duster (1987), Caprice (1987), Trésor Public (1987), Escort (1987), Estate (1987), Skylark (1987), Bob’s Kitchen (1987), Sun City (1987) and Carré bleu sur fond blanc (1987).
This show in Lyon was important. Not only was it the artist’s first museum exhibition on this scale, but it saw him invent a new critical protocol for his art, while radicalising (and inflecting) what he had done in the Geneva exhibition. And, as always with Mosset, an artist who is careful to keep form from lapsing into formalism, the rule came with its exception, embodied by A Step Backwards. For not only did this work predate Mosset’s new self-imposed convention, but it was not made by superimposing two colours. However, it did serve as a bridge between his “constructed paintings” and the monochromes. The other works oscillated between single colours and the superposition of two colours.
After the exhibition, the following works entered the macLYON collection: Caprice, Escort, Estate, Skylark, Carré bleu sur fond blanc and A Step Backwards.
After the 2003 Lyon Biennale (It Happened Tomorrow), Olivier Mosset donated his work Cimaise - sculpture en cinq éléments (1993) to macLYON. At the Unlimited section of ArtBasel the following year, we witnessed the final melting of Toblerone, an ice sculpture in the form of the famous Swiss chocolate bar.
This was when we spoke to the artist about the question of subsets of his body of work and the kind of coherence that, in his eyes, unites the works in the collection, taken as these are from different series ( Bichromes, Cimaises and, finally, Toblerone, acquired in 2007).
Olivier Mosset’s answer was very simple. He proposed a canvas with, at its centre, a ring with an internal radius of 4.5 centimetres and an external radius of 7.8 centimetres, as in his works from the 1970s. However, this particular work had been painted by Hugo Pernet in 2007, and reversed the format of those earlier pieces: the circle was now white and the ground black, and the work was entitled Négatif. Mosset himself bought the work from the artist and donated it to the Museum.
The idea for 2010 is to see what changes when nothing changes, and to re-exhibit, in its entirety, the exhibition of 87. A step backwards squared, you might say.
www.mac-lyon.com