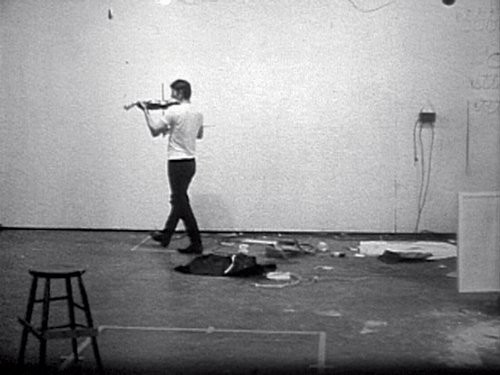 Bruce Nauman
Playing a note on the violin while I walk around the studio, 1967-1968
© Adagp Paris, 2010
COLLECTION: BRUCE NAUMAN'S WORKS

16 works from the Museum's collection are on display from September 11 to December 31, 2010. It reflects the continuity with which the Museum was interested in the work of Bruce Nauman in the prospect to constitute an exemplary set of works, such as those that have been made for Robert Morris, Marina Abramovic and Ulay, Francis Morellet, Jan Fabre, Sarkis, etc..
American artist Bruce Nauman is one of the outstanding figures in contemporary art.
For over 40 years he has been a major influence on new generations of artists. His films from the 1960s and 70s are among his most avant-garde works.

In 1989 macLYON acquired one of Nauman’s emblematic pieces, Good Boy Bad Boy (1985), and in 1992 it received Butt to Butt (Large) (1989) on permanent loan from the Fonds National d’Art Contemporain (FNAC). These major works remained isolated until 1997, when the Museum acquired Violin Tuned DEAD, Bouncing in the Corner #1, Bouncing in the Corner #2, and Revolving Upside Down. Then, in 2008, came an ensemble of 9 pieces including Art Make-Up and Slow Angle Walk (Beckett Walk). When ownership of the works from the FNAC was transferred in 2008 macLYON became the owner of Butt to Butt (Large) and of Setting a Good Corner, a work from 1999.
Consequently, the museum now holds 16 works by Bruce Nauman: a remarkable ensemble.
The investigation of the artistic act and artist’s physical and mental role inform Nauman’s work on a number of levels. In Art Make-Up a simple action – like all artistic actions – has unexpected consequences. By means of these elementary actions, performed in the studio and then filmed, following a procedure not unrelated to the activity of dancers such as Merce Cunningham and Meredith Monk, Nauman was able to explore the ways a body can intervene in space (notably in Slow Angle Walk [Becket Walk]), the limits to the pertinence of an action (Bouncing in the Corner #1, Stamping in the Studio), and even the nature of the body as the work’s raw material, as in Thighing (Blue) for example.
The systematic repetition that we find in Bouncing in the Corner #1, but also in pieces such as Violin Tuned DEAD and Playing a Note on the Violin while I Walk around the Studio, also afforded means of structuring time which varied in the different pieces, perhaps the most extreme example being Bouncing Two Balls between the Floor and Ceiling with Changing Rhythms, a work in which the structural principle shifts imperceptibly towards chaos.
Nauman is known to be interested in the work of John Cage and Samuel Beckett, but also that of La Monte Young and Terry Riley.