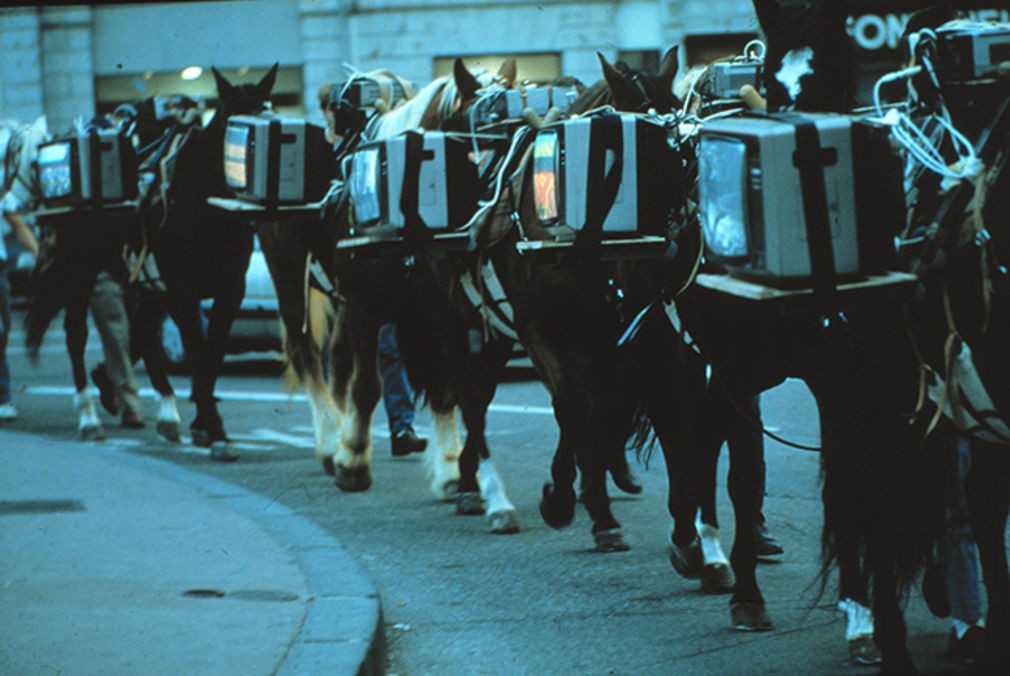 A look back at 10 years of vision and unparalleled energy: in the 1980s FRIGO was one of the most emblematic of Europe’s alternative culture groups. Lyon was the hub of this artistic effervescence.
The FRIGO Collective get their name from the cold room of the former Lyon cheese factory that hosted their activities in the 1980s. For 10 years, FRIGO boasted an intense artistic production across all fields: free radio (Bellevue 95.8), music, scenography, graphic design, installation and performance art, exhibitions, photography...

FRIGO exhibited a hundred cubic metres of water at the Centre Pompidou, succeeded in closing the Musée d’Art Moderne following a performance, launched a pirate TV station, refashioned TF1’s TV studios, wrote an obituary for the Théâtre National Populaire, rolled a stone weighing five tonnes to India, invited Michael Nyman to perform a private concert on-site; filmed Hermann Nitsch and Paul McCarthy, enjoyed Potlatch in Hamburg, and attended Documenta 8 and Ars Electronica in Linz, Austria. The collective ceased their activity in about 1989, around the time of the fall of the Berlin Wall and the inauguration of the Magiciens de la terre exhibition in Paris.

This fantastic true story can be discovered from the 8 March to the 9 July 2017 at the mac LYON.
A laboratory embracing a plurality of forms and disciplines, FRIGO was also at the origin of a very active international network bringing together visual artists, choreographers, poets, actors, writers and musicians, including ORLAN, Régine Chopinot, Benni Efrat, Mike Hentz, Dieter Appelt, Fabrizio Plessi, Marie-Christine Vernay...

It today serves as a remarkable audio-visual database or archive, housing a wealth of visual and audio information from this period.
www.mac-lyon.com