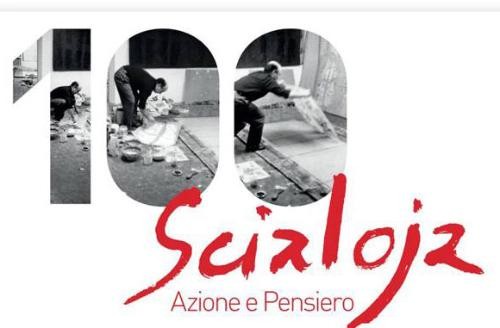 On the occasion of the Centenary of his birth (1914-2014), the Sovrintendenza Capitolina ai Beni Culturali, the Fine Arts Academy in Rome and the Fondazione Toti Scialoja organize an exhibition dedicated to one of the best Italian artist of the second half of the twentieth century, national and international, Toti Scialoja.

Some artorks by Scialoja during the early forties are exposed - small canvases with the obvious expressionist sensitivity, very close to the international soutiniana matrix and Roman tonal painting of the twenties-thirties - and the last of the unpublished large canvases of the late nineties, through the famous series of Footprints in the second half of the fifties, with the beginning of the adventure towards the "Action", as the artist himself defines it, in the period in which he is stylistically and emotionally attracted from abstract American expressionism.
After all is between the middle of the fifties and sixties that Scialoja often stays in the US, where will be able to consolidate an international notoriety, also tightening relations and friendship with the most important representatives of the American informal, as Mark Rothko, Willem de Kooning and Robert Motherwell.
As for the "Thinking" of Scialoja, in the main components of his artistic activity, this exhibition will privileged some aspects of his theatrical journey, with the analysis and the display of artworks about his important activity as stage and costume designer, since the forties.
It will be exhibited for the first time the " Macchina a pettine ", one of the five original stage machinery of Scialoja created for the work of Rosso di San Secondo, The Rape of Proserpina, staged in 1986 for the theater season of "Orestiadi di Gibellina ". On the occasion, the machine will be specially restored by the artisans of Gibellina that were its original creators, almost thirty years after the first performance, and re-painted by the students of the Fine Arts Academy in Rome, in an open yard sets directly at the MACRO.
The exhibition also explores the theme of writing and graphic for children, where remains high the syntactic and non-sense playing continually put in place by the artist. Precisely in this regard rhymes and illustrations of the artist dedicated to children will also be documented, thanks to the graphic autograph selection from four publications for children that Scialoja made in the seventies: Amato topino caro (1971), La zanzara senza zeta (1974), Una vespa! che spavento (1975), Ghiro ghiro tonto (1979). Preparatory drawings and watercolors are compared with the writing and the non-sense of Scialoja himself.
In the section about to the scenery several episodes of the television series RAI " Le fiabe dell'albero " (1974) and "Fantaghirò" (1975) will also broadcast. On the occasion, the Fine Arts Academy in Rome made a documentary dedicated to Scialoja.
www.museomacro.org