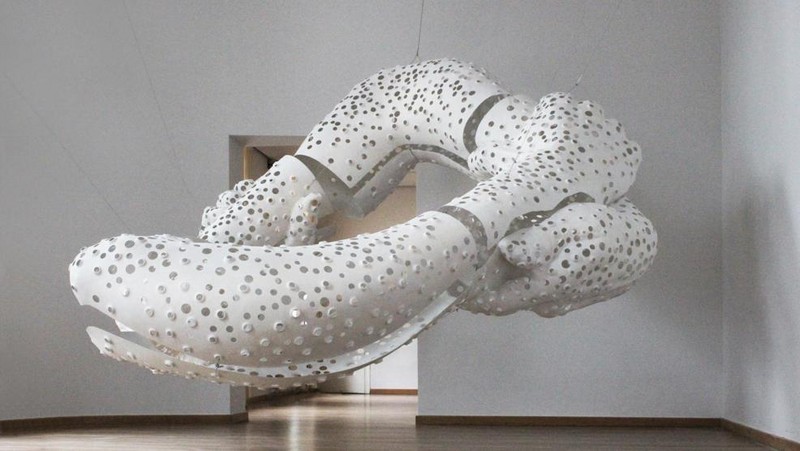 MACRO – Contemporary Art Museum Rome hosts the exhibition LIMITS by the spanish artist Amparo Sard. In her artistic research, focused on the theme of idendity, she uses various languages – drawing, photography, installation, video and lately also sculpture – that allow her to investigate the complex existential dynamics that affect human relationships.

She has become renowned thanks to the peculiar tecnique of needle piercing on paper. She works on sheets of white paper with a thin needle in order to draw shapes and volumes, creating a chiaroscuro effect that emerges as a bas relief from the surface. Sard composes her images in a very poetic, patient and obsessive way, bringing to life papers in which beauty, fragility, perfection and anxiety live together.
The pierced surface loses its consistency and becomes fragile, such as the human being when he faces his intimate fears or when he has to deal with the consequences of his actions.
Sard’s latest artworks focus especially on doubling and experiencing the limit between impetus and instinct and find their perfect way into sculpture. The new fiberglass pieces appear as artificial extension of a natural body: its severed limbs particularly provoke a sense of angst and play with the ambiguity of lifeless objects.

Amparo Sard has created a site specific selection of her artworks for MACRO, where she displays pierced papers, sculptures and videos.
LIMITS, that deals with the borders of the human being and his continuosly changing identity, is organized in three different sections.
The first one presents drawings made with needles and large works on paper – where the artist portraits herself, assembling and dismantling parts of her body as if they where clothes.
The second section hosts four videos: With water to the neck (2014), Second mistake (2008), The lifeguard (2012), Hauptpunkt (2013).
The third room presents the large fiberglass sculpture Limits, that gives the title to the exhibition. The sculpture, completely sprinkled with circular holes that project their outlines on the surrounging walls, evokes a circle made by a couple of arms that hug, twist, clutch one each other and at the same time look as if they are defending themselves and hurting one each other.

Amparo Sard (Palma de Mallorca, Spain, 1973) is one of the most influencial spanish artist in the contemporary art scene.
Many public and private collections include her artworks, that have also been acquired by some of the most important museums in USA and Spain, such as the MoMA in New York, the Guggenheim, Casa Solleric in Palma de Mallorca, the Murcia Museum of Contemporary Art and Museum ABC in Madrid.