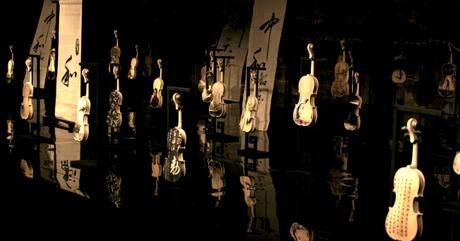 On this occasion, the exhibition project has been extended to OPEN International Exhibition of Sculptures and Installations, artistic platform in parallel to the Venice Cinema Festival, with the aim of enlarging the selection specifically to the wide-ranging installations.

Li Chevalier pursues an aesthetic research where the aesthetic is the value of things and reveals the truth of the world. It is marked by elegance and refinement of technique and installation. When Li Chevalier leaves Beijing for Paris, her art arrives in a new dimension where Chinese tradition is nourished by an exquisitely western context that never absorbs it completely, but simply skims over it, making it more articulated. Another constant interest in Li Chevalier’s life is music, which she has cultivated since the age of 15. She sang as a soprano in the Chorus of the Paris Orchestra directed by Arthur Oldham and Semyon Bychkov. She has worked over the years with the soloists of Paris Opera, and collaborated with the China National Symphony Orchestra under the direction of Philippe Jordan to a landmark event at the State Opera of China where the violin solo Fréderic Laroque gave an impromptu performance in front of her installation.

This passion for music gives her work a new expressive timbre. Among the most prominent exhibitions, Li Chevalier exhibited in major institutions such as the Royal Academy of Art London Summer Exhibition, the National Art Museum of China, the Shanghai Art Museum, the Today Art Museum, the National Library of China, The Sub-Marine Base Contemporary Art Centre Bordeaux France, the State Opera China.

Li Chevalier does not like borders. Neither those of disciplines, nor of traditions or schools. Multiple interlinkages in disciplines, aesthetic languages, filiations and origins, give to her works a particular vocation: on a pictural and philosophical trail, she leads the viewer through mysterious encounters towards a deep reflection on our systems of thought beyond any attempt at artistic hegemony. Her aesthetic concept of beauty questions the links that shape our intercultural dialogues. "...Only beauty can generate desire and its quest..." says Francois Cheng.

After 5 years of deep immersion in the Chinese Army’s operatic troupes as a singer, Li Chevalier discovers major European capitals, enthusiastically embracing the atmosphere of such mythical temples of art and knowledge as Sciences Po, Sorbonne University, various Florence and Venetian art institutions, London Central Saint Martins College of Art and Design, in quest of truth and beauty.

Li Chevalier claims to be profoundly contemporary but passionately refuses the dictates of aesthetic nihilism. Her works have a primordial character. No true feeling can arise from confrontation to an art work without the prism of aesthetic emotion.

According to François Cheng, "We could imagine a universe that would only be true, without the slightest idea of beauty touching it, it would be a universe only functional, or unfolded, uniform elements, which would move in an absolutely interchangeable way. Refer to an order of ‘robots’ and not to that of life”.

In the MACRO Testaccio Li Chevalier presents “Polyphony”, a monumental installation composed of violins and 30 experimental ink paintings. Li Chevalier works draw a trajectory with doubts and lightnings along the way, as her quest for beauty takes her to Rome, in her contemporary art journey.