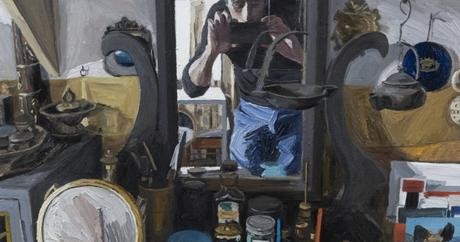 Luca Padroni is an accumulator. Of stories, scenaries, people. Through various painting techniques he explores a reality that is characterised by a multifaceted nature, in opposition to his individual existence, juxtaposing places, human beings and lights that are not always in touch with each other. In this act of balancing made of additions and subtractions, he creates a unique universe where tantric lovers, flying cats, Roman columns, people passing by in search of answers, century-old pines, births and deaths all coexist.

Since the 1990s, after a long formative experience in London, Padroni has combined traditional oil painting with collage, amorphous forms of dripping (in the ethereal cycles of astral scenaries), culminating in the figurative abstractism of the “Crateri” series. The multiplicity of his narrative needs are challenged once again in these recent works, made to fit the spaces in Macro, stemming from the studies on the ethnic and evocative house belonging to Anna Paparatti (painter, sculptor and traveller who has given a great contribution to Rome’s cultural life, from the 1970s onwards, especially for her work at Fabio Sargentini’s Gallery L’Attico, as well as for her work as performer of Julian Beck’s Living Theatre), becoming, in some of the canvases, the basis upon which memories, dreams, and personal obsessions are engraved.

This is how, as if peaking from a distance, as always in his explosive expressionist style, the title of the exhibition arrives: “I valori personali”: values represented through actions, moving with courage; personal because they tell a story about the author himself (behind the hand executing the action), but also the protagonists of the stories that are evoked, whether it’s a centenarian running the London marathon, a painter forgotten by most but loved by the enlightened èlites, a film director that turns a big jump into his final decision.

In a time when we all need space and precision, attention and details, Padroni offers, and expects, time to observe the part of reality seen by his eye. He expects it and obtains it with the visual power of great painting.

In the occasion of the exhibition, a catalogue with critical texts by the curator Claudio Crescentini, and Marco Tonelli, Ursula Hawlitschka, Fabiana Sargentini, will be presented.