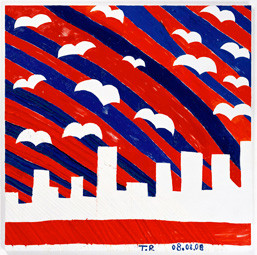 Opening on October 2, Magasin 3 will be hosting an exhibition with Tal R, born 1967 in Israel and based in Denmark. He describes his artistic style as 'Kolbojnik', the Hebrew word for leftovers:
I have a pot on the boil all the time and am continuously throwing new material into it”,
Tal R is Denmark's most widely recognized contemporary painter today. The artist has reached considerable international acknowledgement and was awarded the prestigeous Carnegie Art Award in 2002. Tal R's art is brightly colored with a deliberately naïve, abstract quality and his exhibitions become a voyage of discovery into a universe with a very direct expressiveness, which celebrates playfulness, spontaneity, imagination and creativity. He is probably best known as a painter but works in a number of media: sculpture, drawing, printmaking, installation, video and textiles. Currently he is also developing the experimental clothing brand MoonSpoonSaloon.
Tal R lives in Copenhagen, where he also has his studio. His most recent solo exhibitions include: Bonnefanten Museum, Holland (2008), Camden Arts Centre, London (2008), Louisiana Museum for Moderne Kunst, Denmark (2007). He holds a guest professorship at Kunstakademie Düsseldorf, which he often “swaps” with colleagues at other art academies.