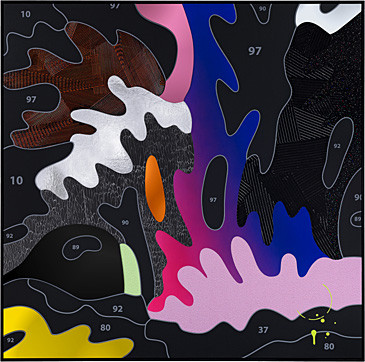 This winter, MAGASIN will present the solo exhibition of German artist Anselm Reyle in collaboration with Deichtorhallen in Hamburg, Germany.

The repetitive use of certain motives and materials is a characteristic feature of Anselm Reyle’s work. He handles a wide range of artistic mediums from painting to sculpture and works from found objects, which have been distanced from their original function, alienated visually and put into a new context. His artistic world is bright and colored. He plays with materials and textures, colors and metallic effects. He assembles modeling pastes, mirrors, glitter and acrylic varnishs to fluorescent colors to revisits the codes of kitsch and ornamental.

His exhibition at MAGASIN will point up the monumentality of the central space under roof, called la Rue which will be the place of a specific work realized for this occasion. The galleries space will gather existing works and will be an overview of Anselm Reyle’s oeuvre.

On the occasion of these two exhibitions, a catalog will be published by Distanz Verlag and boasts countless illustrations, including many images of the installations at MAGASIN, and essays by David Ebony and Dirk Luckow as well as an interview Friedrich von Borries conducted with Anselm Reyle. The book will be published in trilingual version (in English, French and German).

Born in 1970 in Tübingen, Germany, Anselm Reyle studied Fine Arts in Stuttgart and Karlsruhe. Since 1997, he lives and works in Berlin and teaches since 2009 at the Fine Art School of Hamburg.
www.magasin-cnac.org