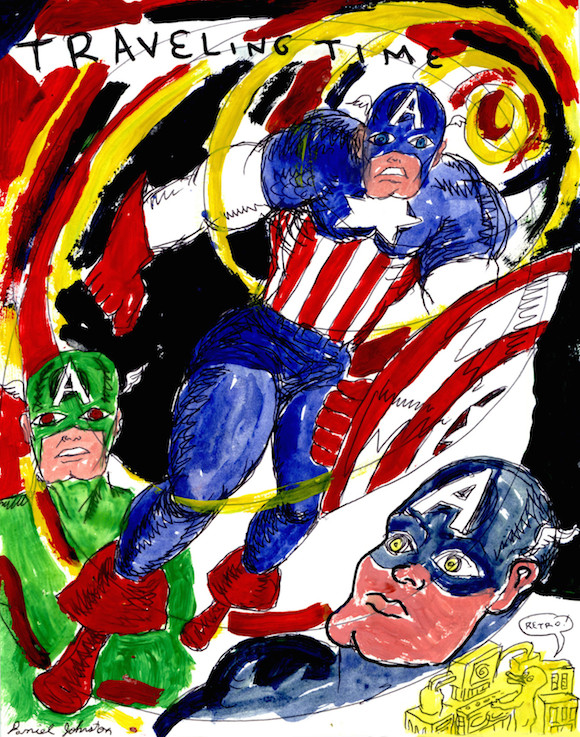 The "Belle Electrique", Grenoble's new amplified musics hall, is scheduled to be inaugurated in just a few months; it is conveniently located next to the hall built by Eiffel that today houses the MAGASIN.
To coincide with this opening, the National Centre of Contemporary Art is dedicating one of its autumn 2014 exhibitions to music's relationship with the arts, a theme already touched upon in a few previous exhibitions.

In 1989, the exhibition "Broken Music" by Ursula and René Block gathered together over 800 artists and designers, while the exhibition "Replay – the punk sphere" (hosted from 4 June to 3 September 2006) presented for the very first time the collages by Linder and the painted banners of "Destroy All Monsters" by Jim Saw, Cary Loren and Mike Kelley next to "Reverse Karaoke" by Kim Gordon and Jutta Koether. The MAGASIN also presented, from 28 May to 10 September 2000, the graphic and painted oeuvre of Gary Panter, a central figure of the Austin music and comics scene.

In the wake of these previous events, the "Art in Pop" exhibition, which opens October 10th, is born of a few simple, commonly shared observations.
Indeed, while it is true that up until the 1960s numerous musicians and singers practiced art as a leisure activity, as something akin to their "secret garden of creativity", it is equally true that beginning during this same decade numerous pop musicians benefitted from art school training, this being especially the case in England. Music and the fine arts became intermingled under the combined influence of the breaking down of the borders between high and low culture and the shifting of the production, identity and style codes of the former (the "high culture" of art and the scholarly disciplines) to the second (the "low culture" of television, comics and industrial cultural production in general).
Pop music would become a two-fold scene straddling art and music in which the musician was also an artist and vice versa, and from which would notably emerge figures producing not only structures but also meanings and aesthetics.

The upcoming MAGASIN exhibition will take the form of a succession of rooms dedicated to individuals or themes gathering together all types of documents (album covers, filmed interviews or concerts) and works of art.

For instance, one of the exhibition rooms will be dedicated to Don Van Vliet, better known as Captain Beefheart, who was born in 1941 in the Los Angeles suburbs. Combining a great number of different influences (blues, rock, psychedelic music, free jazz, etc.) and breaking with the conventions of rock n' roll, he was considered an avantgarde musician. In 1982, he left the world of music to go live in California's Mojave Desert, where he dedicated himself to painting. There he developed a pictorial oeuvre represented by leading galleries (for instance, that of Michael Werner). He remained in regular contact with other artists, notably Sigmar Polke, with whom he also « jammed ».

Another example : John Miller, who was born in 1954 in Cleveland, and lives and works in New York and Berlin. His protean oeuvre (photographs, paintings, sculptures, videos), enlightened by his prolific production of critical texts, has ever questioned the values of our societies, both in the global societal sphere and in the more specific realms of media and art.

His exhibition room will present an ensemble of documents retracing his musical career, as well as a few other oeuvres, such as the video "Life of Phillis" by Tony Oursler. Since studying at the Rhode Island Art School, he has been the member and occasionally the founder of diverse groups :

The exhibition will include rooms organized around : David Thomas – Pere Ubu, Malcolm McLaren, Mayo Thompson - Red Krayola, Daniel Johnston, Alix Lambert. John Armleder will curate a room for an exhibition of his creation that he was never before able to pursue, with Genesis P-Orridge and Alan Vega.