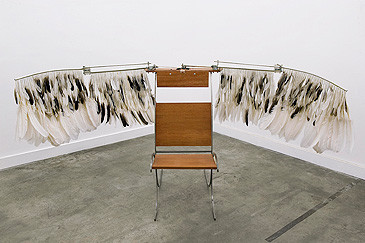 The duo Art Orienté objet was created some fifteen years ago by Marion Laval-Jeantet and Benoît Mangin. From the very beginning they were close to artists like Mark Dion, who invited them to show their work alongside his in group exhibitions. Art Orienté objet are among those few artists whose work examines environmental, anthropological and indeed scientific questions along shared lines, recycling the experimental protocols and methods of representation of those issues.

For Le MAGASIN they have devised an exhibition entitled “L'alalie” [Alalia].
The title chosen which is that of one of the main pieces exhibited designates a moment of “aphasia”, that instant when one can no longer manage to speak, when everything seems to stop. The exhibition brings together a number of pieces most of which have been specially created for the occasion; they have been subjected to an experimental scientific and technical protocol which causes their form to evolve throughout the duration of the exhibition, or even in certain cases causes it to disappear.
The exhibition will bear witness to the growing impression that, where current ecological issues are concerned, we are now confronted only with perpetual contradictions. Can we still act? Each piece is presented as an oxymoron which plays around with the relationship between attraction and repulsion felt by the viewer. Each work produced acts like a freeze frame that demonstrates a contradiction so powerful that the work turns giddy.

This is how Marion Laval-Jeantet and Benoît Mangin sum up the “L’alalie” project: “In the world of the Living where man cuts the figure of a terminal predator, we would like to suggest a science fiction scenario in which the artist leaves the spoken word hanging to offer only works referring to the existential vertigo of disappearance and mutation. For us the most accurate term to define this state would be ‘alalia’, from the name of one of the pieces on show: alalia, a
sudden muteness the mind is only too obviously plunged into. As in the eponymous work in which rare languages disappear alongside common ones, human beings alongside animals, we arrive at a moment when experiment has led us to verbal silence, we can only let the works speak for themselves, ‘recount’ a world in which it is up to human beings first of all to observe.
These works, far from being purely scientific or anthropological hypotheses, are above all active objects, efficacities, that put forward the hypothesis that art is one of the few means of looking into the future. But also that it can produce forecasts capable of ‘curing’ a state in which the world can no longer be apprehended, because its complexity is so great. Therefore all these works bring into play the confrontation of perceptible antinomic elements, a confrontation that
reveals invisible processes. Each of these pieces is derived from something we have experienced.”

Viewers will discover these pieces gradually; they are organized in the exhibition galleries as if following the course of an initiatory journey.
At the entrance to the exhibition, a deep-freeze showcase will present a block of ice cut out of the ice on Spitsbergen by the two artists who will have had to travel on a Danish icebreaker to make their journey at the end of April. This block of ice will carry the outline of the imprint of a polar bear. The whole experience will be shown on film in a small adjoining room.
L’Alalie will be presented in the first main room of the exhibition, a large mural more than eight meters long depicting a planisphere where the names of animal species in the course of disappearance are featured. Their names are written in languages that are themselves in the course of disappearance, and in the center of the image a scanning system gradually erases the data at the same pace as these species are actually disappearing.
And that is only the start of the itinerary...
www.magasin-cnac.org