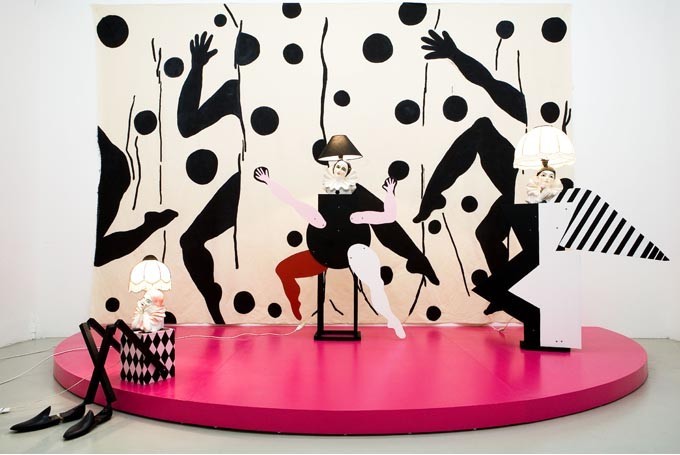 Our first idea was to look into the very generic question of contemporary practices connected to painting, those observable mainly in the production of the generation of emerging artists in their thirties.

More than the issue of painting, too general and too far from the reality of these practices, we retained the notion of the "tableau," which became the title of the exhibition. This exhibition will mainly propose to shift the focus regarding painting from the stretcher to the gesture - to the performative aspects of painting.

The exhibition will bring together twenty one artists who we think propose strong and unique positions.
"Tableau" refers to its literal sense of "a work in paint" executed on all kinds of support media. In its figurative sense, it refers to the idea of a flaw "in the beauty of a work." When it is said to be "vivant", or "living," it is the representation of a scene painted or interpreted by participants remaining immobile or "posed." The "tableau" is also an ensemble of objects, a natural representation that strikes the eye and the mind. It can make reference to an elaborate space-time or even a scene taken in by a brief glimpse.

The exhibition brings together artists working with these notions. Using as point of departure issues like re-covering painting's support media, the figures and objects of its representation and the space of its presentation will stage them and bring them into the order of fictional activities. These either generate the work by producing it materially or performing it.

Existing works and many new works will be presented.