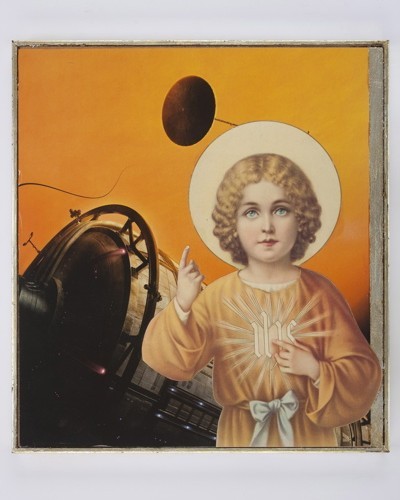 Magazzino is pleased to announce Aleksandra Mir’s first solo show in Italy, curated by Valentina Bruschi. The exhibition comprises a selection of approximately twenty works, a series of collages with hand made guilded frames, produced during the past five years whilst the artist has been living in Palermo, Italy.


“The idea of space travel has always exercised a certain fascination for Aleksandra Mir who remembers when she was only a small child, being struck by the images of the first moon landing. In fact, one of her first performances was precisely, First woman on the Moon in 1999, on the occasion of the 30th anniversary of the Apollo 11 feat, in which she enacted a first “female lunar landing” on a Dutch beach which had been machine-modified in order to resemble the crater-like surface of the moon. The event was filmed by local television and screened worldwide. This “obsession” continued with the Garden of Rockets (2004) project, after a visit to the John F. Kennedy Space Center in Florida, followed by the Concorde Collages (2006) and two monumental projects: Gravity (2006), where she built a gigantic rocket with industrial debris, and Plane Landing (2008), an inflatable sculptural installation that reproduces a 20 metre long aeroplane, anchored to earth and in a permanent state of landing.


And it was working on this type of image that the artist began to formulate the series entitled Il Sogno e la Promessa (The Dream and the Promise), in which she juxtaposes pictures of space exploration to sacred images. Recuperated from second hand markets and religious article shops, these cult effigies are like “ready-mades” that the artist transforms with her manual work. Antique prints, first communion prayer cards and saint cards are combined – through formal similarities and not only – to cut-outs of NASA images, Shuttle missiles and cosmonauts. Therefore, saint’s halos are similar in shape to astronaut’s helmets, rocket’s smoke trails con be overlapped to celestial clouds, the gold decoration radiating around Jesus’s head is identical to the contour of a spaceship porthole. An iconographic and cultural contrast that Aleksandra Mir has experienced personally, moving from the United States to Sicily and, as is often the case in her work, this has been tied to careful observation of popular and mass culture to create visual short-circuits that question our most firm beliefs. Using the ironic key that characterizes a great part of her work, the artist makes the expressions of two clashing cultures converge. On the one hand there is the idea of space, intended as another field of conquest for Man and on the other the popular expressions of Christian faith, in other words, scientific and technological development versus religious tradition. Maybe they are both attempts to give an answer, in two profoundly different ways, to the eternal question posed by Man: what am I doing here?”.

Aleksandra Mir was born in Lubin, Poland, in 1967. Of Swedish nationality, the artist, grew artistically in New York where she lived from 1990 to 2005 and, recently in Palermo, where she has been living for the past five years. Her work has found expression in a variety of media from performance to sculpture, from photography to video, from drawing to book printing and writing. She has been showing in international exhibitions, among many others, recently at 53thVenice Biennial; as well as in Schirn Kunsthalle Frankfurt, Kunsthaus Zurich, Institute of Contemporary Art London, SMAK Ghent, PS1/MOMA New York, Whitney Biennial New York. In 2007 she conceived The Sicilian Pavilion for the 52nd Venice Biennial, in a dialogue with curator Paolo Falcone about the status of Sicily in the world and in 2009 one of her works was presented in the show “Passaggi in Sicilia” at the Riso Museo of Contemporary Art, Palermo.
www.magazzinoartemoderna.com