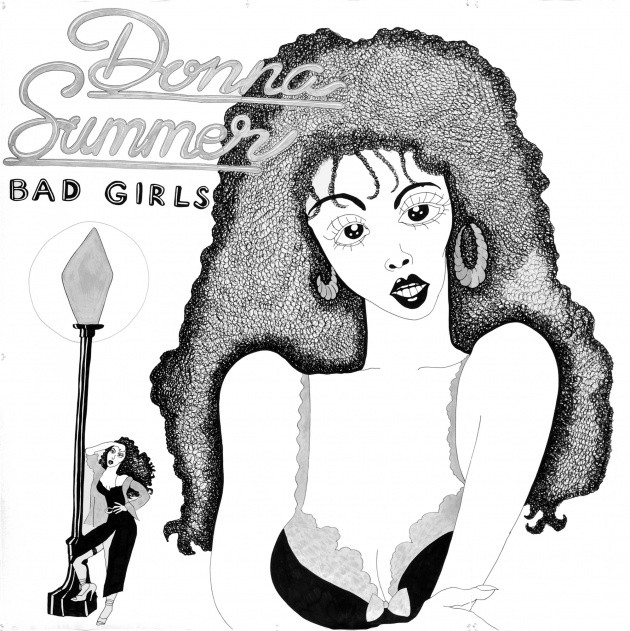 Magazzino is pleased to announce Aleksandra Mir second solo exhibition at the gallery. Titled Discoteca, the show consists of a series of 14 large scale drawings from her Vinyl series – a group of handmade, larger than life reproductions of vintage vinyl records, where each Sharpie pen stroke replicates a groove or where cover images are lovingly traced in a way reminiscent of teenage bedrooms and the manual imperfection of adoring fans, only to expand in craftsmanship and ambition to reach a perfect language of its own.
Created during the artistʼs five year residency in Palermo (2005-10), the source records on which the series is based on were originally found in local private homes, and range from Italian classics to foreign licenses produced in Italy, including household names such as Fausto Papetti, Loredana Bertè, Elvis Presley, Donna Summer, the Deutsche Grammophon edition of Beethovenʼs Symphony n.6, and La Febbre Del Sabato Sera (Saturday Night Fever).
Universally associated with the now defunct concept of music as a tactile experience, vinyl records are now representative of a romantic and imaginative age, where cover art was often enthusiastically deployed to match if not outstrip its contents. Filtered through the immediacy of drawing, photographs and logos are consequently translated into symbols of a cultural climate, following Mirʼs predilection for reframing the purpose of existing informational media, like maps, newspapers and, most recently, vinyl records, and enriching them with new, unexpected meanings.
www.magazzinoartemoderna.com