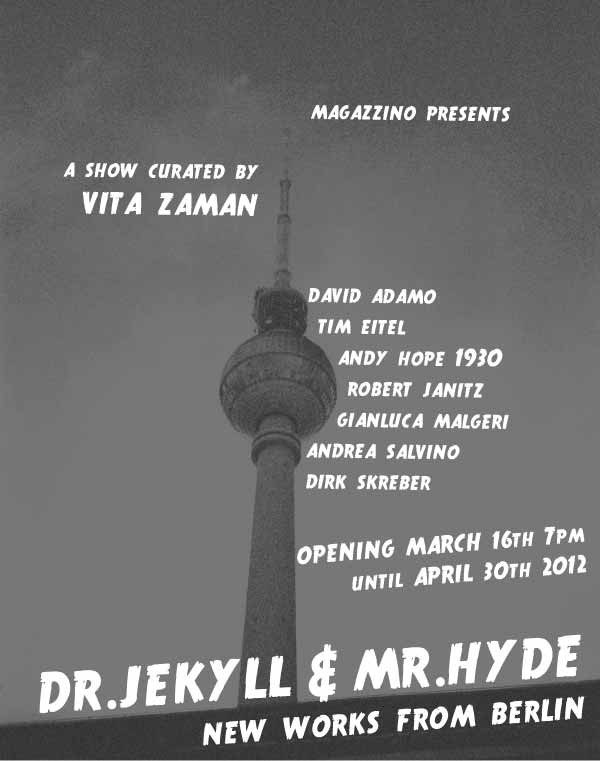 “It was on the moral side, and in my own person, that I learned to recognise the thorough and primitive duality of man; I saw that, of the two natures that contended in the field of my consciousness, even if I could rightly be said to be either, it was only because I was radically both; and from an early date . . . I had learned to dwell with pleasure, as a beloved daydream, on the thought of the separation of these elements.”
(R.L. Stevenson – The strange case of Dr. Jekyll and Mr. Hyde)
Magazzino is pleased to present Dr. Jekyll and Mr. Hyde, a group show curated by Vita Zaman with the participation of David Adamo, Tim Eitel, Andy Hope 1930, Robert Janitz, Gianluca Malgeri, Andrea Salvino, Dirk Skreber. Taking cue from the famous novel by Robert Louis Stevenson, the exhibition displays a kind of emotional script that narrates, through a play of mythologies, excesses, realities and absences, extreme and barely visible visual states, the complexity and wideness of painting related positions and researches through the works of the seven participating artists.
This research articulates between the materic abstraction by Robert Janitz, the cold and metaphysical atmospheres of Tim Eitel’s paintings (almost noir, according to the movie/literary figures we’re using), the anti-historic and explicit figuration of the paintings and drawings by Andrea Salvino, to the neo-pop references of Andy Hope’s and Dirk Skreber, the latter crossing the border into the field of sculpture. Sculptural are also the expressions of David Adamo and Gianluca Malgeri, linked in different ways to Arte Povera, on one hand, a gesture and performative manipulation of materials, revealing its bare equilibriums and highlighting new semantic and symbolic functions (Adamo); on the other hand, the use of a trace-object, a remain, a rewritable and recombined element into some sort of archaeology of the present, that is, a central theme within Malgeri’s oeuvre.
With the intention of giving a concrete spatiality to this concurrence of positions and gestures, the exhibition is articulated between the spaces of the gallery as a confused discourse, sometimes crowded and rarefied at the same time, a schizoid flow of images that doesn’t negate, but rather suggests, the possibility of a dialogue between such different actors.